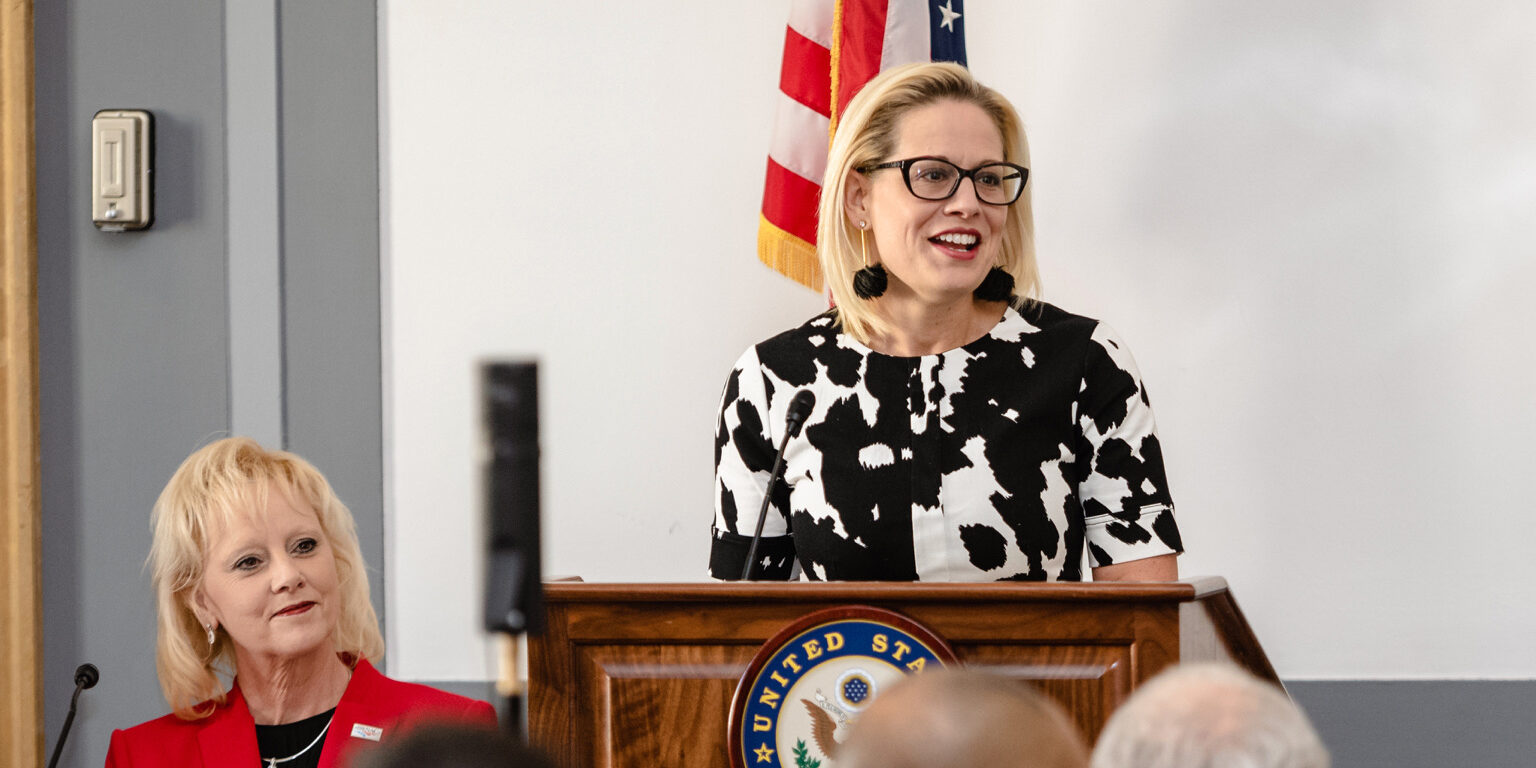 Sinema-tography: Why Analysis of Kyrsten Sinema Might Need To Be Reworked: 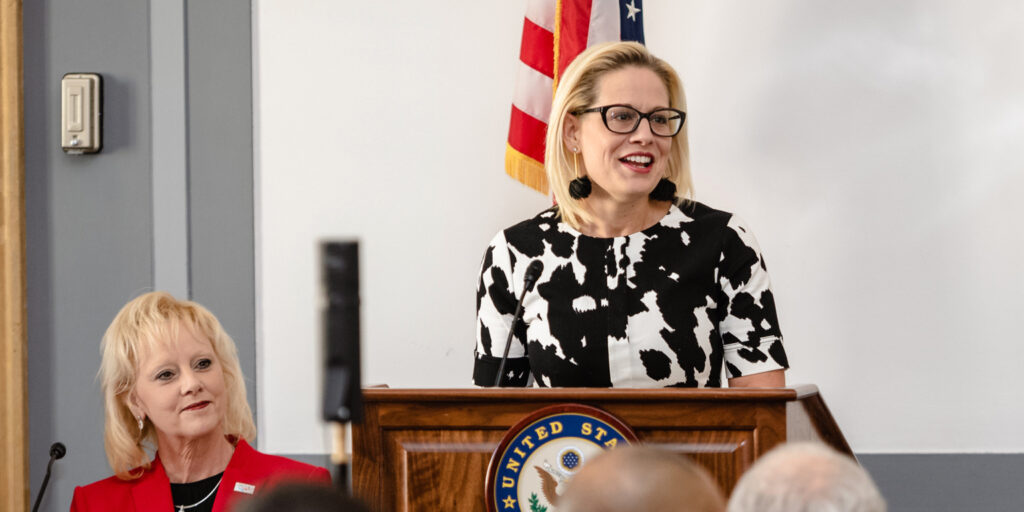 In a 50-50 senate, you are bound to see reporters and political analysts draw towards certain figures, as they can dictate how the party in power’s agenda could unfold. For the Democrats, there are two of these figures who have received much attention.

The first is West Virginia Senator Joe Manchin, who has been known to be at odds with Democrat leadership figures and makes his positions very clear when he is uncomfortable with certain plans.

The other is Arizona Senator Kyrsten Sinema, who has molded herself to be the “maverick” of the caucus, often going her own way on how to get things done and bucking plans that are favored among all of the party, such as rolling back the Trump tax cuts to pay for the Build Back Better act.

Of the two, it seems that Krysten Sinema draws the most ire from left-leaning observers, voters, and even some analysts and reporters. While Manchin is more dramatic and is described as the one senator to be out of step with his caucus, there is some reason for that. He hails from West Virginia, a state that is becoming more Republican by the second, as traditional Democrats have switched parties due to the national party barely resembling what it was back in the day. He is the way he is because this is what Appalachian Democrats used to be!ieve.

Sinema, on the other hand, hails from Arizona, a state that has become a battleground in the 2010s and 2020s. Unlike Manchin, who has always been the way he is, Sinema has changed and evolved as a politician, going from a green party firebrand to a moderate Democrat. For many, Senator Sinema’s actions and ideology simply do not make sense; others feel she is doing this to rake in money from high dollar donors and corporations.

But I am not here to talk about Sinema’s past, nor her future, nor her reasons to support certain legislation over others. No, I want to talk about her time as a Senator and what she has done so far in the infrastructure/Build Back Better saga.

Why do I want to talk about this? Well, I believe that analyzing Senator Sinema from an ideological or financial perspective is the wrong approach. Sinema wants to be recognized for her legislative accomplishments rather than the items around her. By doing so, I have discovered something rather surprising that could explain a lot about her actions as a legislator rather than a person:

Senator Krysten Sinema is not a Senator, she is a House member wearing the clothes of a Senator.

What do I mean by this? Well, let us go back a bit to analyze Sinema’s time as a state legislator.

Many are aware that Sinema started as the firebrand green party member that was deemed too extreme for the Arizona legislature back in 2002. But many are not aware that for Sinema to gain entry to the House, she needed to compromise. POLITICO wrote an article on October 27th titled: “What’s Kyrsten Sinema Up To? It’s Pretty Obvious” where the main thesis was that Sinema’s actions were based on herself rather than party loyalty. In that article, Hank Stephenson notes that Sinema had to compromise some of her identity to join the statehouse. This meant shedding her label of being a green party member, working with House minority leader David Lujan, who was once a registered Republican and whom Sinema did not like, and even working with Republicans, which made many of her friends skeptical.

The idea that working with the other party would be seen by some as a compromise of ideals. Sinema however, saw it as the key to unlock a skill that would define her as a legislator: passing a mammoth amount of bills.

Probably the most famous work she did as a state legislator was in 2006, where she managed to drum up support for a breastfeeding bill to ensure that those in public would not get charged for indecent exposure. Her ability to get Republican Tuscon legislator Jonathon Paton to sign onto the bill was not based upon raising outrage nationally or on television, but by putting her head down and using the legislative tools and skills she had obtained over the years, such as hearings, emails, and fundraising to get support from him and the conservative wing.

This ties into one of Krysten Sinema’s biggest qualities that sets herself apart from the rest of her colleagues in the Senate: her directness.

Senate members, at least this year, like to take their negotiations to the camera or at the podium, offering wide-ranging viewpoints of how they want things to play out, and what their thoughts and feelings are regarding negotiation. Sinema, on the other hand, will go straight to the heart of the problem, offering a more direct negotiation similar to the House of Representatives, where one on one conversations are more likely to happen.

Naturally, this makes some sense, Sinema originally hails from the House as part of the Blue Dog Coalition and has some allies in the group, such as Josh Gotthimier of New Jersey. During the infrastructure talks, she chose to align herself with the Moderate Nine group over Joe Manchin, including demands that the infrastructure bill be passed first before any sort of deliberations of the Build Back Better act be considered.

Granted that’s because the infrastructure bill was her baby, with conversations and construction of said bill being led by herself with Manchin taking a back seat. At the same time, she knows what she wants in the planning of the bill, not choosing to go full blast like a Senator at a podium but rather be more direct with President Biden like a House member being more direct with the Speaker or a leader of their caucus.

Sinema appears to have a genuine belief that the best way of getting things done is not to put on a song and dance, despite how many say that her clothing choice does just that. The clothes are the outside Sinema. The inside Sinema does not have the time to let negotiations get out of context as that would probably mess things up in the long run. Instead, she will find the battles that work and go directly to the heads of the legislative process as she has this desire to pass bills. Instead of messing around with the Caucus to find a way to get a plan for pay fors, she went directly to Elizabeth Warren, Ron Wyden, and House Ways and Means Chairman Richard Neal, as she knew that these three would be the best people to ask and help explain her position to get pay fors for the Build Back Better act.

She even managed to build trust with Congressional Progressive Caucus leader Pramilla Jayapal, after a one-on-one meeting that helped clarify what the red lines of each member were.

Some have claimed that Krysten Sinema has no desire to pass the act, but that theory doesn’t hold much water. In a call to local Arizona reporters that was picked up by the Arizona Republic, Sinema said that while she is glad the infrastructure is ready to go to President Biden’s desk, the Build Back Better act has to be passed at some point as well. She gave praise to both Biden and Majority Leader Chuck Schumer for helping guide through the process.

She also acknowledged that some fights can be bipartisan and some cannot be sold to the GOP. Unlike Manchin, who has tried to corral GOP members on some sort of variation of the Voting Rights Act, Sinema has not attempted to do the same so far. Earlier this year, she expressed concern to Schumer that it might be difficult to pass this kind of bill under these conditions. She also agreed that paid leave must be in the reconciliation bill, suggesting that even though Manchin thinks he can get the GOP to agree on it, Sinema might think that this is an effort not worth trying.

What she does think is worth trying is paid leave and immigration, something that GOP senators might be open for. Sinema said that after the break and the passing of the BBB, she has been in contact with the group of ten bipartisan Senators, and says that those are two priorities that she wants to work on finding a solution.

Some will accuse me of defending Krysten Sinema, but that is not the point of this article. The point is to understand where Kyrsten Sinema is coming from as a legislator, not as a person. She believes that she can woo Republican senators to pass legislation. She prides herself on being a champion of getting things done such as the infrastructure bill. She thinks that her way, due in part to the successes she has had as a house member, is the best way of passing legislation in the Senate. This all remains to be seen as 2022 rolls along, but at the end of the day, this is how Krysten Sinema legislates. Not as an ideologue with wide-ranging statements, but with a direct, business-like attitude and desire to bring wins home for Arizona.

Sinema-tography: Why Analysis of Kyrsten Sinema Might Need To Be Reworked: