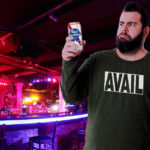 “There’s no way the weight gain I’ve experienced since I started drinking at shows in high school was caused by beer!” said Matt Hartsell, the group’s leader, while shotgunning a PBR and spitting all over the front row. “This junk science–a false flag operation if I’ve ever seen one–is meant to keep us from experiencing the freedom of drinking a 12-pack of Blue Ribbon in the parking lot between bands! There was a documentary called ‘Road Soda’ that Facebook took down last week and it proved that exercise and nutrition are propaganda created by the liberal deep state elite to keep us running on a treadmill instead of back to the bar.”

Jason Bonham, Hartsell’s former roommate and witness to the stage takeover, came away from the experience with more questions than answers.

“That group brought up some good points. Everybody wants to call them crazy, but I only drink at shows and keep getting bigger and more uncomfortable. I’m glad they’re asking questions because something weird is going on here,” Bonham said between long, trash-scented belches. “Moshing for 30 or 40 seconds every two songs is more than enough physical activity to maintain the physical fitness I had in my early 20s. I’ll check that documentary out on YouTube and follow some of these people on Twitter just to get all sides of the story.”

Primary care physician Kaleb Robins worries about the well-being of his former patient and associates.

“This uprising is being led by a man that crushed a sixer in the parking lot before his last physical. I thought he was a nihilist–I didn’t realize he was actually health-illiterate,” Robins lamented between patients. “I started my career in the latter days of MK-ULTRA. We did some shady stuff, but we never messed with beer. And I’m pretty sure the documentary Matt keeps referencing was a bit from a comedy podcast, but I won’t send him to AA yet. If I do, he’ll storm another stage in six months to abolish the 21st Amendment. Matt does not understand moderation.”

At press time, the group issued tweets declaring that craft beer has psychoactive properties placed there by the FDA, CDC, and NSA to keep microbrewing and macrobrewing enthusiasts divided.

The post Skeptics Question Scientific Link Between Weight Gain & Drinking 12 PBRs At Every Show appeared first on The Hard Times.