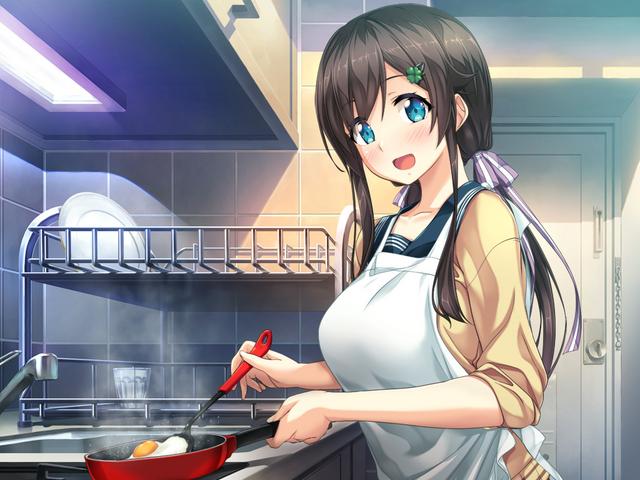 Can a pair of childhood friends keep their feelings at bay while living together? Find out in AZARASHI SOFTWARE’s AIKAGI, a romance visual novel published by Frontwing USA on Steam.

AIKAGI is a slice of life romance visual novel about a young man named Sunohara Nozomu. During the last winter of his studies, Nozomu’s parents begin asking him to move out and learn how to live on his own. Despite their requests, he fails to find a suitable place to live and has little idea about how to take care of himself.

Eventually, help finds its way to Nozomu in the form of his childhood friend Takanashi Shiori, who proposes that he could live with her. Nozomu isn’t thrilled about the idea, but once Shiori speaks with his parents, they agree that he should give it a shot. The two of them eventually decide to live together for just a month. This experience slowly changes Nozomu, who begins seeing Shiori as not just the girl he used to play with, but as an attractive woman. Just how will he handle his newfound feelings for her?

As a kinetic visual novel, AIKAGI features a linear narrative focused entirely on the growing relationship between Nozomu and Shiori. The story was written by Momiage Lupin-R, with character art from Gintarou.

"AIKAGI" is a visual novel. More specifically, it is a kinetic novel, without any branching routes.

During the last winter of his student days, Sunohara Nozomu finds himself at his wits' end. His parents told him to move out on his own to learn how to become more independent, but he's having trouble finding a place that feels like home, not to mention he's never even cooked for himself!

At first Nozomu isn't sure if living with someone will really help him become "independent," but Shiori convinces his parents to let him live with her, and before he can give it much thought, everything has been arranged. They agree to live together for one month so that Nozomu can learn the ropes of living alone.

Experience the excitement of a new life together with your childhood friend!

AIKAGI is now available on Steam for $19.99. Adult content has to be installed separately, this is done using a free patch available on the publisher’s website.