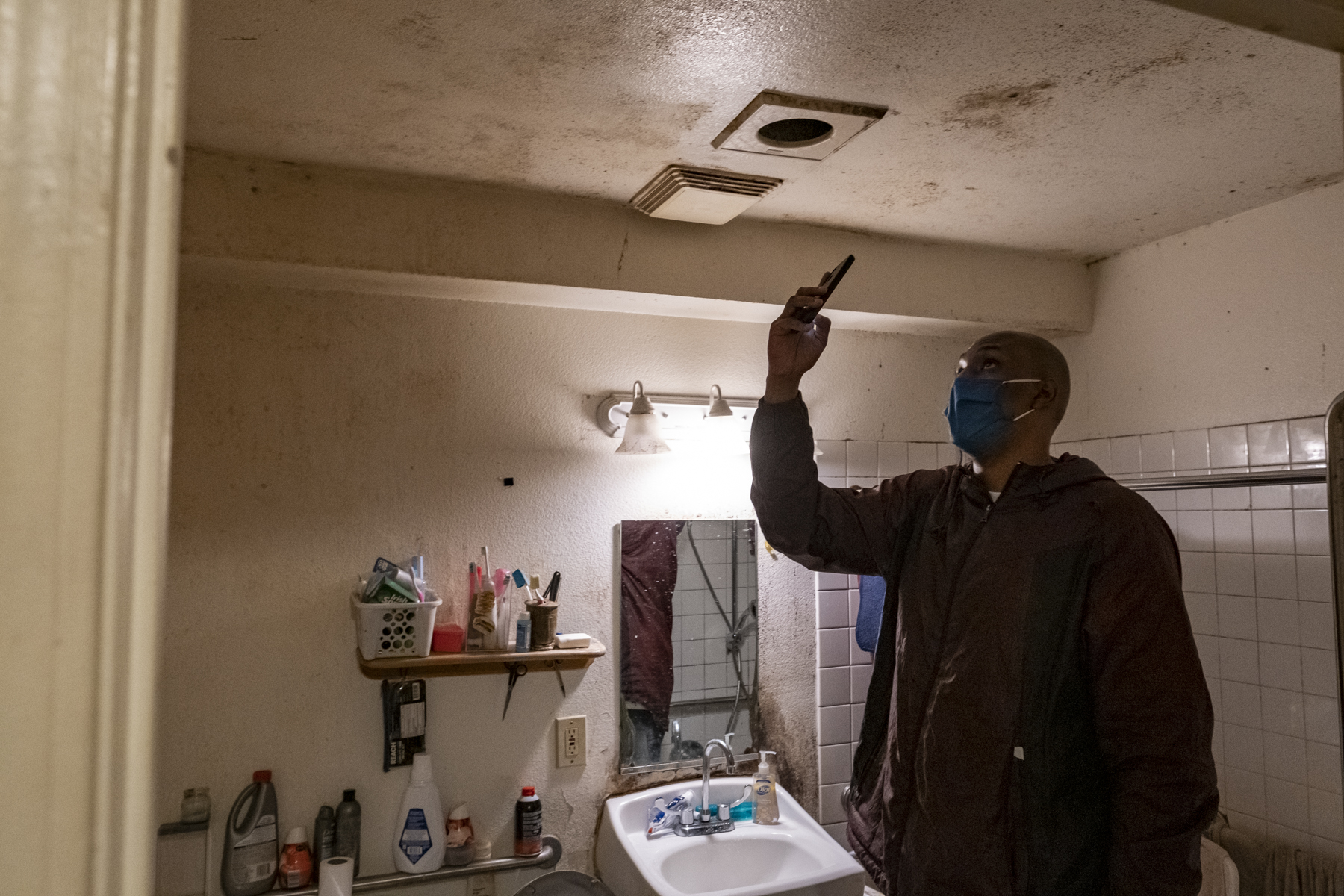 Six months after San Francisco agreed to lend the developer of a run-down Western Addition public housing complex $2.7 million for emergency repairs, the work is behind schedule and many residents at Plaza East Apartments say their units remain damaged by mold, leaks and pest infestations — even after repairs were done.

The city loan includes funds for sewage repairs, replacement of electrical panels and dilapidated appliances and fixtures, fire alarm upgrades, and new streetlights, as well as $198,000 for social services. Five months into what’s projected to be a year-long program, $476,000 has been spent and 25% of repairs are complete, according to the Mayor’s Office of Housing and Economic Development.

Though contractors have made some fixes, including fire alarm updates, new street lighting, and repair or replacement of some washers, dryers, refrigerators and dishwashers, many residents said they are still struggling with broken appliances, deteriorated flooring and inadequate repairs.

Juan Jones, for example, said his ceiling started leaking less than two weeks after maintenance personnel patched a hole in his bathroom floor caused by a burst pipe. The videotaped leak, which Jones said occurs when the shower is used, began at least four months ago and drips through an electrical box.

Jones, one of 18 tenants suing developer McCormack Baron Salazar over health and safety concerns, detailed a litany of other repairs he is waiting on. These include faulty appliances, kitchen tile separating from the floor, a broken window and non-functional electrical sockets.

“This is how they pretty much treat the Black community living in projects,” he said. “It’s really, really messed up because there’s people with worse conditions in their house than me and they live in it every single day — and nothing is happening.”

McCormack Baron Salazar rebuilt the public housing complex with 193 units in 2001 and managed it until June, when the John Stewart Company took over day-to-day management following a San Francisco Public Press report in March that revealed the development’s dilapidated conditions.

After over 170 units were inspected in March, the city granted a loan to McCormack Baron Salazar in April for emergency repairs. San Francisco has made similar loans for repairs at other public housing sites over the years, including $1.1 million for the Sunnydale and Potrero public housing sites in October 2017.

Emergency repairs are mostly conducted based on issues observed during the March inspections, but some residents who have grappled with decrepit fixtures and appliances for years said they were surprised to hear from maintenance workers and inspectors verifying repairs that these problems were not listed in their unit’s work scope.

The Mayor’s Office of Housing and Community Development has the power to approve new items within budget that meet loan requirements but repairs not listed in the original scope are added to a long list of work orders.

In some cases, residents claim workers repaired functional items while leaving unaddressed other problems they alerted McCormack Baron Salazar to over the years.

The scope of repairs for Rockesha Norris’ unit included minor work on her daughter’s closet door and a fire alarm upgrade, according to city records. However, Norris said she has notified management many times about a leak that has flooded her kitchen and daughter’s room every time it rained over the last six years.

Norris also said she has a washing machine that doesn’t drain, an oven that regularly overheats by several hundred degrees and sinking floorboards where a hole in the floor was patched up two years ago.

“They’re not protecting us,” Norris said, referring to McCormack Baron Salazar. “So many times people are coming and talking to us and we just don’t trust them,” she said.

Christy Davis is another resident who said she struggles with ceiling leaks, due to what she suspects is a problem with one of her toilets. One leak caused a large bubble in her living room ceiling. Another drips through a lightbulb in her bathroom, she said.

When maintenance came to address these problems, the toilet on her third floor — not the one causing the leaks — was replaced. The replaced toilet had no issues, she said.

Despite the slow pace so far, emergency repairs are on schedule and budget to be completed in May 2022, said Max Barnes, director of communications at the Mayor’s Office of Housing and Community Development.

However, just 32 units had been completely repaired by Sept. 8, a number that had not changed four weeks later, according to McCormack Baron Salazar. That’s less than two-thirds of the 56 units that should have been completed by then, according to the project’s schedule. Another 104 had been partially repaired.

The developer attributed delays to supply chain issues, resident availability and entry access. The update also indicates the project’s contractor, FineLine Construction, was replaced by a new firm. The developer declined to comment on why this change was made or who the new contractor is.

To ensure tenants receive repairs, McCormack Baron Salazar and its contractors are conducting inspections and taking photos of repair work, which are submitted to the city.

Though the Mayor’s Office of Housing and Economic Development and the San Francisco Housing Authority meet with McCormack Baron Salazar weekly to discuss construction progress, many residents remain dejected.

“Every day you live here, it costs you something from your life,” said Khaled Alaydi, whose apartment was flooded several months ago by faulty sprinklers. Though maintenance workers provided machines to clear the water out, Alaydi’s father, Ahmad, said the family’s electricity bill that month jumped from their typical balance of $35 to $1,000.

New management took a copy of the bill and the younger Alaydi said he believes that management will take care of it, but for now the cost remains on the family’s balance. The family said it was not compensated for items damaged or destroyed during the flood and still struggle with roaches and mold in their bathroom. They are plaintiffs in the lawsuit against McCormack Baron Salazar.

Many residents described years of repeated requests for repairs that went unaddressed.

Even though McCormack Baron Salazar began hosting monthly community meetings and distributing letters and posted notices to residents regarding repairs after the loan was approved, many still have questions regarding the repairs process. Sometimes these are answered once maintenance crews or inspectors are on site, but these after-the-fact conversations leave little room for residents to raise awareness of problems in their unit before approved repairs take place.

Housing Authority Board President Joaquín Torres called attention to tenants’ comments regarding the developer’s failure to meet commitments and a lack of transparency and communication during a special meeting on July 13.

“MBS is committed to undertaking the emergency repairs at Plaza East in a transparent, efficient, and timely manner,” she wrote in an email to the Public Press. “Should any resident have a concern about the state of their unit or the timing of repairs, we urge them to contact property management by telephone, email, or visiting the main office so we can address the issue as quickly as possible.”

Long-term plans for Plaza East remain murky, as emergency repairs were never intended to be a lasting solution. In April, the United States Department of Housing and Urban Development denied an application by the developer to demolish Plaza East and replace it with a mixed-income apartment building containing up to 550 units.

Adhi Nagraj, McCormack Baron Salazar’s senior vice president, told the Housing Authority’s Board of Commissioners in July that the best course forward is to apply for the newly expanded Rental Assistance Demonstration/Section 18 Blend. This program expands the number of projects that can be demolished and rebuilt by creating a graduated scale for their required construction costs.

The Section 18 application for Plaza East was not approved in April because it did not meet the requirement that repairs would cost over 57.14% of the price to rebuild. With the new program, repair projects that meet 30% of housing construction costs are eligible to qualify.

In the meantime, emergency repairs are scheduled to continue under McCormack Baron Salazar’s supervision, with day-to-day administration and non-emergency repairs handled by Plaza East’s new management, the John Stewart Company. Residents gave mixed reviews of the group. While some tenants said they believe John Stewart is doing its best, others expressed frustration with the lack of follow-up when requesting non-emergency work on their units.

Dennis Williams, a resident who is part of the ongoing lawsuit, is advocating for tenant oversight by calling for elections to replace the Tenant Council President Martha Collins, who he said has served beyond term limits. Williams is starting a Black-owned management company with other residents in the hopes that tenants can oversee their own buildings.

“We don’t want to lose our culture and our community,” Williams said.

Support for this story was provided by the Fund for Investigative Journalism. Thanks also to the Investigative Editing Corps, which helped launch this series, “Public Housing in Private Hands,” in 2020.