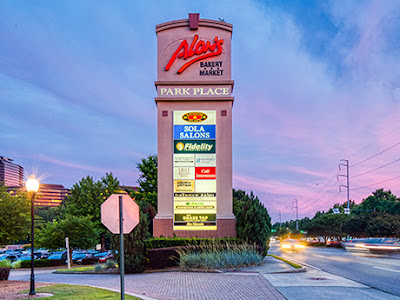 Park Place in Dunwoody has been sold.  Coro Realty Advisors, which purchased the 82,097 square foot retail property in 2009, sold it on December 9 to EDENS for an undisclosed sum.  Located at 4505 Ashford Dunwoody Road, Park Place sits on 13.5 acres and is located directly across from Perimeter Mall at the intersection of Ashford Dunwoody Road and Perimeter Center West.

Built in 1978, the property is anchored by Alon’s Bakery & Market, Fidelity Investments and Jared, The Galleria of Jewelry. At the time of the sale, the property was approximately 92% occupied including tenants such as retailers Allen Edmonds and H. Stockton as well as restaurants Eclipse di Luna, Cafe Intermezzo, McKendrick's Steak House and The Brass Tap, among others.

In addition to buying Atlanta assets, EDENS has also sold several Atlanta centers in recent years.  EDENS sold the Target/Publix/Dick's-anchored Lenox Marketplace in Buckhead in April for approximately $73.9 million, followed by the Publix-anchored Alpharetta Commons in Alpharetta for $24.6 million in May.  In late 2018, the firm also sold the Kroger-anchored Sandy Plains Centre in East Cobb for $44.2 million.

In Park Place, EDENS has acquired a legacy asset in a desirable sub-market [Central Perimeter], but one that will soon face increased competition from new and updated properties nearby.

Perimeter Mall is adding new freestanding locations of Lazy Dog and Buffalo Wild Wings to its Ashford Dunwoody facing parking lot.  Ashford Lane (formerly Perimeter Place) is attempting to breathe new life into the circa 2006 power center.  Upcoming new additions to the center include Jeni's Splendid Ice Creams, Brown Bag Seafood, Sweetgreen, Superica and a foodhall called "The Hall."  The project is also eliminating some of its vehicular drives in favor of what it calls "The Lawn," a greenspace.  The new Publix-anchored Perimeter Marketplace is slated to debut in early 2022 and will bring not only a new grocer but also restaurants like Chopt, Burger-Fi, First Watch and Panda Express, among others.  Last but not least, work has begun on High Street, a $2 billion mixed-use project that also recently signed its first tenant: Puttshack.

What current or upcoming Perimeter area project are you most excited about?  What types of businesses would you like to see open in Park Place or the Perimeter area in general?  What is your favorite current Park Place tenant?