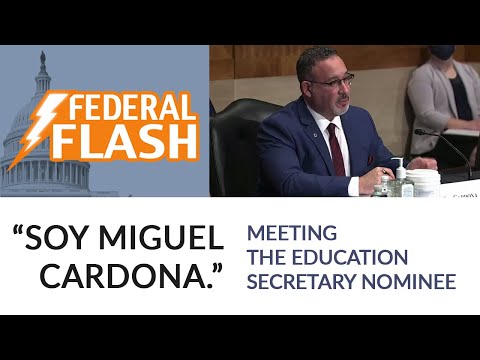 Dr. Miguel Cardona sails through his confirmation hearing to be the next U.S. Secretary of Education, Congress begins the process to pass President Biden’s $1.9 trillion American Rescue Plan, and the House removes Representative Marjorie Taylor Greene (R-GA) from the education committee.

The hearing for secretary of education nominee Dr. Miguel Cardona was a breath of fresh air for those who may never forget the confirmation hearing for former Secretary of Education Betsy DeVos. Dr. Cardona expressed himself as an experienced educator and a passionate advocate for public schools. There were clearly some differences of opinion between Dr. Cardona and some of the committee members, but the hearing was quite cordial and the Ranking Republican on the Committee, Senator Richard Burr (R-NC), indicated he would support Dr. Cardona’s nomination.

This was the first hearing of the Senate Committee on Health, Education, Labor, and Pensions under its new leadership. Chairperson Patty Murray’s (D-WA) opening statement described several of her priorities such as addressing learning loss and “the many challenges that existed long before COVID-19 struck but have become so much more severe through the pandemic.”

Senator Burr’s opening statement was a bit different. He began by saying, “My main priority for this committee is health care.” He went on to discuss issues such as private sector innovation and FDA user fees. It caught quite a few of us off guard since this was a confirmation hearing for the secretary of education.

During the hearing, Dr. Cardona was asked about the conditions under which schools should reopen. Specifically, Senator Burr asked whether 100 percent of staff and students need to be vaccinated before a school can reopen. Although Dr. Cardona did not answer the question directly, he pointed to examples of “schools throughout the country that were able to reopen safely and do so while following mitigation strategies.” He emphasized, however, that educators should be prioritized for vaccination and surveillance testing. Dr. Cardona also discussed the need for better communication to address the fear and distrust that has characterized reopening conversations.

Dr. Cardona also faced several questions regarding whether the U.S. Department of Education (ED) should waive federal testing and accountability requirements for the second year in a row. While he did not give a definitive yes or no, his responses emphasized that states should be consulted and will need flexibility, especially regarding how test data is used for school accountability. Dr. Cardona also spoke to the value of assessments for state and local leaders so they can target resources to their most vulnerable students.

At the Alliance for Excellent Education (All4Ed), we agree. That’s why we joined eighteen education and civil rights advocacy groups in a letter to urge Dr. Cardona to refrain from issuing waivers this year and instead call on states to administer their assessments. The letter also supports giving states time-limited flexibility, as needed, to modify their accountability systems. Without accurate, objective, and comparable data, state leaders will lack information about the disparate impact of any unfinished learning and unable to equitably allocate resources, personnel, and services that can accelerate students’ learning.

Another theme of the hearing was expanding access to college and career pathways, including career and technical education (CTE) and dual enrollment. Dr. Cardona repeatedly stressed his belief in the importance of these pathways, as well as the essential role of community colleges in making college more accessible and affordable. In response to a question from Senator Maggie Hassan (D-NH), Dr. Cardona spoke personally about the value of dual enrollment, saying that he will work to expand access for all students.

Dr. Cardona’s commitment to CTE also is rooted in his own experience. He attended a technical high school in Meriden, Connecticut, where he focused on automotive studies, before attending Central Connecticut State University to study education.

While the hearing featured little drama overall, several Republicans used their time to focus on the inclusion of transgender athletes on school sports teams that align with their gender identity. Despite the often heated and inflammatory questions, particularly from Senator Rand Paul (R-KY), Dr. Cardona was insistent that schools must provide opportunities for all students and respect students’ civil rights. He said, “I feel it’s nonnegotiable to make sure that our learning environments are places that are free of discrimination and harassment for all learners, including our LGBTQ students.”

A committee vote on Dr. Cardona’s nomination will take place Thursday, and we hope he will receive bipartisan support and a swift confirmation, based on statements made by Senator Burr and other Republicans during the hearing. We’ll keep you posted.

Last week also marked the official beginning of the special process called Budget Reconciliation that will be used by congressional Democrats to push through additional COVID-19 relief funding. Under normal circumstances, sixty votes are needed to pass legislation in the Senate because of the filibuster. However, Congress can pass a reconciliation bill with only a simple majority in the Senate. The reconciliation process isn’t used often, but it’s been used as the vehicle for major legislation, including tax cuts and portions of the Affordable Care Act.

Last week, the House and Senate both passed a budget resolution beginning the reconciliation process. The resolution sets the broad parameters for the federal budget and directs twenty-five committees to develop legislation to fund President Biden’s $1.9 trillion American Rescue Plan, which includes $130 billion for K–12 education. The legislation will be developed over the next two weeks. The goal is to pass the bill before expanded jobless benefits expire on March 14.

In a victory for common sense, last week the House voted to remove Representative Marjorie Taylor Greene (R-GA) from the House Committee on Education and Labor. In a statement, All4Ed CEO Deb Delisle said, “Rep. Greene’s disturbing harassment of at least one teenage school shooting survivor and her willingness to spread misinformation and dangerous conspiracy theories have shown that she cannot be entrusted to make policy decisions, particularly for schools, children, and their families.”

This blog post represents a slightly edited transcript of the February 8 episode of Federal Flash, All4Ed’s video series on important developments in education policy in Washington, DC. The podcast and video versions are embedded below. For an alert when the next episode of Federal Flash is available, email alliance@all4ed.org.

Anne Hyslop is assistant director for policy development and government relations at All4Ed.