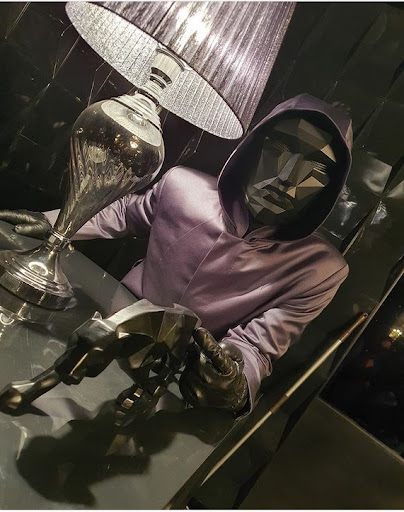 Squid Game - an addictive slap in the face

Impossible not to mention the cultural phenomenon of the year on these lines, but warning / full disclosure: I'm more than a bit biased since I played a (tiny tiny) role in Squid Game.

Just like I've done in the past with other works, I'll simply share my two cents about a creation that's already left a mark on our popular culture. I won't deliver any spoiler, and I won't disclose insider tips (as you may know, in this game, fair play is essential).

What I can say is that joining this adventure, even for only a few days, was a very intense experience, particularly in the middle of a pandemic. And that the whole crew has been amazing, delivering magic at every moment. If the series are such a visual feast, that's because a lot of positive energy and passion has been poured over every single detail.

I can also say that from the start, I knew something special was going to happen. The script was such a page-turner that I simply couldn't put it down. And I couldn't wait to see these wonderful characters come to life. Expectations were very high, but the series turned out to be even more enthralling than I'd thought. Even if I knew every twist ahead, I couldn't escape the flow, and enjoyed the show in total wonder. Squid Game is truly addictive: when it's over you're left in utter withdrawal and craving for more (BTW I'm pretty sure that 99.9% of all viewers let the next episode run right after that cliffhanger end of episode X).

Netflix gave HWANG Dong-hyuk the creative freedom he needed to carry his vision. He could even slice the series in uneven sections. Releasing all episodes at once ahead of Chuseok proved to be a genius move: it not only allowed en masse binge watching, but also changed forever the original series model. 'Ojingeo Game' became the first unserialized series - so fun watching viewers reacting across the world at different stages of 'enlightenment'!

Squid Game doesn't just reinvent the survivor game concept. It's a merciless social satire, literally a slap in the face, a wake up call with a message that resonates far beyond Korea. When it comes to exposing what's wrong in our societies, few stones are left unturned. A riveting story bound to spark conversations about absurd rat races, destructive competition, appalling injustice and unfairness, everyday despair, our relationship to money, to fellow humans... For the reader, it was quite great to imagine Koreans root for a North Korean defector or a (probably Muslim) Pakistani migrant worker (eventually India's Tripathi Anupam).

If there is a lot of wit and humor along the journey, HWANG isn't afraid of pushing hard where it hurts. No holds barred - even more viscerally than in 'Silenced' (2011). And it works. If Squid Game is so powerful and popular, that's because it's resolutely, unapologetically character-driven, radiating with an immense rainbow of memorable, flawed and fallible characters.

Of course, casting big names (LEE Jung-jae, PARK Hae-soo, WI Ha-joon) helped raise interest in the project from the beginning, but I was very curious to see who'd play Sae-byeok and Il-nam, and delighted to watch JUNG Ho-yeon and O Yeong-su give life to cult characters that will haunt you forever. What a roller coaster ride for KIM Joo-ryung along HAN Mi-nyeo's telluric mood swings, and what a diverse collection of Korean talents gracing the screen, even if only for a few moments each (from the hilarious chief police LEE Dong-yong to the discreet KIM Young-sun)...

One key, omnipresent actor in the series remains invisible all the way, yet never hiding behind a mask: the man in charge of the score. I was warned that JUNG Jae-il was a musical genius, and he didn't fail to surprise with his bewitching gamelan-like rhythms, or the playful, medieval joust touch that illuminated the games. Simply brilliant.

Quintessentially Korean, ultimately universal, Squid Game is already permeating the World's popular culture, generating memes, and fueling all speculations about what comes next. All I know is that for the alchemy to work once more, it will have to start with another awesome script. And I fully understand HWANG when he says a Season 2 would require several writers: hard to top that without bringing new voices.

Squid Game - an addictive slap in the face