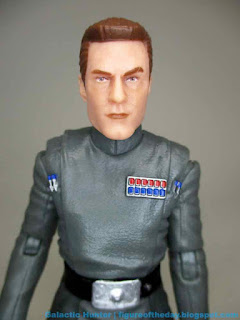 Bio: After the fall of the Republic, Vice Admiral Rampart is assigned to oversee the clone troopers on Kamino by Governor Tarkin. Rampart has eagerly taken to his role in the Galactic Empire as it aims to instill order in the galaxy. (Taken from the packaging.)

Availability: Click here to buy it at Amazon now! 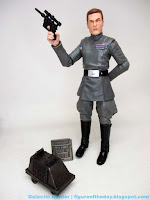 Commentary: There are a lot of aliens, pilots, and other good figures that I don't think will be appreciated in their time. This is one of them. Nobody knew who he was when the pre-order went live and after a few appearances on the show, they still don't know much about him! Vice Admiral Rampart is yet another Imperial stooge who is there to hunt down dissenters, but his whole deal is transitioning the Empire away from clones to citizens for some reason. It's a living.

The figure exists probably thanks to its speedy development - the body parts are shared by Tarkin, Thrawn, Veers, and Piett, just to name a few. I assume it's because of the existing body with 26 points of articulation that this figure exists. After all, you don't need to make new bodies like you would for any of the other recurring characters. There are minor differences between the various Imperials in this scale, and the figure has some minor accuracy issues, but it's a good figure. It's just not an accurate figure. The Imperial Navy rank badge is not always a consistent thing in reference books, so it's not surprising Hasbro's figure uses the same one with the Moffs and Admirals and such rather than the one on the show - which has two code cylinders, two blue rectangles, and four red rectangles. The figure has twelve rectangles - six blue, six red. Most fans probably won't notice (or, frankly, care) but it's the kind of thing that could probably have been done correctly and more easily in the 3 3/4-inch line thanks to more torsos and a system developed to plug in different rank pins from about 12 years ago. The Black Series was not created to be as robust nor as scalable.

It's worth noting that his head is new, and it looks like what it is - a realistic interpretation of a stylized, blocky cartoon head. The shin is a little big, the head is a little thick in spots, and it doesn't look like a specific famous person as far as I can tell. The shading and paint is excellent, but since it's not an exact representation of an actual person it's hard to rate well or not. As an action figure, it looks like an action figure. It resembles his TV appearance, and there's not a whole heck of a lot else to say other than they did a good job bringing a cartoon character into a photoreal space. 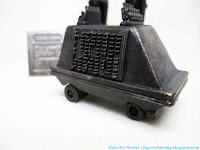 The blaster pistol is perfectly fine, but for $24.99 - a full $2 over the price increase of $22.99 we got earlier this year - I would have liked to see more new elements, like a retooled torso, given that we'll probably never get another figure of this guy. You do get a repack of the Disney Galaxy's Edge First Order Mouse Droid - the scuffing is so similar, I assume it's meant to be the same exact piece - but it's still not a heck of a lot of extra for your money. Tarkin got an Interrogation Droid, Veers got all that armor plus hats. At $22.99, I wouldn't complain, but at this time I'm not quite sure why some exclusives cost more than others, even at the same store, for varying levels of changes.

But hey, if you want a Rampart, this is the only game in town right now and my guess is absolutely nobody will be excited for him until a couple of seasons in the show. You know, after he dies, or joins the Rebels or something.

Collector's Notes: I got mine from Walmart.com.