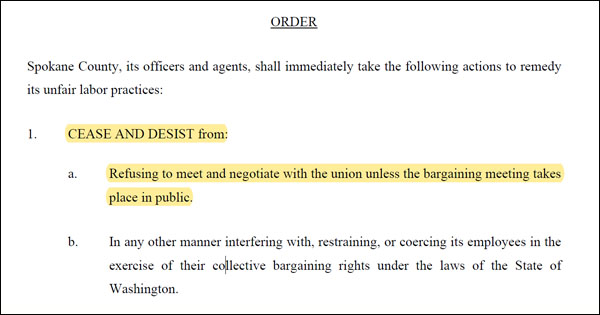 State rules that Spokane County must negotiate with AFSCME

The following is from AFSCME Council 2:

SPOKANE (Nov. 17, 2021) — The Spokane County Commission has been found guilty of an unfair labor practice and ordered by the State of Washington Public Employment Relations Commission to stop refusing to negotiate with the Washington State Council of County and City Employees, AFSCME Local 492, the union that represents the Spokane County correctional officers.

“This decision from the State of Washington, coupled with Judge Tony Hazel’s decision in Spokane County Superior Court in late summer, clearly show the unlawful actions of both the county and the city,” said Chris Dugovich, President of the Washington State Council of County and City Employees, AFSCME. “Judge Hazel’s decision cites the insistence of ‘open bargaining’ pursuant to the city ordinance as unconstitutional and now the Public Employment Relations Commission has ruled that the nearly identical county ordinance is also unlawful.”

Despite the legal setbacks, the Mayor of Spokane has decided to appeal the Superior Court ruling, continuing to spend taxpayer dollars.

“After today’s ruling, it is clearer than ever that Mayor Woodward needs to withdraw the appeal,” Dugovich said. “If the city and county spent half the time they have wasted on a losing ideological legal strategy actually negotiating with their employees, we would have a fair contract — and taxpayers wouldn’t be footing the bill for their wasteful legal costs.”

Dugovich hopes that following this clear ruling for correctional employees out of a contract for nearly two years, County Commissioners will drop opposition to negotiating with workers throughout the courthouse, including members of Local 1553, whose contract expired nearly a year ago.

“This ruling should put an end to the illegal behavior of the County Commission that is only hurting working people,” Dugovich said. “The laws are clear, and the mandate from the state is unambiguous. It’s time to get a contract done.”

PREVIOUSLY at The Stand 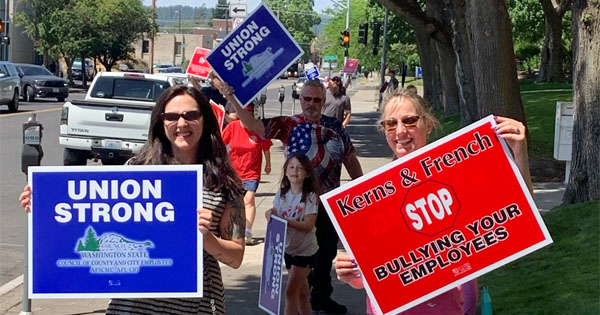 The post State rules that Spokane County must negotiate with AFSCME appeared first on The Stand.

State rules that Spokane County must negotiate with AFSCME