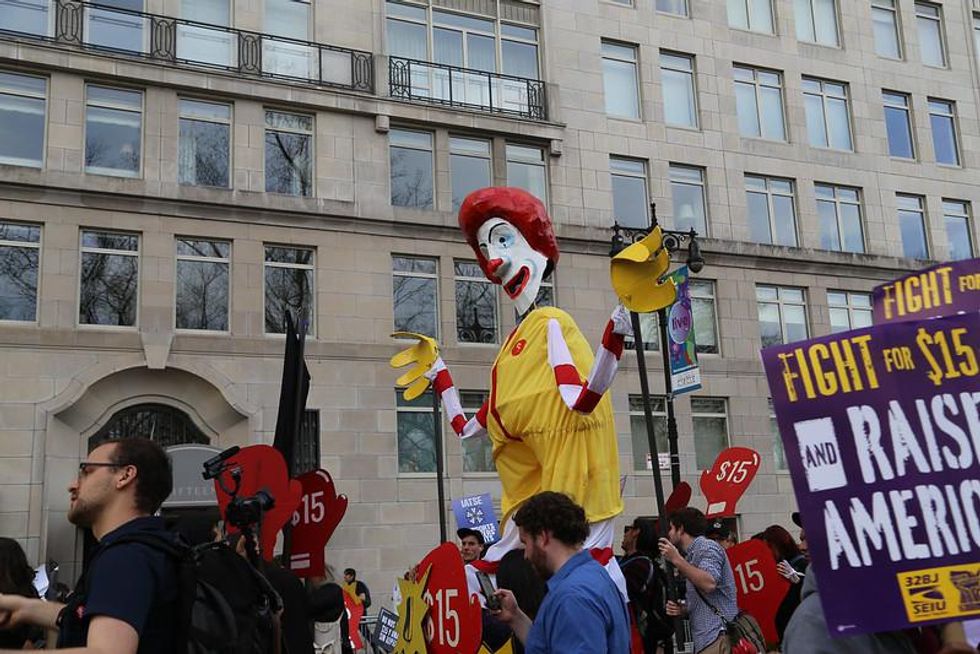 Stimmy Bill Won't Have $15 Minimum Wage. At Least Not This Stimmy Package.

Senate Democrats announced Monday that they've given up an alternate plan to increase the minimum wage, and won't include it in the Senate version of Joe Biden's stimulus bill. After the Senate parliamentarian ruled late last week that raising the federal minimum wage to $15 by 2025 couldn't be done through the budget reconciliation process, several progressive senators pushed to at least raise minimum wages for some workers by imposing tax penalties on big companies that paid less than $15 an hour, but the idea didn't survive the weekend.

Sen. Bernie Sanders (I-Vermont) said Monday that the proposal would have been too easy for corporations to weasel out of, and it's not clear whether using taxes to force higher minimum wages would have helped a significant portion of low-wage workers. Or for that matter, whether it could have won support from the two Senate Democrats who would likely have objected to a straight minimum wage hike, Arizona's Kyrsten Sinema and Joe Manchin of West Virginia. (Sinema is said to object to putting the minimum wage in the relief bill, not the minimum wage increase itself, and Manchin proposes raising the minimum wage to $11 over two years instead of $15 over five, the "functional equivalent" if they go ahead and raise it from there.)

Nonetheless, Sanders said he was far from finished, saying he'd force a vote on an amendment to restore the wage increase anyway, just to get votes on the record.

"This is the soul of the Democratic Party," he said of the proposal. In an acknowledgement that his effort might fall short, he said, "If we fail in this legislation, I will be back" and offer it in the near future.

A Politico piece Monday suggested there might be a fair number of Republicans willing to go higher than $10 an hour, though we're not about to lose any sleep anticipating a sudden outbreak of concern for workers from the GOP. Mostly, I just wanted to mention that piece because it includes this unique combination of words:

Sen. Lindsey Graham (R-S.C.) said he's studying a proposal from Waffle House that would phase in a wage increase to $15 over six or seven years.

Lindsey Graham and a place that sells waffles? The jokes write themselves.

That piece also mentions the possibility that Democrats might try a minimum wage hike again in Biden's second major legislative package, which will focus on economic recovery and infrastructure. That one is also likely to face GOP opposition, so it's already being planned with reconciliation in mind. Politico notes that it might be possible for Senate Democrats to "present the parliamentarian with a different argument" to allow a higher minimum wage to pass by reconciliation. Sounds like a long shot, but worth trying.

Also, with that second big bill in mind, 11 Senate Democratic committee chairs released a letter Tuesday calling on Biden to include both extended unemployment benefits in it, and instead of a single direct payment to America, some sort of recurring payment, although the letter didn't specify how much it should be or how often it should be paid, but that the extended unemployment and the payments should continue until the pandemic is truly over and the economy is measurably better.

"This crisis is far from over, and families deserve certainty that they can put food on the table and keep a roof over their heads," the senators wrote. "Families should not be at the mercy of constantly-shifting legislative timelines and ad hoc solutions."

That clearly makes too much sense, so it must be socialism. One of the signatories of the letter to Biden, Ron Wyden (D-Oregon) introduced a similar proposal for recurring payments last summer.

The MONEY FOR MERICA PLS JOE BIDEN bill that passed the House over the weekend, and will be taken up by the Senate this week with a draft expected today, will extend three emergency unemployment programs through the end of August. The one most people talk about would provide an extra $400 per week on top of whatever states pay in unemployment. The additional unemployment insurance in the CARES Act expired in August, so many people on unemployment lost those benefits until Congress passed a new package in December. Those payments, and the other two emergency unemployment programs (one for gig, part-time, and self-employed workers, the other for folks who've exhausted state benefits) run out on March 14, so Congress wants to get the new stimmy bill to Biden before then.

But instead of each tranche of benefits having a set cut-off, the 11 senators want to see emergency unemployment keyed to actual economic progress. Once the economy is stable, then the benefits would be phased out.

Last summer, we noted that Wyden's proposal would have based the phase-out on state unemployment rates, since not all parts of the country are likely to recover at exactly the same rate. While yesterday's letter to Biden doesn't go into that level of detail, it's a good example of an automatic stabilizer that bases economic aid to people on measurable need, without congressional tinkering.

As to whether recurring payments can get the 50 Democratic votes needed to pass through reconciliation, that's anybody's guess. Here at Wonkette, we are still planning an article titled "How Do You Solve A Problem like Joe Manchin and Krysten Sinema?" with the text consisting solely of "FUCK IF WE KNOW."

Yr Wonkette is funded entirely by readers like you, although personally, we like you best. Don't tell. And if you can, please donate $5 to $10 a month to help us keep this mommyblog going!

Stimmy Bill Won't Have $15 Minimum Wage. At Least Not This Stimmy Package.