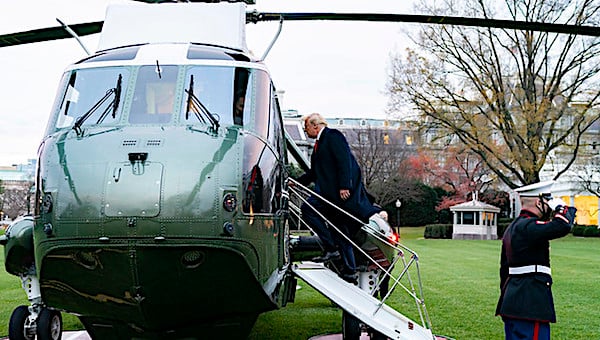 President Donald J. Trump boards Marine One on the South Lawn of the White House Saturday, Dec. 5, 2020, for his flight to Joint Base Andrews, Maryland, to begin his trip with First Lady Melania Trump to Valdosta, Georgia. (Official White House photo by Tia Dufour)

During the first of two failed impeach-and-remove schemes Democrats organized against President Trump, their assumption was that Hunter Biden's dealings in Ukraine, and elsewhere, were as pure as the driven snow.

They were enraged because Trump has requested an investigation of Hunter Biden's dealings.

CNN's Anderson Cooper was on defense for the Bidens, stating, "There is no evidence of wrongdoing by either one of you." Joe Biden himself claimed, "My son did nothing wrong."

Now 18 months later, an analysis in Just the News points out how that story line has been demolished.

It's not insignificant that those protestations of innocence were drummed up by those on behalf of Hunter Biden at the time.

A survey following the 2020 presidential election found more than one-third of voters who chose Joe Biden were not aware of the evidence linking the former vice president to corrupt financial dealings with China through his son Hunter. Had they known, according to the survey commissioned by the Media Research Center, President Trump would have won at least 289 Electoral College votes.

And would be president today, not Joe Biden.

Just the News reported that the Democrats' storyline about the Bidens "is in tatters" because of the evidence – "explosive revelations" regarding open records procedures about the Bidens' dealings with Burisma, the Ukrainian gas company that while Joe Biden was vice president, and it was trying to get rid of a corruption investigation, was paying Hunter Biden more than $80,000 a month.

That episode included Joe Biden's threat to Ukraine to withhold $1 billion in American aid if Ukraine's president did not fire the country's top prosecutor, Victor Shokin.

A French website reported Shokin later filed a criminal complaint naming Joe Biden and accusing him of committing a "criminal offense" in his campaign to get Shokin fired.

Just the News noted that most recently, it reported just days ago that emails the FBI obtained from a laptop Hunter Biden abandoned at a repair shop show Hunter Biden was warned in 2016 by his lawyers he failed to pay adequate taxes to the IRS on $1 million he got from Burisma.

The warning was accompanied by alarm, the report said, but he was subpoenaed by federal investigators regarding his business dealings with his partner, Devon Archer, who later was indicted and convicted.

The report said Hunter Biden's "inner circle" strategized that they would seek a tax extension so he could make changes, and amend his 2014 returns to reflect the right income figures.

Now federal authorities have said Hunter Biden was under federal investigation for taxes starting in 2018, "meaning the probe was under way well before the impeachment drive when Democrats portrayed him as an innocent victim of a political smear," the report said.

Then a recent report from Politico said a U.S. company that worked with Hunter Biden now was under investigation for possible Foreign Agent Registration Act issues.

"And late last year, multiple former State Department officials who worked in the Obama-Biden administration testified that Hunter Biden's role on Burisma, a company the U.S. deemed corrupt, created the appearance of a conflict of interest as his father, then-Vice President Biden, led U.S. anti-corruption policy for Ukraine," the report explained.

Further, Sens. Ron Johnson and Chuck Grassley found, "The Obama administration knew that Hunter Biden's position on Burisma's board was problematic and did interfere in the efficient execution of policy with respect to Ukraine.''

"It turns out there was plenty to investigation when President Trump made the request in summer 2019," the report confirmed, "And that undercuts the carefully crafted story that the Bidens, Democrats and the impeachment trial gave Americans."