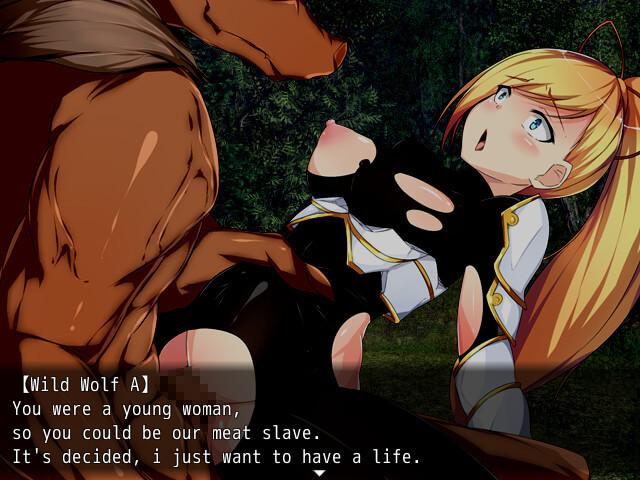 A swordswoman puts everything on the line to remain loyal to her country in Studio Neko Kick’s Pandora’s Box.

In Pandora’s Box, you are put in the shoes of Claire, a female swordswoman who has pledged her allegiance to the country of Rapart. The country has a history that spans over 1,000 years and, in recent history, Emperor Terius has just appointed Claire to be the Captain of the Knights — Claire being the first and only woman to hold that title. With her position, she intends to remain loyal to her country and obey any orders given to her, even if she is commanded to kill her parents.

Right away, Emperor Terius sends Claire on a quest to retrieve Pandora’s Box in the Ludon region. She accepts the request without question, but, unbeknownst to her, there are legends that say anyone who steps foot within Ludon is bound to meet with misfortune. Can Claire endure the upcoming humiliation for the sake of Rapart and the emperor?

At certain parts in the story, you will be thrust into battling a group of enemies. Like usual SRPGs, you must clear the victory conditions for each battle and avoid the defeat conditions. These conditions can vary, but most require you to defeat the boss or survive with your party. Depending on the victory conditions, every enemy on the map doesn't need to be defeated. Maps can have different terrain that may help or hurt you in battle. You can place your characters in tree or grass areas to give them a twenty percent defense boost. Other areas will damage you if you stay there too long.

When in battle, do not let the enemy strike you from behind. You receive five times more damage from being attacked from behind than any other direction. Conversely, this applies also to your enemies, and attacking from the front will make an enemy retaliate. Additionally, some characters are capable of performing counterattacks even when you attack them from other directions. Understanding the strengths and weaknesses of your allies and enemies is the key to your success.

You can find and purchase Pandora’s Box on Steam for $8.99.

If you want to support LewdGamer directly, consider subscribing to us on Subscribestar.