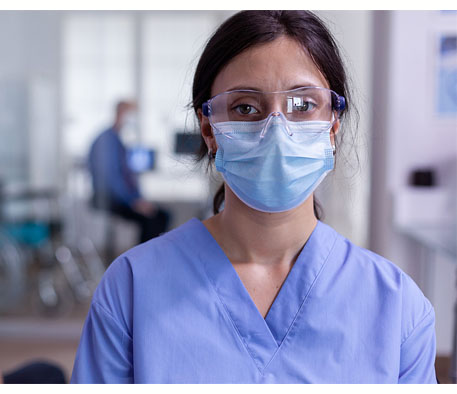 Strike for safety | Infrastructure: WA next | Our new anthem

► From The Guardian — ‘I can’t do this any more’: U.S. faces nurse shortage from burnout — Anxiety, depression and exhaustion, as well as fears of catching COVID, and the witnessing of so many deaths, are among some of the reasons, according to several studies.

The Stand (Oct. 20) — Healthcare unions: WA hospitals must mitigate staffing crisis — WSNA, SEIU 1199NW and UFCW 21: Short-sighted and costly stopgap measures are only a Band-Aid; hospitals have the tools and resources to alleviate burnout nightmare. 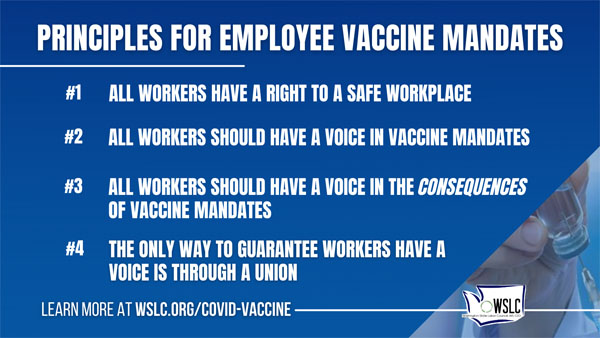 ► From the Spokesman-Review — More than 90% of hospital workers statewide got vaccinated — About 94% of hospital staff are fully vaccinated in Washington, according to updated survey data from a majority of members from the Washington State Hospital Association. “We lost about 2% of staff, and the remaining staff sought and received exemptions and have been accommodated or are in the process of getting vaccinated now,” WSHA CEO Cassie Sauer said.

► From the Tri-City Herald — Nearly 300 Hanford, PNNL workers sue to stop COVID vaccine mandate and save their jobs — About 285 Hanford nuclear reservation workers have filed a lawsuit in federal court, asking that a COVID-19 vaccine mandate be immediately overturned.

► From The Hill — U.S. Army Secretary: National Guard members who refuse vaccine will not ‘continue service’ 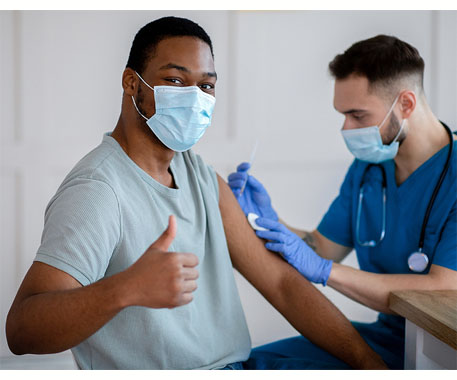 ► From the AP — U.S. expands COVID boosters to all adults, final hurdle ahead — U.S. regulators on Friday opened up COVID-19 booster shots to all adults, expanding the government’s campaign to shore up protection and get ahead of rising coronavirus cases that may worsen with the holidays. But there’s one more step: The CDC must agree to expand Pfizer and Moderna boosters to even healthy young adults. Its scientific advisers were set to debate later Friday. 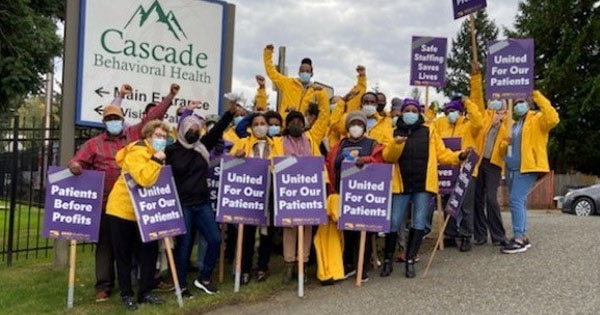 ► From the Renton Reporter — Cascade Behavioral Health workers to receive security staff after months of safety striking — Workers in the behavioral health, nurses, mental health technicians, and support staff at Cascade Behavioral Health voted overwhelmingly on Nov. 10, to ratify collective bargaining agreements that they say raise the bar on quality care, and patient and worker safety standards. The resolution follows an over three-month safety strike by the caregivers, who were spurred to action after a violent incident at Cascade Behavioral Health hospital left nearly a dozen staff members injured. They walked off the job 15 weeks ago demanding dedicated security staff to keep patients and workers safe.

The Stand (Nov. 11) — New Cascade contract is a national model for the industry — After 3½ month strike, Cascade Behavioral Health workers in Tukwila overwhelmingly ratify deal to improve safety and wages.

EDITOR’S NOTE — YOU can demand better treatment at work. Get more information about how you can join together with co-workers and negotiate a fair return for your hard work. Or go ahead and contact a union organizer today! 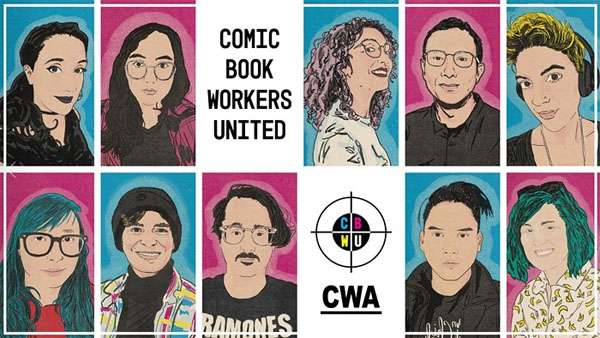 ► From the Stranger — Meet Comic Book Workers United, a union for comics professionals — Founded in 1992, Portland-based Image Comics has been home to Spawn, The Walking Dead, Witchblade, Tank Girl, Wynona Earp … and soon, possibly, a fully recognized union. Earlier this month, ten Image staffers announced that they had formed Comic Book Workers United, a union for comics industry professionals. With support from the Communications Workers of America, the union unveiled nine goals, most of which are consistent with other labor organizing efforts, such as pay transparency and clarity around job functions. 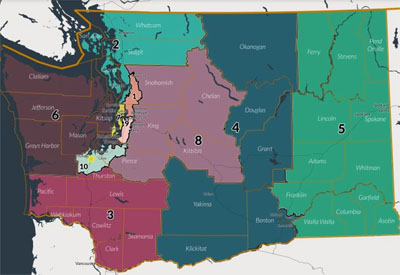 ► From KUOW — Despite missing deadline, commission did draw a map for Washington’s congressional districts — Washington state’s bipartisan redistricting commission released new congressional and legislative maps Tuesday night — a day after its deadline. The mapping job now goes to the state’s Supreme Court. At a Thursday press conference, its members urged the court to use the political maps they created, despite the missed deadline. The proposed map from the commission provides insight into how the state’s congressional districts could appear moving forward, should the court agree. The court has until April 30, 2022 to finish the job. 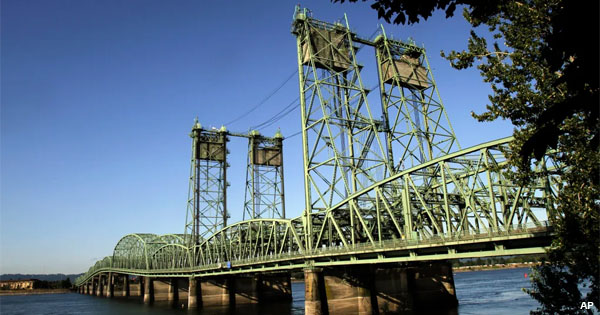 ► From the Seattle Times — Let federal infrastructure funds be a lesson to Legislature and Gov. Inslee (editorial) — The Infrastructure Investment and Jobs Act President Joe Biden signed this week will bring much needed attention and funds to everything from roads and bridges to broadband and salmon recovery. Passed with bipartisan support, the $1.2 trillion spending measure is a critical investment in America’s future. Gov. Jay Inslee and Washington lawmakers must see this as an example to follow, not yet another excuse to keep kicking the state’s own responsibility for a transportation infrastructure package down the road. 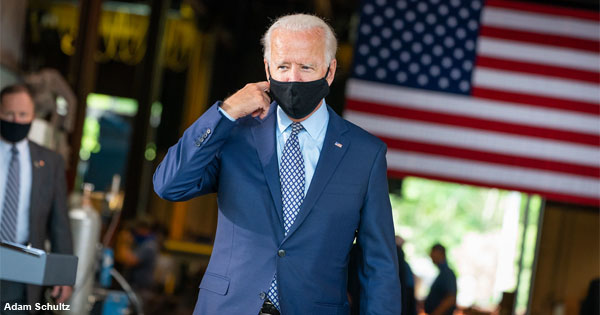 ► From the USA Today — House passes Biden’s Build Back Better bill, sending measure with free preschool, climate initiatives to the Senate — The House Friday morning passed President Joe Biden’s Build Back Better bill, a wide-ranging package of Democratic social spending priorities that includes free preschool, initiatives to fight climate change and affordable housing programs. The legislation was approved on a 220-213 vote clearing a major hurdle for a plan that is the cornerstone of his sweeping domestic agenda to expand the nation’s social safety net, confront climate change, and help Americans bounce back from the COVID-19 pandemic. The measure now goes to the Senate, where it faces an uncertain future.

TODAY at The Stand — Build Back Better bill passes U.S. House — AFL-CIO’s Liz Shuler calls it “one of the most transformative investments in our country’s history.”

► From Reuters — House delays vote on Biden’s $1.75 trillion bill after hours-long speech — The vote on the bill was delayed until Friday after Republican House Minority Leader Kevin McCarthy gave an hours-long, circuitous speech.

► From the Washington Post — Biden expected to replace Ron Bloom, USPS board chair and key DeJoy ally, on postal board — President Biden is expected to announce Friday that he will not renominate Ron Bloom, the chair the U.S. Postal Service board and a key ally of Postmaster General Louis DeJoy, when his term expires next month, according to sources. The move casts doubt on DeJoy’s future at the agency.

► From the NY Times — Wisconsin Republicans push to take over the state’s elections — Led by Senator Ron Johnson, GOP officials want to eliminate a bipartisan elections agency — and maybe send its members to jail. 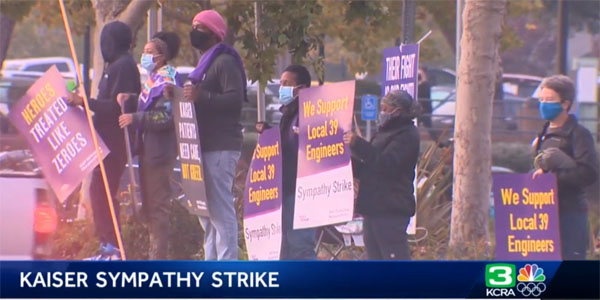 ► From KCRA — Unions hold sympathy strike for Kaiser workers in Northern California — Tens of thousands of Kaiser Permanente workers are hitting the picket line on Thursday and Friday, which could impact patients with non-urgent medical appointments or procedures at facilities across Northern California. More than 40,000 workers with SEIU-United Healthcare Workers West and several other unions are striking in support of Local 39 Operating Engineers. Local 39 IUOE represents about 600 operating engineers with Kaiser. The group has been on strike for more than two months. Organizers call their action the largest sympathy strike in the country.

► From Fast Company — Kroger employees vote to strike as shopping for Turkey Day ramps up — Houston-area employees at Kroger say they’ve voted to authorize a strike. They number 14,000 workers, and for weeks Kroger and their union—UFCW Local 455—have been locked in heated contract negotiations.

► From the Washington Post — A Tesla factory worker alleges sexual harassment is rampant in a rare lawsuit. Now other women are stepping forward. — Jessica Barraza said co-workers commented on her body and touched her inappropriately; supervisors and HR failed to put a stop to the behavior, she alleges.

► Union Siblings, we have a new anthem! Rocker and political/social activist Tom Morello, formerly of Rage Against the Machine, Audioslave and Harvard University, just released a new album with the raucous single “Hold the Line.” It features Canadian-American singer/songwriter grandson (who just released a banger of his own with Kesha and Travis Barker). This Union Strong edit of the “Hold the Line” video pays tribute to prominent strikes past and present, including 1998’s Kaiser Aluminum strike in Spokane. Check it out. And plan on hearing it again soon on a picket line near you.

Nobody said it happens overnight
But if you’re looking for a sign
Remember everybody that stood up before you
Oh, they hold the line
They wanna tell you, you’re already free
Put these chains on and rob you blind
When they co-op the movement
Don’t trip just hold the line
Hold the line

The post Strike for safety | Infrastructure: WA next | Our new anthem appeared first on The Stand.

Strike for safety | Infrastructure: WA next | Our new anthem