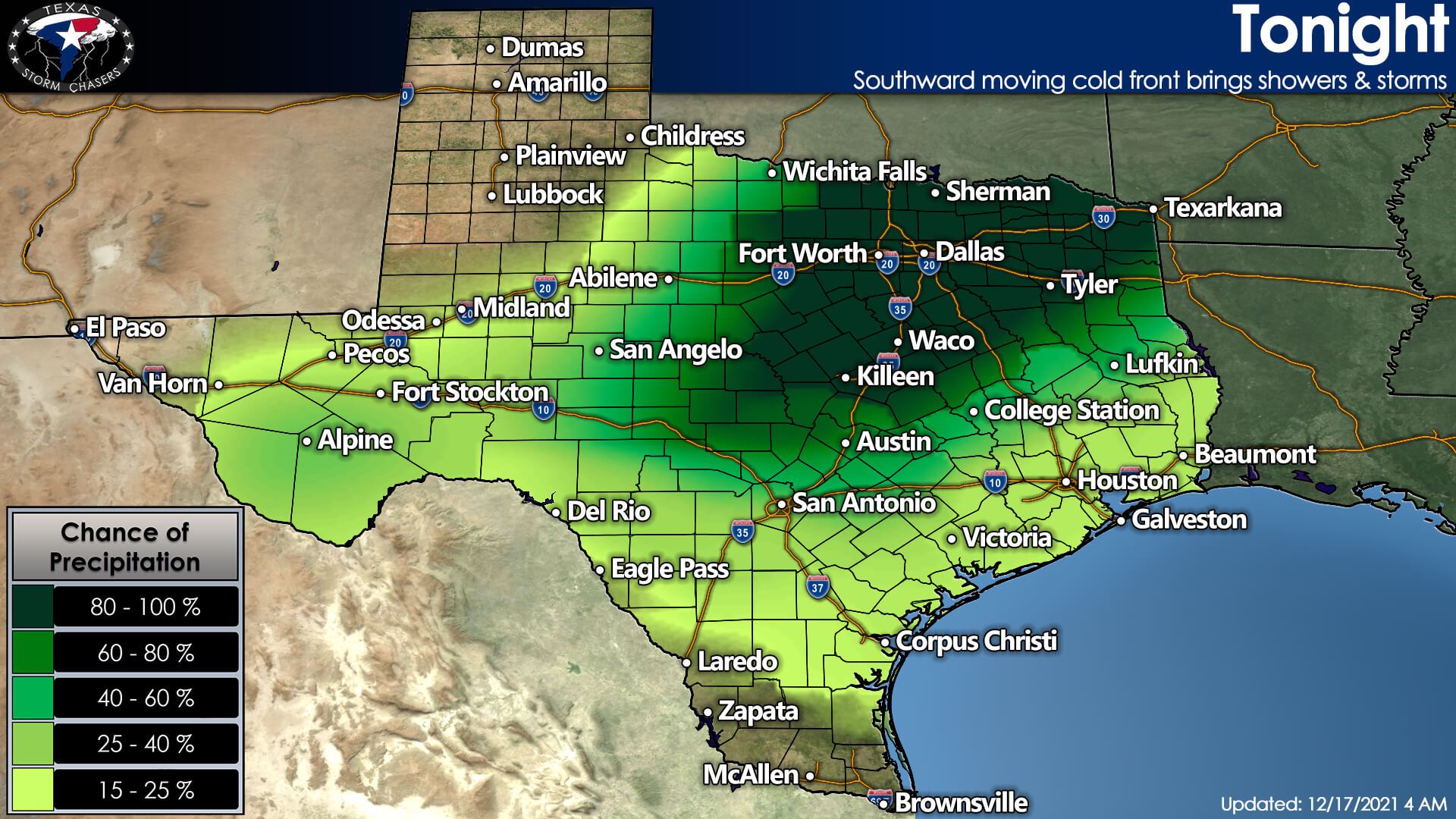 Welcome to the third to last Friday of 2021. We’re down to eight days before Christmas. I know it has not felt like December for most of Texas, and it won’t start feeling like ‘winter’ today. It will feel more ‘Decembery’ this weekend, but the interlude from spring-like weather will be brief.

A stationary front extends from the Concho Valley northeastward into southern North Texas and near Texarkana. Temperatures are in the 60s and 70s south of the front with a very humid airmass. Locally dense fog and low-level overcast are commonplace. North of the front, temperatures are comparatively lower, as is the moisture. A very dry airmass remains entrenched across the Texas panhandle, West Texas, and Northwest Texas. Today, the stationary front will become a warm front and make it north to around Vernon, Oklahoma City, and Tulsa early this evening. The front will come crashing back south late tonight and on Saturday as a strong cold front, or as I like to call it, crashy the cold front (since it blasts south, crashing through the warm sector).

As the front begins moving south tonight, there will be a high chance for showers and thunderstorms across Texoma, Northeast Texas, and North Texas. Rain chances will significantly increase after midnight and into the morning hours on Saturday. A few stronger storms may produce small hail and gusty winds. Still, the overall severe weather threat looks limited in Texas (though we’ll keep an eye on it throughout the day). Localized flooding is probable Saturday morning in urban areas of North Texas, Texoma, and Northeast Texas tomorrow morning. 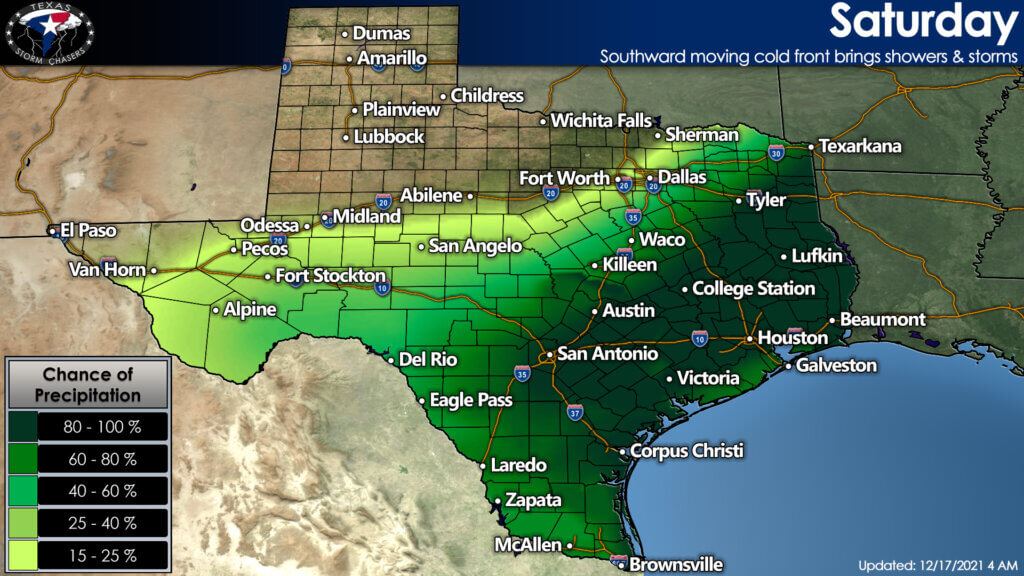 Widespread showers and thunderstorms will spread south in conjunction with the cold front on Saturday. If you live in the southern two-thirds of Texas, you’ve got at least a forty percent chance of rain tomorrow, with most folks having a good shot for rain. We’ll talk about specific timing below. A few storms in South-Central Texas, the Coastal Plains, and Southeast Texas may be strong late Saturday morning and Saturday afternoon. Some rain may be heavy at times, but widespread flooding is not anticipated. 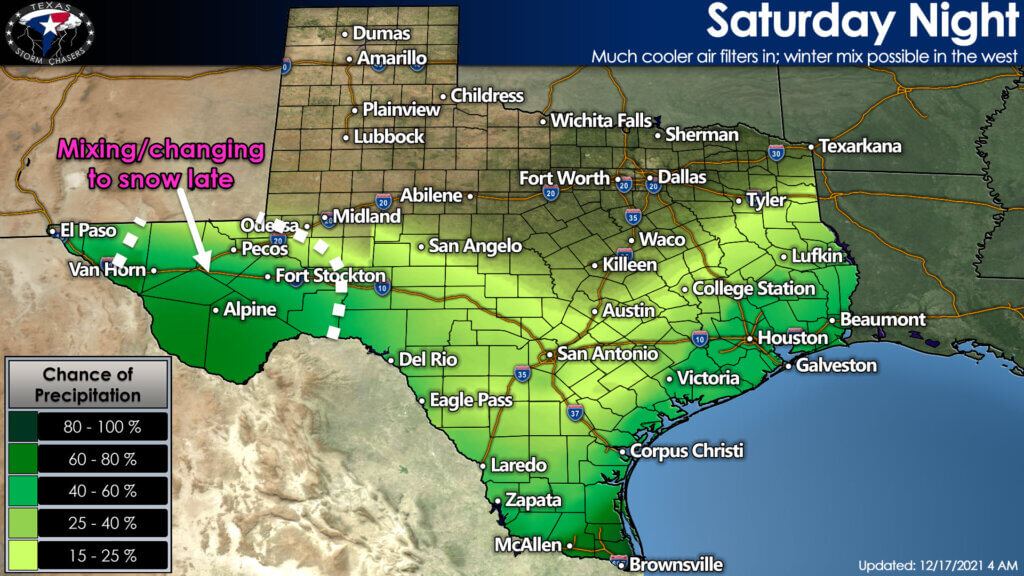 As crashy the cold front pushes deep into South Texas and off the Southeast Texas coast tomorrow evening, we’ll see rain chances conclude across the northern half of Texas. Showers will remain possible tomorrow night in Southeast Texas, the Coastal Plains, South Texas, the Rio Grande Valley, and the Edwards Plateau.

Things get a little more interesting Sunday morning across the higher terrain of Far West Texas and in the Guadalupe and Davis Mountains. A secondary wave of precipitation is likely to move northeast from Mexico into the regions mentioned above late Saturday night and into Sunday morning. With cold temperatures in place behind the cold front, it does appear we will see winter precipitation in the higher terrain (especially above 5,000 feet). 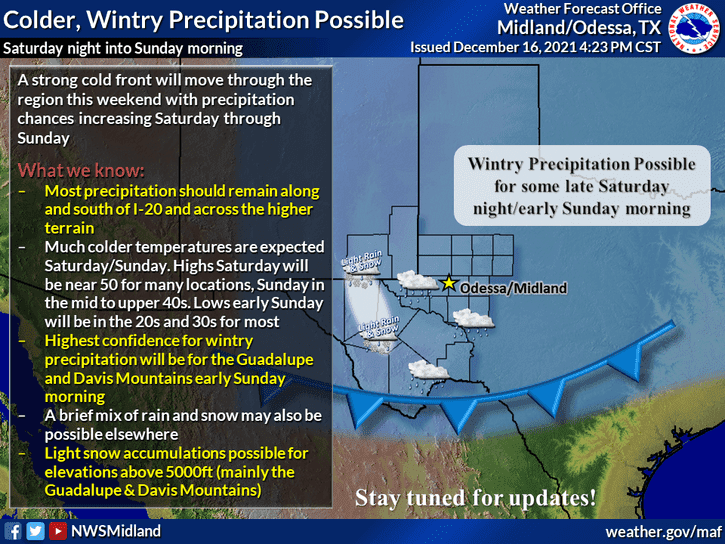 Minor snow accumulations (maybe one or two inches) can’t be ruled out in the higher terrain. Very warm ground temperatures will work hard to prevent snow from sticking around long, so we may not see more than a dusting. Across the lower elevations in the Trans-Pecos and Permian Basin, we could see enough cold air to support some snow flurries in conjunction with rain. Warmer temperatures and very warm soil temperatures should preclude accumulations.

We’ll keep an eye on tomorrow night’s setup and can refine any accumulation forecasts (if necessary) in later forecast updates. Even if we have minor snow accumulations, it will melt quickly due to the warm ground temperatures.

Rain ends Monday; Dry & Back to near Record Warmth leading up to Christmas 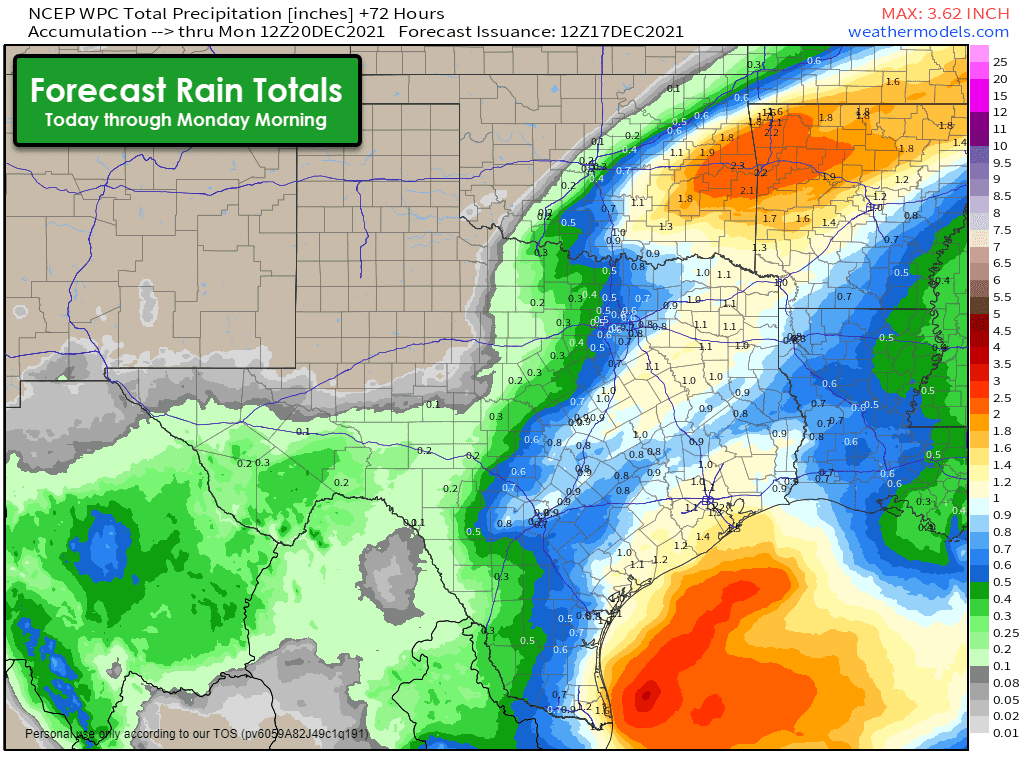 Rain chances Sunday afternoon through Monday will remain concentrated from the Hill Country south through South-Central Texas, the Coastal Plains, all the way down into the Rio Grande Valley and Deep South Texas. Precipitation chances will conclude by Monday evening across Texas. Dry weather is forecast from Monday evening through Wednesday of next week. Day-time high temperatures will be well above average for late December, with highs on Tuesday and Wednesday ranging from the middle 60s up into the upper 70s statewide. Wildfire danger will remain at least moderate across the western-third of Texas. However, we will have to watch for days and areas of locally higher risk.