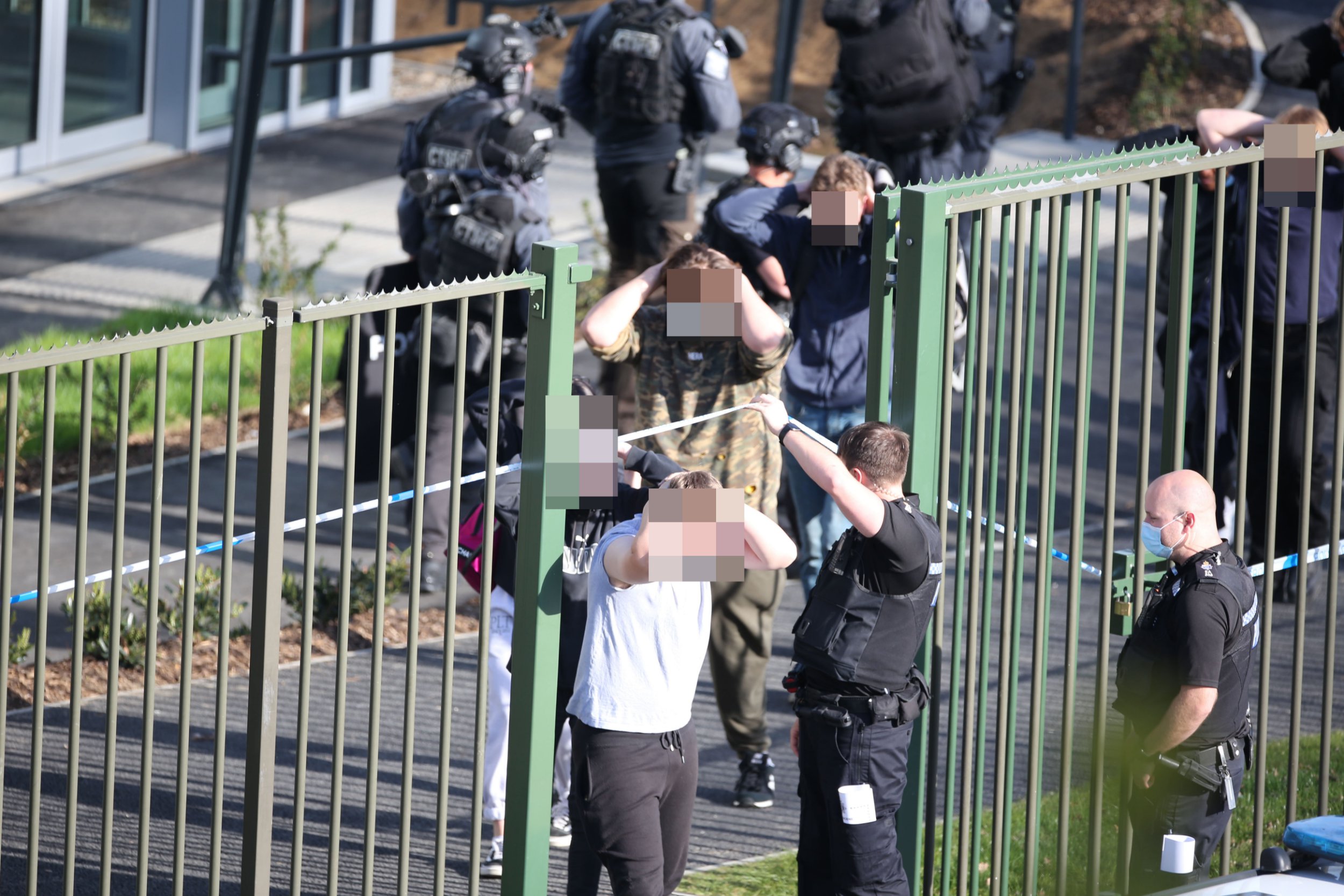 Traumatised students and teachers at a college where a gunman opened fire and told them to ‘run for your lives’ will receive counselling.

A hero teacher rugby tackled the masked suspect, pinning him to the ground as armed police, snipers and dog units descended on Crawley College in West Sussex yesterday.

The man reportedly entered the building ‘waving a black pistol around’ before attacking lecturers and opening fire on students who had no idea the bullets were blanks.

Two teachers are understood to have suffered minor knife wounds to their hands and wrists as they bravely defended the college.

An 18-year-old man from Crawley has been arrested and remains in custody.

In an update last night, Sussex Police confirmed the event is not being treated as a terrorist incident.

Eddie, 18, said: ‘It was absolutely terrifying. I heard shots ringing out and they were unmistakably gunshots. I saw the guy. He was wearing a black hoodie and a jumper and he had a mask on.

‘He was screaming at people telling them: “Run for your lives, run, run!” and jumping around all over the place then he fired some shots.

‘No-one knew they weren’t live bullets but they turned out to be blanks.

‘It was the scariest thing ever. Everyone thought it was a terrorist attack. I thought: “Oh my God. There’s going to be a massacre” and we all went back into the building for safety.’

The college is closed today as support is offered to students and staff caught up in the incident.

A spokesman said: ‘At just after 3pm yesterday, the police received reports of shots being fired on College Road, Crawley.

‘Police and armed police were swiftly on the scene and a man was detained with the help of staff from the College. A firearm and knife were seized at the scene.

‘Two members of our staff at Crawley College sustained minor injuries during the incident but these were not gunshot wounds.

‘Both members of staff have received treatment and will make a full recovery.

‘In the aftermath of the incident, students and staff were evacuated to a safe space whilst the police carried out a thorough search of the campus and buildings.’

The spokesman added: ‘We appreciate what a traumatic experience it must have been for all who were involved at Crawley in both the incident itself and the subsequent lockdown.

‘We would like to thank to everyone for their support and resilience during the course of yesterday afternoon and evening – including the Police and emergency services. We will be offering counselling services to our students and staff.’

Police chiefs praised the two members of staff who managed to detain the attacker.

Chief Superintendent Howard Hodges said: ‘We continue to have a policing presence in Crawley and are speaking to witnesses.

‘We are still appealing for anyone with information to come forward.

‘Two staff members at the college suffered minor injuries and presented themselves to a walk-in medical centre.

‘I want to thank those who helped apprehend the suspect before officers arrived and all the students, staff and public for their co-operation today.’