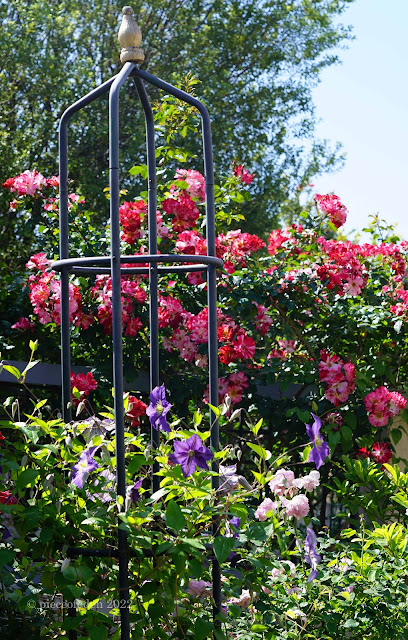 Stumping Along And The Holly Grail

The recently purchased Hakea, of all plants, was  scorched by our two days of near-100F (38C) heat.  Its tender new growth crisped . 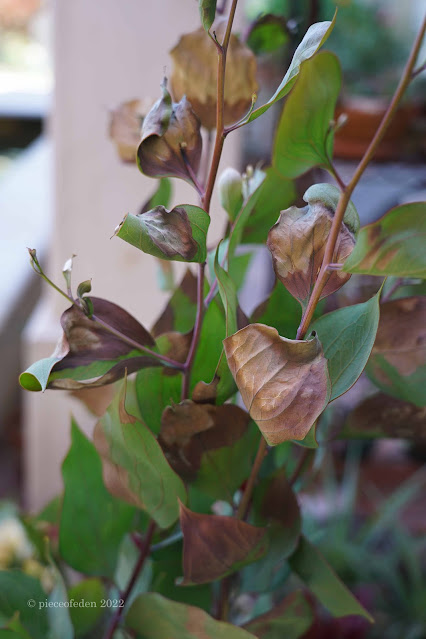 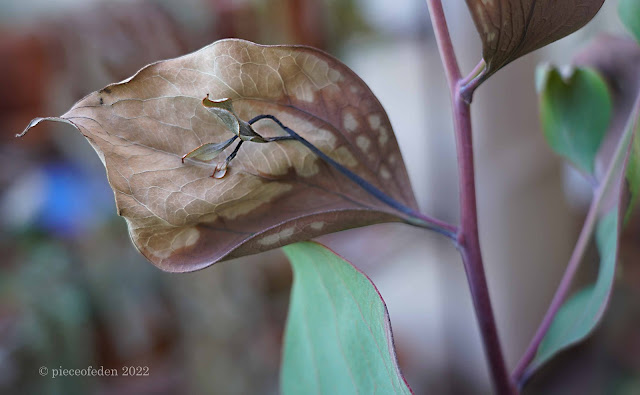 The rest of it seems okay. 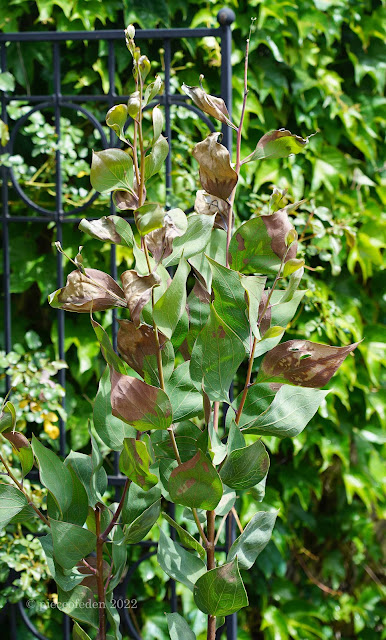 I'd set it and the Metrosideros 'Springfire' purchased at the same time temporarily in a bed where they could get irrigation and some afternoon shade.   It was insufficient to avoid damage.  In extremes of weather,  plants in pots are vulnerable.  The 'Springfire', unlike the Hakea was fine.

The Hakea damage increased motivation to get the last, largest Pitto stump out, so both new shrubs could get into the ground.  Several digging sessions and switching from shovel to shovel plus pick got the third Pittosporum stump out at last.

Harder than it looked: 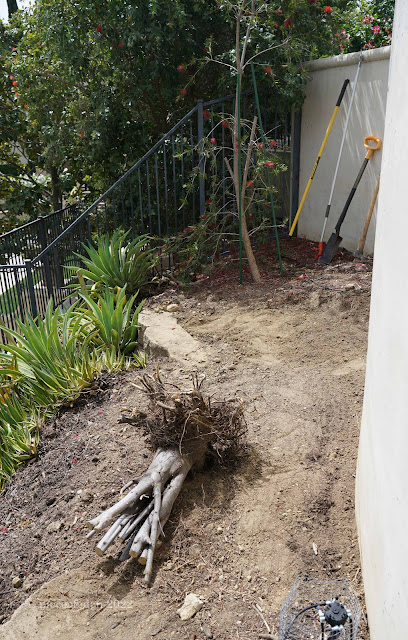 It is now unfortunately obvious that to create a uniform screen of the neighbor's roof, the Callistemon needs to come out as well. 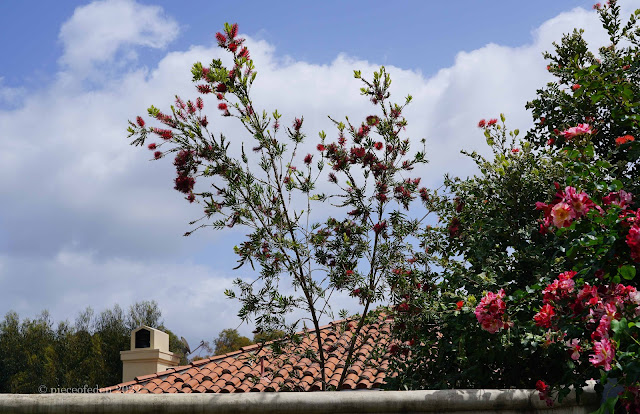 In measuring the width of the two oldest 'Springfire's in the garden, it appears planting them about 9 or 10 feet apart will give effective screening of the neighbor's roof.  The Callistemon needs staking and trimming, not what I want to do in that location.  Having been recently planted--2 years or so?--means it might survive a move.   Experience has shown  Callistemons are super --tough.  So, I'll try.  Back to the shove of the shovel, the swing of the pick, the aches.

Besides that, the two masses of ever-offsetting Agaves on the slope must come out as well.  Out of control.   I have several ideas for replacement plants.

The area's plants need to do two things:  screen out the neighbor's roof (but not the scenic trees, hills, sunrises and moon rises above and beyond) and hold the quite steep slope.  The LA in the initial planting used Alnus rhombifolia and a native Ribes.  The too-big Alders were a terrible choice.  The Ribes did not thrive.

Dodonea viscosa 'Purpurea's replaced the Alders.  We  hoped the Ribes yet would improve.  They did not.  The Dodoneas worked--briefly until they started falling over or dying.  I pulled everything out at that point and planted offsetting Agaves, and Aeoniums, and as the roof screen, tried two 'Swanes Golden' Italian Cypress (too big, rat habitat) and five Pittosporums tenuifolium selections, one of which has been an effective screen.  The others could not handle heat and drought.  This latest attempt is a Metrosideros (proven very good elsewhere in the garden), a Hakea, a Leucadendron 'Chief', the sole surviving Pittosporum, a Magnolia laevifolia and an Arctostaphylos 'Austin Griffiths'.

This is the sausage making of gardening.  An unpleasant process you don't want to know about hopefully creating a successful outcome.  Trial and error, until--success.  Here's hoping.

A different stump:  the third Italian Cypress stump.  The first two have made excellent Bromeliad supports.  The third was in place, but the place seems too sunny.  I moved it to the location where the old Begonia was declining, next to one of the two other Cypress stumps and loaded it up with Tillys, an Orchid, and a small Platycerium.  A tuft of Hakonechloa grass moved in front of it will grow.  It's a start: 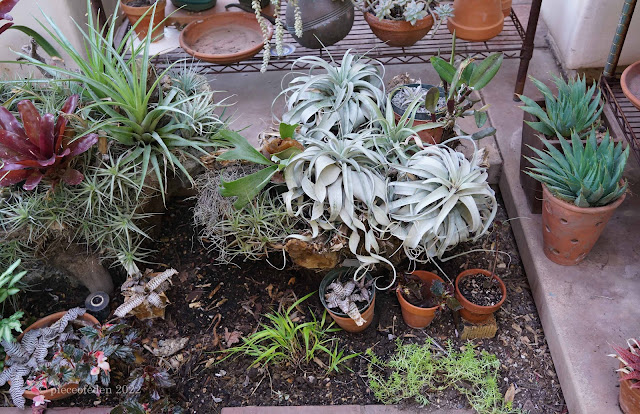 Other activities:  Reading yet again that Erigeron 'WR' is a great plant, I moved what was left of mine to a sunnier spot six or eight weeks ago.  It had been languishing in too much shade for too long.  New growth at the base has appeared.  Perhaps it will finally produce a flower. 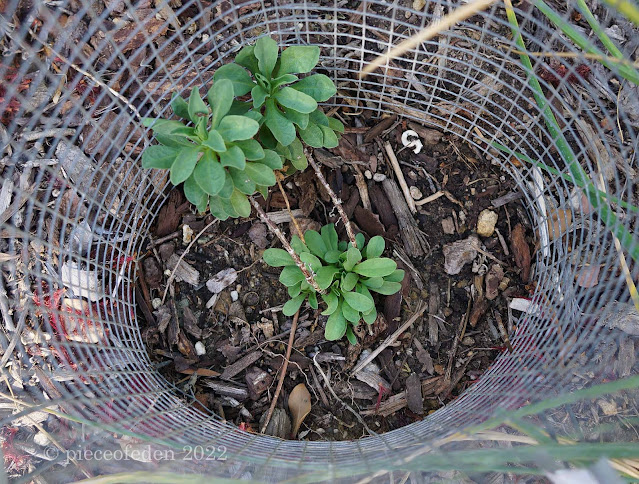 All the new Dahlia tubers are planted and most all are sprouting, some in the ground, some in pots to be planted in the ground after the onions are harvested, or where ever a spot requires some summer dazzle. 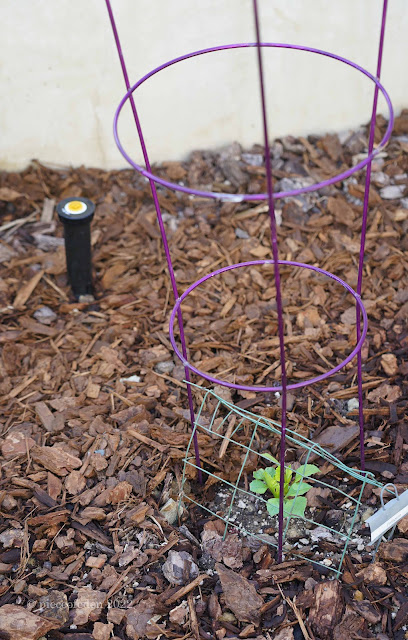 New sprinklers in this area for some of the Dahlias.  The free drip tubing and connectors courtesy of our for-profit water company broke quickly, as if they didn't really want you to save water, but just wanted to look as though they did.

Three trailing pelargoniums (CNA "ivy geraniums") for the "woolly pocket".  I'm trying them on this gate which gets shade from about 11am to 1pm, and then from 3pm to sunset, times when the sun is most oppressive.  It would be nice if they like it here. Another new purchase, a second 'Easy Spirit' rose.  It called to me and I answered.  Also a couple of dwarf Felicia amelloides 'Pinwheel Periwinkle'.  The Felicia grows to about 12" wide--much smaller than the species. 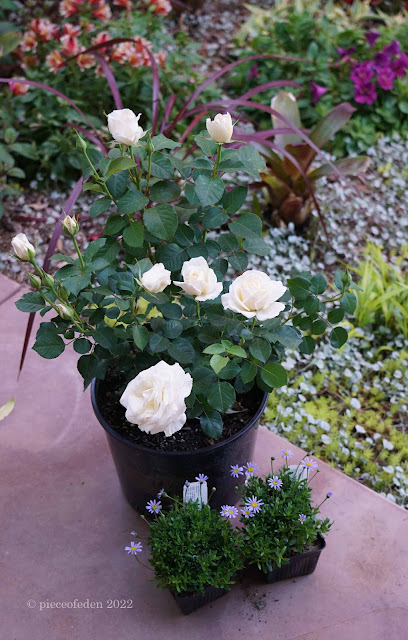 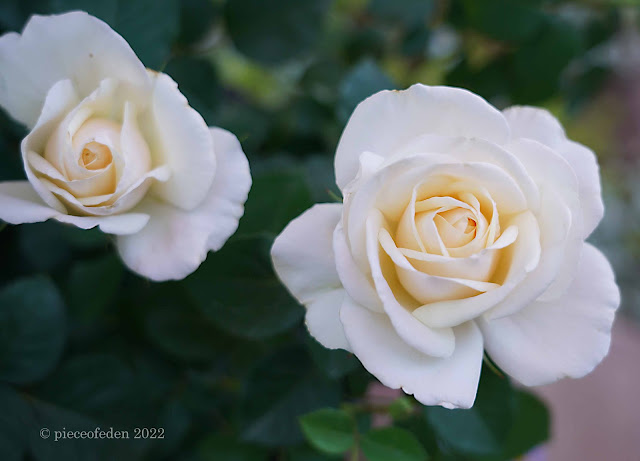 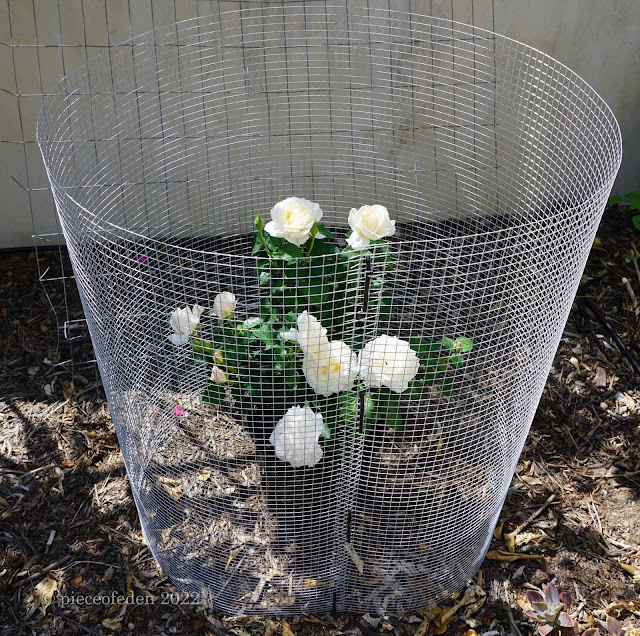 And something I've been thinking about a while:  another Avocado tree.  There's an empty place up on the west slope where I removed a failed orange tree.  The local heavy-on-edibles nursery that orders from suppliers to commercial orchards announced they'd just received a delivery of liners, so a 'Don Gillogy' came home with us. 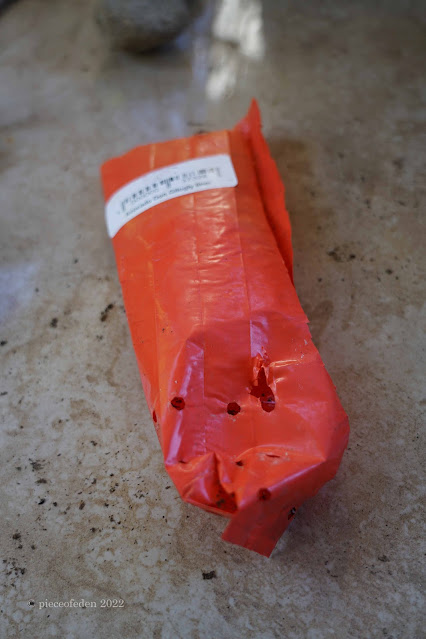 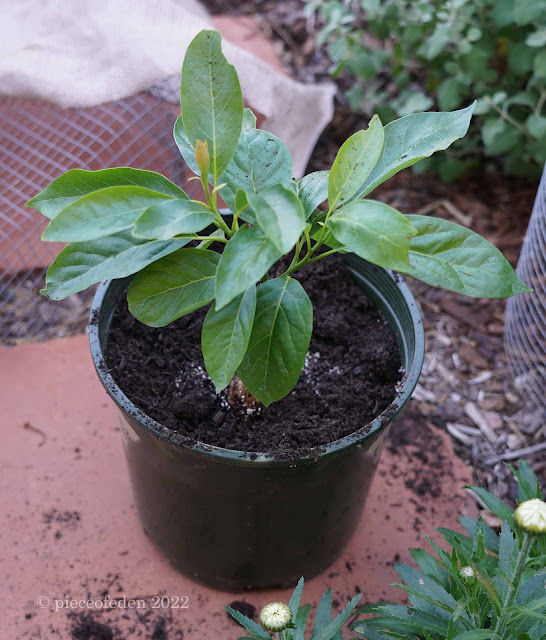 The graft is under the tape. 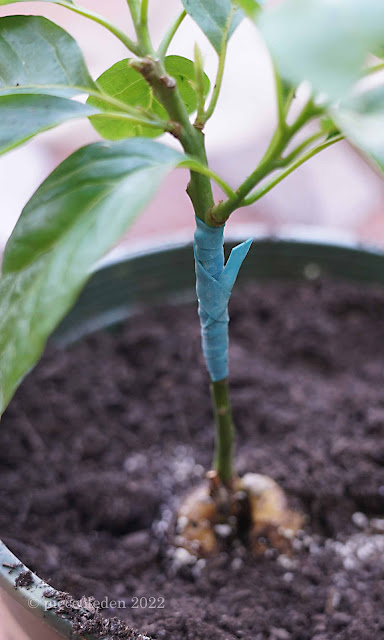 Grafted on to a sprouted avocado pit??? 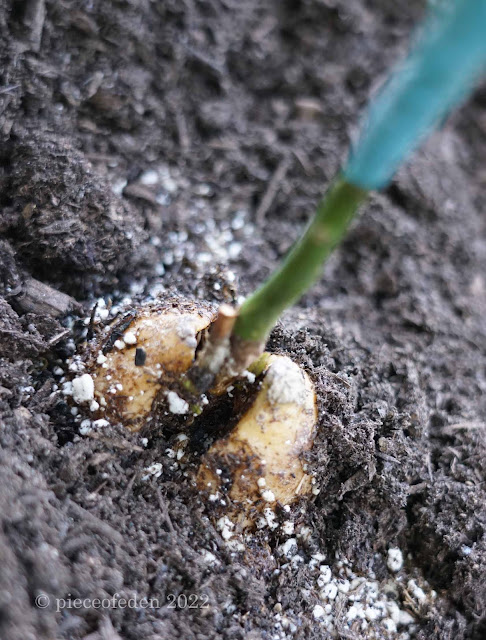 Instructions were to grow it in a five gallon container until October and then plant it in the ground.  The nurseryman said it was by far the most flavorful variety to be had.  This variety was much hyped when it was introduced a few years ago.   I've had enough avocado growing experience to cage the little tree from rabbits and drape some shade cloth over it.  No strong hot sun until it grows. 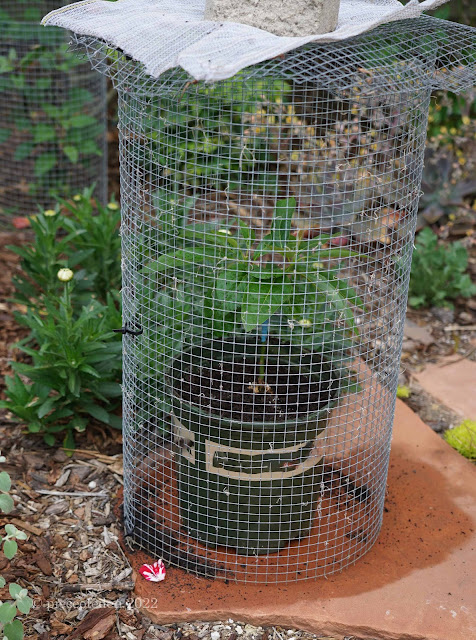 I started searching for Alstroemeria 'Indian Summer' three years ago when it was one of the "It" plants of 2019 and could never find one.  Sold out, sold out. Finally got mine: 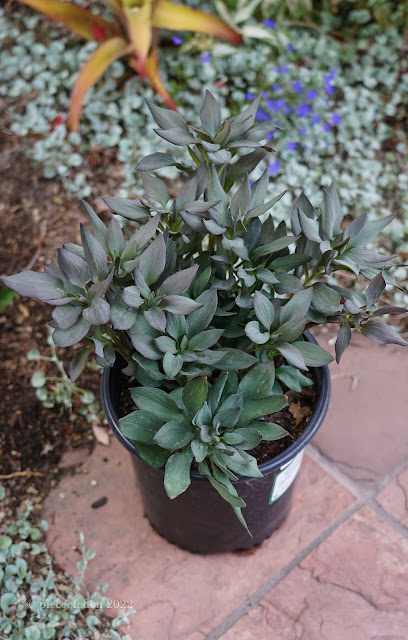 The San Marcos Growers website, indispensable for California gardeners, consistently restrained and realistic in its plant descriptions, calls 'Indian Summer' "the Holly Grail of Alstroemerias".  (Assumed they meant "holy". )  They "thought it so sensational that we had to track it down."   Okay then: tracked.

Stumping Along And The Holly Grail