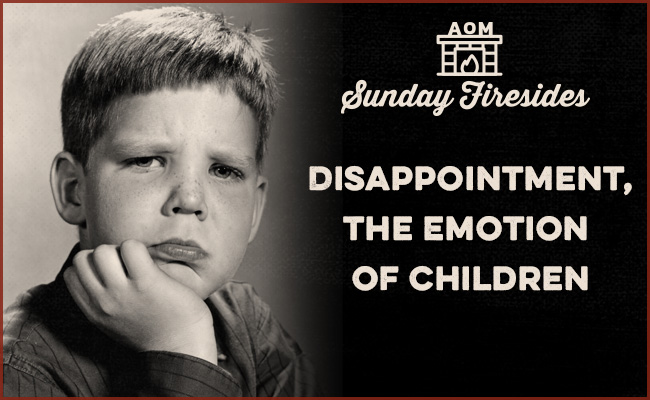 Disappointment results from a violation of expectations.

Disappointment happens to everyone, sometimes justifiably. But the more unrealistic, overweening, and inflexible — the more childlike — someone’s expectations are, the more often and intensely they’ll experience this form of unhappiness.

A child expects to win every contest, and is devastated by a loss; a grown man retains high hopes, but knows worthy efforts may go unrewarded.

A child expects everything to go according to plan, and descends into passive pouting when preconceptions collapse; a grown man has the capacity to make the most of changed circumstances.

A child expects his heroes to be perfect, and writes them off when he discovers their flaws; a grown man can be inspired by someone’s strengths, in spite of their weaknesses.

The immature is disappointed when someone else isn’t at the same point of personal progress; the mature knows everyone (including himself) embodies aspects of character which are more and less developed.

The immature are disappointed when a public figure/media outlet/institution releases a bit of humor/content/art that is not to their liking; the mature do not mistake their subjective taste for objective truth, realizing their most detested pan, might be someone else’s favorite pick.

The immature are likewise disappointed when some figure/outlet/institution offers an opinion with which they disagree; the mature recognize that no entity will ever 100% align with their own views (and that such alignment wouldn’t even be desirable).

A child thinks the world revolves around him; an adult concentrates on turning on his own axis.

The immature expects others to meet his needs; the mature is prepared to meet them himself.

When one adult tells another, “I’m disappointed in you,” he assumes the stance of a parent speaking to a child; yet, ironically, it is often he who really needs to grow up.

The post Sunday Firesides: Disappointment, The Emotion of Children appeared first on The Art of Manliness.