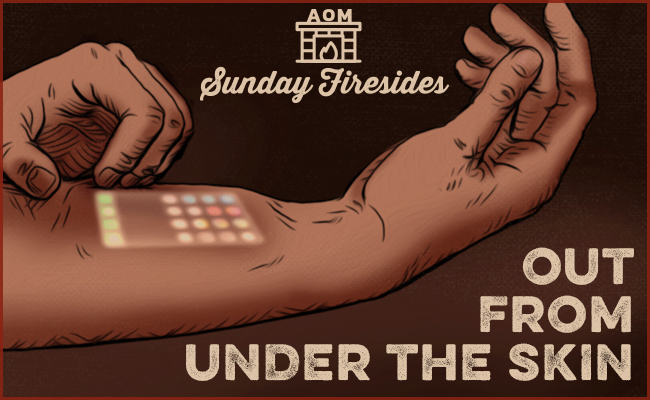 Sunday Firesides: Out From Under the Skin

When smartphones first started taking off, which, strange to recall given their current ubiquity, was only a decade and a half ago, the subsequent years were filled with a fair amount of concern and contemplation as to how these devices were affecting our minds, behaviors, relationships, and culture.

Many a thought piece, and a bestselling thought book, questioned the place of this new tech in our lives. Blogs turned out thousands of articles with recommendations for managing the increasingly distracting pull of digital devices.

But over the last couple years, this kind of talk has grown significantly quieter.

Optimistically, this is because we’ve gotten so well-practiced with our phones that we’ve mastered having a healthy relationship with them.

More pessimistically, and realistically, we’ve stopped worrying about our technology, because we have, at last, wholly surrendered to it.

Those born in the 1990s have never lived in a world without internet. Those born prior, who experienced the transition from a pre- to post-digitized world firsthand, have now been using tech so regularly, they’ve largely forgotten what the contours of the former landscape felt like.

With nearly 100% of Americans owning some kind of cellphone, there are no emissaries who might disturb our acceptance of their constant companionship with stories carried from an exotic, unconnected land.

What was once a splinter, a felt foreign object that yet caused a bit of irritation, has been covered over with tissue. Fused with us.

Recovering the echoes, if not from personal then primordial memory, of another kind of life, will require dusting off those quaint recommendations from the 2010s; doing those things — blocking apps; fasting from social media; taking a weekly “tech sabbath” — that create a little distance . . . that get our devices out from under our skin, and back to at least arm’s length.

The post Sunday Firesides: Out From Under the Skin appeared first on The Art of Manliness.

Sunday Firesides: Out From Under the Skin