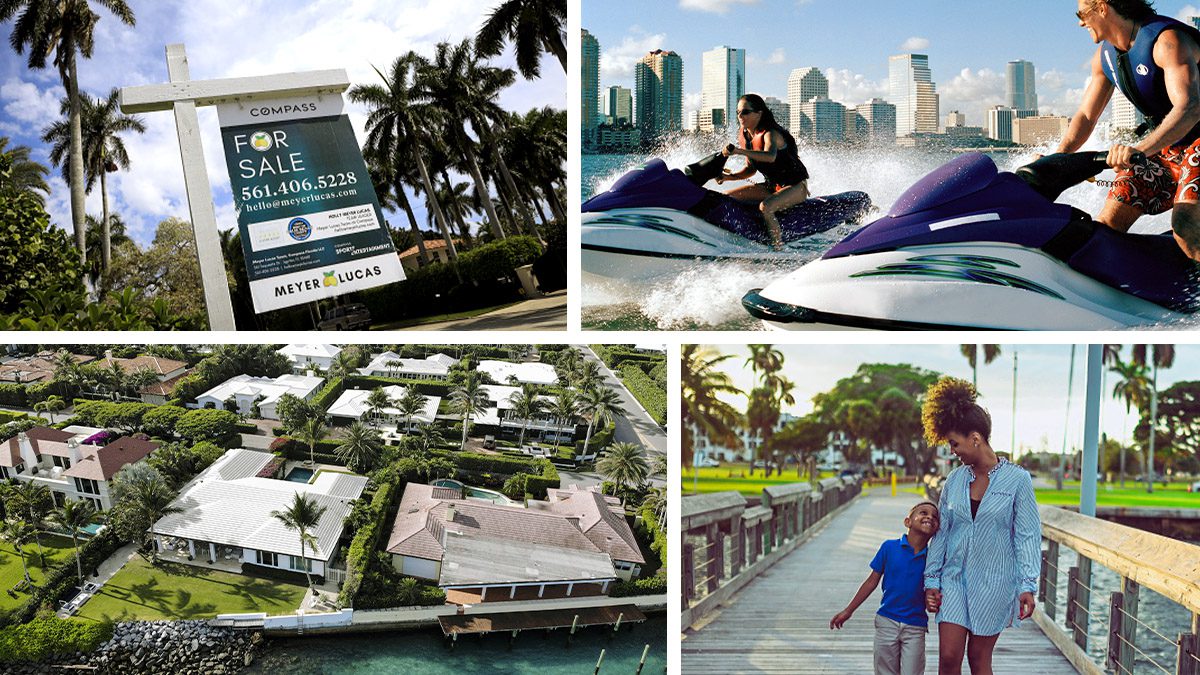 Sunshine State Scramble: Why Is Everyone Moving to Florida?

It’s not just Grandma who’s moving to Florida these days.

People from all over the world are looking to buy a piece of property in the Sunshine State. In just the past year alone, Florida’s gained more than 200,000 residents, according to the latest census data, second only to Texas in population growth.

But as home prices increase by double digits across the state, rents skyrocket, and the bidding wars that flared up over summer 2021 continue to escalate, the Realtor.com® data team wanted to take a closer look at the metrics to see what’s really going on in the southernmost U.S. state.

Simply put, everyone is hot for Florida.

Florida has always been an attractive place to live with its warm weather, gorgeous beaches, no income tax, and relatively affordable home prices. It has, of course, long been a mecca for retirees: More than 3.5 million baby boomers have retired in recent years, and a good chunk of them are spending their golden years in a temperate paradise. But now, it’s becoming an increasingly popular destination for younger residents, too. More and more millennials who can work remotely are deciding to do so by the beach.

Meanwhile, conservative-leaning folks are deciding to leave liberal enclaves in California and New York for this red state in search of less restrictive COVID-19 measures and like-minded political views. Throw in some Wall Street investors looking to turn single-family homes into rentals, and you’ve got a perfect storm of increased demand with not enough homes to go around.

“The limited inventory is definitely driving the prices up,” says Lynn Charlas White, a broker associate at Coldwell Banker in Naples, FL, located on the Gulf Coast. “People are paying mind-boggling numbers, and it has no sense of slowing down.”

Like the rest of the country, the number of homes for sale had been shrinking in Florida for a while. But starting in the spring of last year, the available inventory fell even more than in the rest of the country. So far this year, there are half as many homes for sale as there was the same period a year ago, as more people are moving to Florida than are moving out of the state.

“We’re seeing this ‘great reshuffle’ around the country, but the thing is that people in Florida are generally not leaving Florida,” says Kristine Smale, a senior vice president at building consultancy Zonda. Floridians who are moving are simply relocating to other parts of the state.

And while homebuilders are trying to keep up, they’re experiencing the same supply chain issues that are plaguing the rest of the country. Builders there are having to wait weeks for necessary items like doors, trusses, and large appliances.

“Even if it’s a week of delay time on each thing, it stacks up over time and that creates a compound effect,” says Mike Lombardo, a broker with Old Glory Realty in Cape Coral, FL.

One of Florida’s biggest draws is its cheap real estate compared with other parts of the country. However, its affordability is starting to fade.

As people fled the Northeast and Midwest throughout the pandemic, many came with cash. After selling their homes in expensive markets like the New York City suburbs and Chicago, folks found their money could go much further in Florida. And to stand out, buyers are offering six figures over the asking price in some cases.

Lifelong Floridians who have been priced out of expensive markets can now commute from more affordable metros, especially if they have to go into the office only once or twice a week. One example: More than 10% of people looking for homes in the Sarasota metro area were coming from Tampa at the end of last year, according to the latest Cross Market Demand report from Realtor.com.

“Sarasota is benefiting from the job growth from Tampa because it’s an easy commute, and some of the schools are better,” Zonda’s Smale says. “It’s an affordability issue as well.”

Renters aren’t having much luck either.

Out of the five metros with the largest rent increases in January, four were in Florida. The worst offender was Miami, where rents grew by more than 50% compared with the same time a year ago. The median rent there is now $2,895 per month.

The post Sunshine State Scramble: Why Is Everyone Moving to Florida? appeared first on Real Estate News & Insights | realtor.com®.

Sunshine State Scramble: Why Is Everyone Moving to Florida?