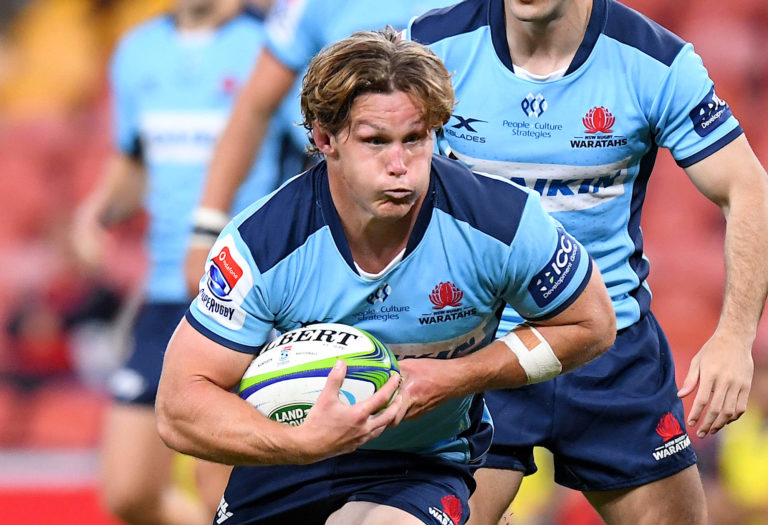 Super Rugby Radar: Only way is up as Hooper and Coleman have Tahs fans frothing

There’s a piece of readily accepted group think that when New South Wales cricket is strong, Australian cricket is strong. And when Pat Cummins, Josh Hazlewood, Mitchell Starc, Steve Smith, David Warner and Nathan “Gary” Lyon are major players in the nation’s Test XI, you can perhaps make a case.

It’s not precisely the same for NSW’s effect on Australian rugby. Though it is, a bit.
And while it … well, it shits the four other state-province-franchises that the success or otherwise of NSW Waratahs is conflated with the health of ‘rugby’ in Australia, as Paul Keating once said of Sydney – “Anywhere else you’re just camping out.”

Just how it is: NSW is the most populace state and the local team will glean the most publicity, for good and ill.

And thus for many fans – looking particularly at you, half-interested, bandwagon-hopping, largely AFL and league types – the health of ‘rugby’ in Australia is directly related to the health of NSW Waratahs.

Which means one thing: rugby was a sick puppy in 2021. For half of it, anyway. Rugby was borderline flat-line. Rugby was nailed to the perch like that old ex-parrot. And it only got better when the Waratahs stopped playing.

For then ‘rugby’ became the Wallabies. And, after the ritual pantsing by the All Blacks, ‘rugby’ beat France, South Africa, Argentina and Japan, and in some style, before limping in and out of the UK three-and-oh.

There were reasons. And pundits in media e-pages such is this crackerjack journal have mused upon them, picking at the Giteau Law like forensic coroners poring over entrails and asking what it can all possibly mean with just 596 days until the 2023 Rugby World Cup in France.

For now, though, in dear sweet dewy virginal brimming-with-promise 2022, we’ll assume that, for the Waratahs, the only way is up.

Because surely that’s true. Because last year they lost to everybody.

That’s right: everybody. And they were royally, viscerally flogged. They weren’t so much last on the Super Rugby ladder as tied to a post and flayed with so many spoons.

Queensland beat them 41-7. The Brumbies beat them 61-10. In five fixtures against Kiwi provinces NSW let in an average 53 points per game.

Fifty-three points! They didn’t let that many into West Berlin. Again, there were reasons.
For one, injuries meant a very ‘Gen Blue’ look to the baby sky blues.

And two, it seemed everyone else was in Japan.

Michael Hooper – an important man – in Japan. Jed Holloway: Japan. Ned Hanigan was in Japan, turning out for the sexy entendre Kurita Water Gush. Exotically-named Rahboni Warren-Vosayaco was playing in the centres or No.8 – he’s a big fellow, he plays wherever he wants – for Munakata Sanix Blues.

And yet, here in dewy brimming, all that, 2022, there are green shoots at Daceyville.

Let us count the ways.

Tevita Funa has come from Manly Warringah Sea Eagles (where he was 2020 Rookie of the Year).
And 31-year-old Ruan Smith comes back from LA Giltinis to beef up the front row stocks and become that rarest of birds, a five Australian state-province-franchise representative.

But it’s the coach who’s the new guy. Darren Coleman has won grand finals with Warringah Rats and Gordon Highlanders. His LA Giltinis were the best team in Major League Rugby. He’s coached in Canada, Italy, Japan and Penrith. And wherever he goes he sprinkles that ‘DC gold dust’ and makes players love him. And he loves them back. He cries. Everyone cries. And those in Sydney club rugby land are just about frothing with joy that he’s coaching the state. Because he’s one of them: A rugby man. It matters.

But – and it’s very big but – Coleman is in pro ball now, what baseball players call ‘the bigs’. He won’t have faced scrutiny or performance pressure like this. Even in LA, Coleman was coaching semi-pro players, and beholden mainly to a rich dude and a board.

But now, in hoary old Sydney town, Coleman is the coach of ‘rugby’. He’s responsible for ‘rugby’.
One of the great blokes. Let’s hope it doesn’t kill him.

Star on the rise
Max Douglas, 22, went straight from Colts to best and fairest in first grade at Shute Shield the Manly Marlins, and ended 2020 playing for Australia “A” against Argentina.

A long and strong lock with shades of Matt Cockbain, Douglas plays like a No.6 in that on top of a decent lineout leap he can run and pass and backup to score tries. And he belts blokes. Now, not saying he’s Victor Matfield reincarnate – he’s 6 foot 7 and 105kg, and does appear to need a bit more meat on his bones. But the son of Manly Marlins legend Cam Douglas has, as they say, game. And they should feed the man meat, as they also say or once said.

Who’s under the pump

If the Waratahs are to compete with, much less beat, the best provincial rugby teams in our fine hemisphere, they must perfectly execute so-called ‘simple’ things. And one of those things is throwing the ball into the lineout at the right time and to the right place.

And that is on David Porecki and Tom Horton. Good as Tatafu Polota-Nau and Tola Latu were around the field, if there was a knock on them it was lineout throwing. A hooker will throw the ball in 10-15 times a game. They must be better than 90 per cent. Preferably 100 per cent. And yes, lost ball on one’s own throw is on the whole lineout. But the hooker owns it.

Five-eighth Will Harrison will also be under scrutiny.

Best-case scenario
Win more than they lose. The squad’s been beefed up, certainly. Put M. Hooper into any rugby game and the Energiser Bunny will burn them all. Hanigan adds punch at lock or back-row (though will only be back from Japan some time after round 7 in April), as does the rugged Holloway. With Lachie Swinton and Warren-Vosayaco there’s plenty of meat in the backrow.

Love also the centres. And want to see Tevita Funa and Mark Nawaqanitawase in space with ball in hand.

But 2022 – see above re: green shoots – still appears at best a development year for the Tahs.

Super Rugby Radar: Only way is up as Hooper and Coleman have Tahs fans frothing