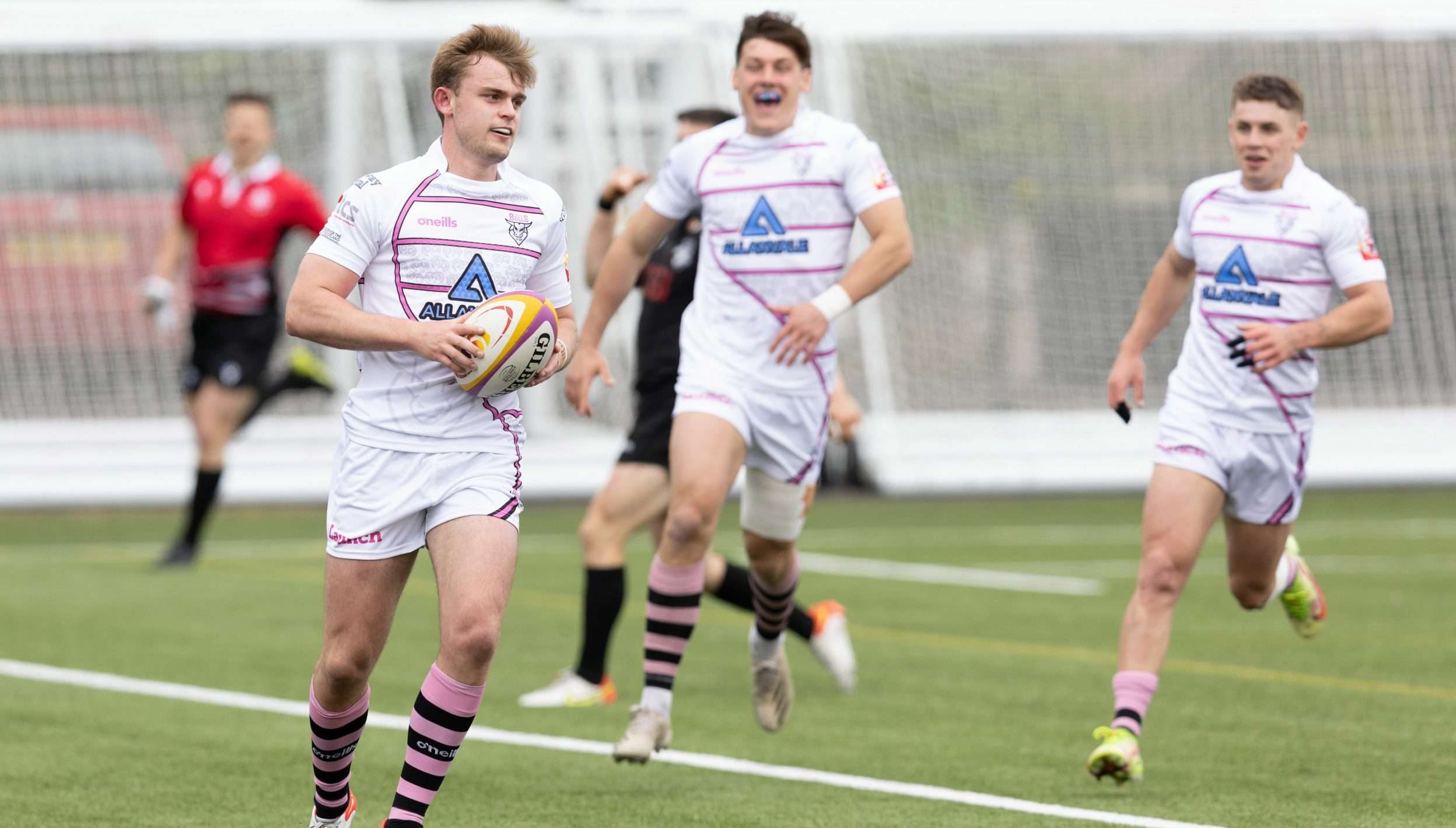 SOUTHERN KNIGHTS suffered their heaviest defeat of the Super6 Sprint series in conceding ten tries to a rampant Ayrshire Bulls side that in comparison to the lightweight home forward pack, exuded a muscularity that quickly made the outcome of the game all too predictable.
“No-one wants to make excuses but nevertheless there were a good few boys not playing today for the Knights. They were lightweight up front and Ayr played well. They were very physical. But we move on now and see what happens in the next two weeks” suggested Rob Moffat, the Director of Rugby at The Greenyards.
In what very quickly became a mismatch, Ayrshire Bulls used their muscularity to bully the Knights at the set-piece, providing choice possession for their backline to demonstrate at times, a finesse in attacking rugby, notably at centre where last season’s stand-out player Tom Jordan again produced a polished performance.
Another back to excel was replacement scrum half Cameron Jones, a Scotland under-20 cap, whose ability to break created space for his outside backs.
Bulls’ coach, Pete Horne, spoke afterwards about his side demonstrating how they could improve after being run close by Heriot’s in their 17-14 win over the Goldenacre men in the last round. He said: “In terms of our physicality against Heriot’s we talked about taking it up several notches. We really took the game to Knights. We were aggressive and brilliant in defence. We just completely outworked them with a performance built on the back of hard work.”
A potential Bulls stampede was evident in the first few minutes of the game when the Knights’ set scrum was put under huge pressure resulting in the home forwards pack being forced to engage reverse gear.
Moreover the Bulls were looking beefy in the tackle and clearly intent on allowing any breakthrough from the Knights’ attack. But it was the line-out drive and maul that produced the first points, a try by flanker Ryan Sweeney to which Christian Townsend added the conversion.
Townsend then showed his running skills by swerving through a disorganised Knights defence for his side’s second try – and conversion. Next in the queue was Tom Jordan, who brushed off several tackles to grab the Bulls’ third touchdown, this time unconverted.
Fortunately for the game Knights had something to offer as demonstrated by Nathan Chamberlain, who sliced past several Ayrshire defenders before setting up a try for youngster Sam Derrick and then adding the extra points.
But that was to be Knights’ only points in the first half as the Bulls resumed scoring mode through Jordan after non-stop pressure from the visitors’ forwards and then quick hands from Townsend, who added the conversion,
Then in a final flurry before half time hooker Alex McGuire finished off a line-out maul before former Marr wing Jamie Sheddon powered over in the corner, Townsend’s conversion giving his side a 38-7 interval advantage.
The second half was not any easier for the Knights,  who could not stop Aaron Tait skipping over the line after a Cameron Jones break, nor Sheddon racing in for his second. Townsend converted the first of this early second half duo of scores before being replaced by Matt Minogue whose first duty was to converted a second try by Tait following a break by Liam McNamara.
The Bulls were reduced to 14  when replacement prop Andrew Nimmo was yellow- carded and immediately the Knights took advantage with a sprint down the left flank by replacement Aidan Cross whose inside pass found fellow replacement Finn Campbell in space for the hosts’ second try of the match.
But any thoughts of a revival were quickly scotched when Sheddon completed his hat-trick to confirm that the big winger means business at this  level of rugby.

Scotland A versus Chile match confirmed

Scotland A versus Chile match confirmed