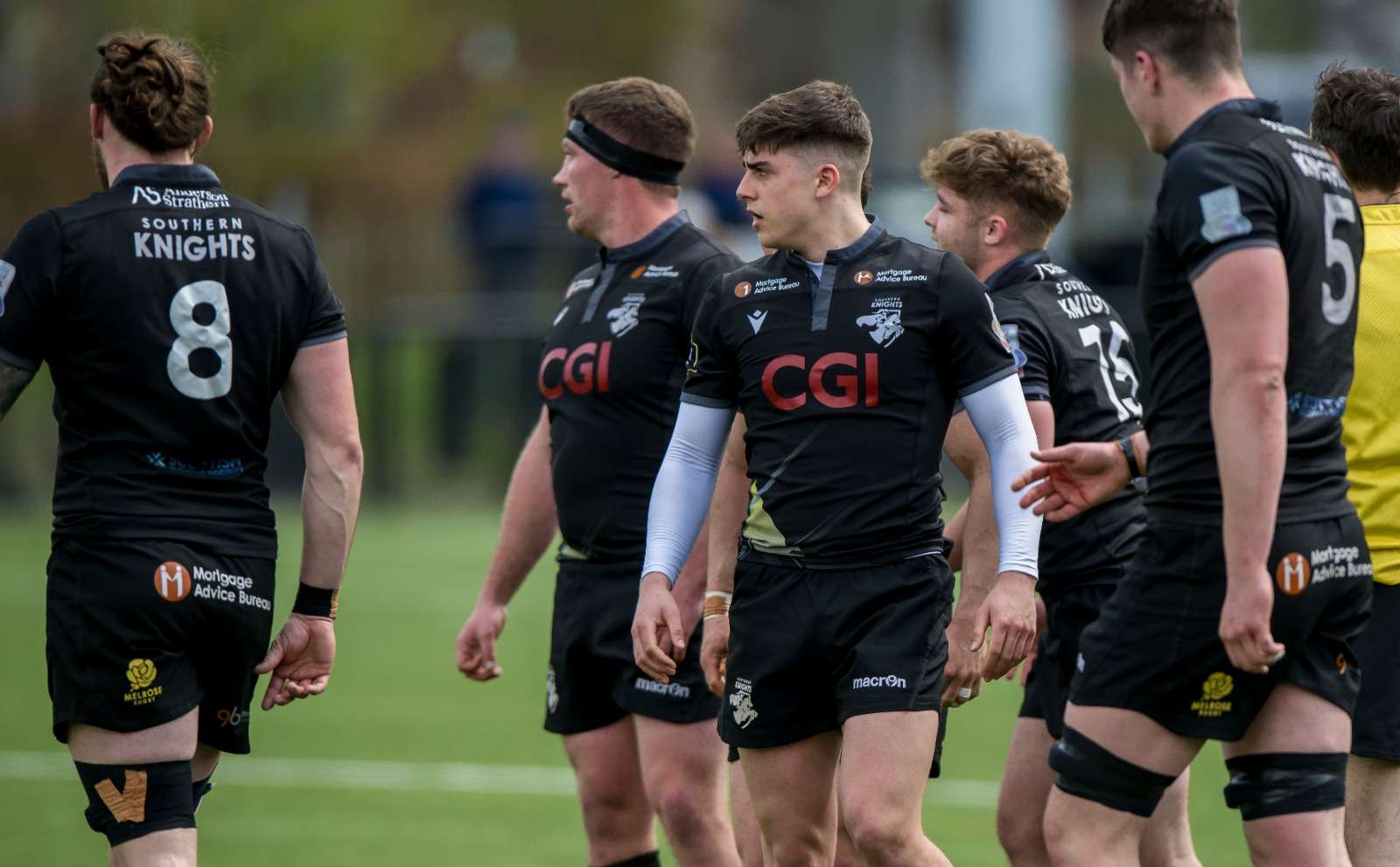 THESE are tough times for the Southern Knights Super6 franchise, with last weekend’s 62-12 demolition at the hands of Ayrshire Bulls bringing into sharp focus the vulnerability of a young squad which lost nine key players to other franchises during the winter break, plus over half dozen more who either retired or returned to the club game.

It was their fourth defeat on the bounce since this Super6 Sprint series kicked off last month, but Rob Moffat – the former Edinburgh and Melrose head coach who has shared the Director of Rugby role at The Greenyards with Colin Meager since the summer of 2020 – insists that he has a ‘glass-half-full’ view of the team’s current predicament.

He doesn’t pretend that everything in the garden is at full bloom. Finance is bound to be a concern after Covid put paid to two money-spinning Sevens tournaments, and much work needs to be done to foster support for [or at least reduce opposition to] the Knights concept both in Melrose and among the wider Borders rugby community, but the ever-optimistic Moffat believes that the tide can be turned.

“It is interesting times … and that was a tough one to take,” Moffat acknowledges, with brilliant understatement, when asked to reflect on last Saturday’s defeat. “We did lose a few players [during the winter break] and the squad is probably younger than we want it to be, but the way we’re looking at it is that we are here to develop players. While nobody wants so see results like that because it doesn’t help anybody, we’ve got belief that these young guys can learn from their experiences and come back stronger.

“It sounds like an excuse, but there was a lot of boys not involved against the Bulls – we had about a dozen players out – so we were really lightweight and young,” he adds. “In the three weeks before that, we didn’t win but there wasn’t much in it. So, I think circumstances were against us, and that could happen again because we don’t have the experience there that we could call upon last season, which means if we lose two or three of our senior guys then it gets very difficult fairly quickly.

“I’ll also point out that we came up against a good Ayrshire Bulls side who played very well on the day. We have to take our medicine and come back stronger against Boroughmuir Bears next weekend – although there are no easy games in this league.”

With injuries, suspensions and other unavailabilities accounting for second-rows Dan Suddon and Dalton Redpath, back-rows Allan Ferrie and Harry Borthwick, and full-back Jacob Henry, there was only seven of the 22 Knights who took the field in that final at the DAM Health Stadium available for last Saturday’s match against the same opposition [Patrick Anderson, Billy Wara, Cameron Scott, Grant Shiells, Fraser Renwick, Russell Anderson and Ruairidh Knott].

Moffat concedes that a lack of clarity on how the future was going to look was the key driver behind the pre-tournament exodus of players, but stresses that stopping to take stock at that point was the responsible approach.

“I think the players will tell you that they weren’t happy with how the club handled it,” he says. “When [former head coach] Rob Chrystie left, we didn’t want to put a squad together before we got a coach in, and the club was thinking: ‘Where are we here financially?’ So, we wanted to think seriously about whether we could do this, and obviously that was unsettling for the players, but it is a reflection of where we were at that time – and I think that was the right thing to do.

“We didn’t take long to go through the process – the financial guys went right through everything, and we came up with a plan – but we lost 10 or 12 players. We offered them contracts on virtually what they were on before, but they’d had that period of uncertainty and made the decision to go elsewhere.

“Good luck to them – that’s the modern game – I’m not going to criticise anyone for doing what is best for their career. It has made life tough this year but I’m a glass-half-full kind of guy so I see it as a great opportunity. We’re here to develop players to go to the next level and having 60 to 70 percent of our squad aged 22 or under means there is a lot of guys there who can do that.”

Onwards and upwards, Moffat says the club has come out of that period of introspection reassured that they are doing the right thing.

“We would do it again,” he confirms. “I remember when it [Super6] was first brought up, I wasn’t actively involved with the club at the time, but they asked me and a few other old worthies along to find out what we thought, and straight away I said: ‘If Super6 is there then we want to be in it’. That’s the mentality at this club: we want to be the best we can be, playing at the highest level we can.”

There has, however, been a change of philosophy towards more of a ‘one-club’ approach incorporating the youth section, the club sides and the Super6 entity, which seems like a sensible first step towards giving the new structure real roots.

Moffat acknowledges that getting buy-in from the wider Borders rugby community is a much bigger – and more complicated – challenge, and believes that actions are going to speak louder than words on this front.

“I’ll speak to anybody, but I’m not going to lose sleep over it and I’m not going to waste my energy going over the same old conversations,” he shrugs. “There are good people at every Borders club, and we know that they are working like hell to keep their club going so I respect that’s their whole focus, but what I’m about is the player.

“Andrew Mitchell is a good example. I don’t think he was handled well, and I think it’s a damned shame if that means the door is now closed for him to test himself at a higher level. If he wants to play the next 10 years for Hawick in the Premiership then that’s fair enough, because it is a good standard and he’ll be a great player for them, but he’s the kind of guy who we should be looking at and pushing to see how far he can go.

“One of the criticisms of Super6 in general is that there is a lot of boys not playing, but that won’t happen here. There is no way Southern Knights will put out their best team every week, and that’s a difficult one because the punters want to see their team at their best every week. But that’s not what we’re here to do. That wasn’t in the original document for Super6. So, any young player who is here will play. He’ll not be sitting on the bench or in the stand. Some might not cut it, but they’ll all get a chance

“The other thing I’ll say is that we aren’t looking to grab players without communicating with his club to say: ‘We rate this guy and we’d like to give him an opportunity’. And if someone from Selkirk comes to Southern Knights and it doesn’t work out, then Melrose shouldn’t be looking to keep him, he should be heading back to Philiphaugh. It has to be a two-way process.

“Similarly, if the best Southern Knights player this year is good enough then we’ll be pushing him on, and if Edinburgh or Glasgow don’t want him then we’ll be looking at a Championship side down south or a team in France, because that’s what it’s about … giving players opportunities.”

First things first, a Boroughmuir Bears team buzzing after their first win of the season away to Stirling County in their most recent outing will host the Knights next Friday night. A win won’t exorcise the demons of last weekend’s painful drubbing, but it might begin the process.