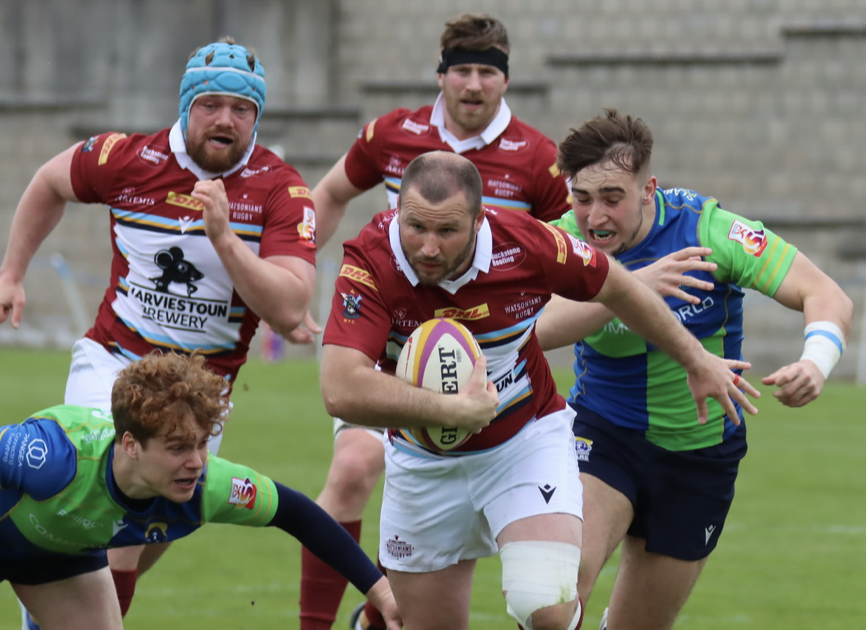 ANOTHER accomplished all-round display which included a key role in Ross McKnight’s fine opening try for Stirling County in their win over Southern Knights at The Greenyards on Friday night sees Logan Trotter retain the No 15 jersey, selected just ahead of the Watsonians youngster Harry Paterson, who caught the eye with his calmness under pressure and desire to run at every opportunity, and Boroughmuir Bears veteran Tom Brown, who worked hard and posed the greatest threat for his team on a day the Meggetland men struggled to shine in attack.

There was a few well taken tries by wingers this weekend, including Elias Cavan of Ayrshire Bulls and McKnight of Stirling County, however Arron Tait of the Bulls (wearing No 11 but on the right win) and Heriot’s replacement James Couper edge it.

Joe Reynolds of Watsonians and DJ Innes of Stirling County – Currie Chieftains’ centre partnership during the recent Premiership season – are at Nos 12 and 13, with Lewis Berg, also of Watsonians, unlucky to miss out.

Lee Millar made a strong case for selection at stand-off with some astute game management for Watsonians during the second half of their win over Boroughmuir Bears at Meggetland, on his first appearance in Super6 since last August, but Stirling County youngster Euan Cunningham gets the nod on this occasion, with a tidy all-round performance at The Greenyards featuring a nice flat pass to set up Innes’ try. Cam Jones was outstanding for Ayrshire Bulls, with his excellent blindside snipe and toe-poke ahead for Elias Cavan‘s try a highlight.

In the pack, Grant Shiells is once again named at loose-head, while Grant Stewart – who we have since learned is to leave Glasgow Warriors at the end of the season – is selected at hooker ahead of stiff opposition from Gregor Hiddleston of Stirling County and Fraser Renwick of Southern Knights, with Lewis Skinner of Stirling County at tight-head.

Hamish Bain, another Glasgow Warriors leaver, is named alongside academy prospect Alex Samuel, who is expected to pick-up his first senior pro deal with the Scotstoun outfit next season, in the engine-room. James Pow of Stirling County is unlucky to miss out on this occasion.

Jack Mann of Heriot’s is at blindside flanker for the third consecutive week, while Karl Main is at openside having been part of a highly effective Watsonians back-row unit against Boroughmuir Bears, and Harry Borthwick led the resistance for injury and red-card depleted Southern Knights so is selected at No 8, ahead of Iain Moody of Watsonians, the hard-working in defence Craig Keddie of Boroughmuir Bears and Benedict Grant of Stirling County.

Super6 Sprint: Watsonians grind out the win against Boroughmuir Bears

The post Super6 Sprint: round three team-of-the-week appeared first on The Offside Line.