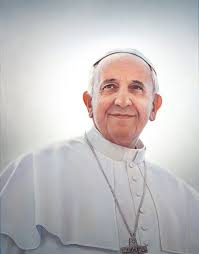 On Monday morning (April 25th) I am hoping to be ushered in to a private audience with Pope Francis in the Apostolic Palace in Rome. That is an unbelievable sentence for a Ballymena Presbyterian.

I will be honest and say that I hold the possibility lightly. A number of years ago Janice and I had an invitation to meet Bono when U2 played their Songs Of Innocence Tour in Belfast. We were shown in to the Cedarwood Lounge with many other guests but we were told that someone would come for us and lead us up to the inner sanctum.

We were also told that something might happen that meant Bono would be too busy. Lisa Marie Presley had turned up at a gig in America and caused Bono to have to cancel his meet and greet. We understood but thankfully Lisa Marie didn’t appear and we had a very pleasant 10 minutes with Bono.

I am not imagining Lisa Marie will appear in the Vatican on Monday either but I am also thinking that if Bono thinks he is important or busy then he pales into insignificance. Anything could happen.

If all goes well though, two Belfast clergy men will have some time to sit and converse with Pope Francis. What an honour that will be. Such an audience is not common or garden.

How? It is a good question. Over a year ago I was asked by Máirtín Ó Muilleoir to write a review of Pope Francis’ book Let Us Dream. Presbyterian minister reviews Pope was an interesting angle.

Having read the book I was challenged and inspired. Pope Francis was writing during Covid-19 and seemed to have his finger on the pulse of a world in a particular “stoppage” that would offer a chance to reflect on where we are and then envision a new way forward. It was full of the personal and prophetic.

Having jokingly mentioned the book and maybe getting the Pope at a 4 Corners Festival planning meeting someone mentioned that Austen Ivereigh had helped Pope Francis with the book and before you know it we had Austen agreeing to speak at the Festival. Austen seemed to really resonate with the Festival and got the Pope to send us a short video message which we were quite thrilled about. It meant we had the Pope opening our Festival and The Archbishop of Canterbury closing it!

While he was with us at the Festival Austen suggested a meeting with Pope Francis. Again we smiled but could not see that happening. Then the invitation came!

What does it mean for a Presbyterian minister to meet the Pope? I am not quite sure. For me it is like an invite from any world leader. An honour. I do not see that as just an honour for me or for Fr Martin but for the 4 Corners Festival board and committee. I see it as a recognition of what the Festival has achieved in bringing Belfast together, just as we did when we were awarded the CRC Civic Leadership Award in 2016. It is also an honour for Belfast and for all of our peacemakers.

I have no doubts that many in my denomination and other Protestants will call me a heretic! From what I have read and heard about Pope Francis I see him as a fellow follower of Jesus. I am particularly drawn to his humility and efforts to live outside the ostentatious ways of the Vatican. I have heard he even goes out in plain clothes to meet the homeless.

I am also very much impressed by his seeking of justice, working for peace and reconciliation and his very strong support for protecting the environment. These are all Biblical mandates that I can shake his hand over, even if he is the head of a different denomination.

What to say to him? That is an entirely different question. We are there as a result of our small efforts at peacemaking and so I imagine that is where we might begin.

He spoke in Let Us Dream about how us needing to rid our selves of ideologies and we have two distinct ideologies in Northern Ireland. Both set over a century ago with very different circumstances than we now have yet there is no pragmatism or change in ideologies. Has he clues to how we bring peace into such a situation?

I would also like to talk about the humility of Christ. My recent mantra that we follow the God of the manger the donkey, the towel and the cross seems familiar to his own discipleship. How has he done that? How can we as churches do it better?

There might be other things. Who knows. I’ll be sure to Surmise it all next week… if of course it ever happens at all.