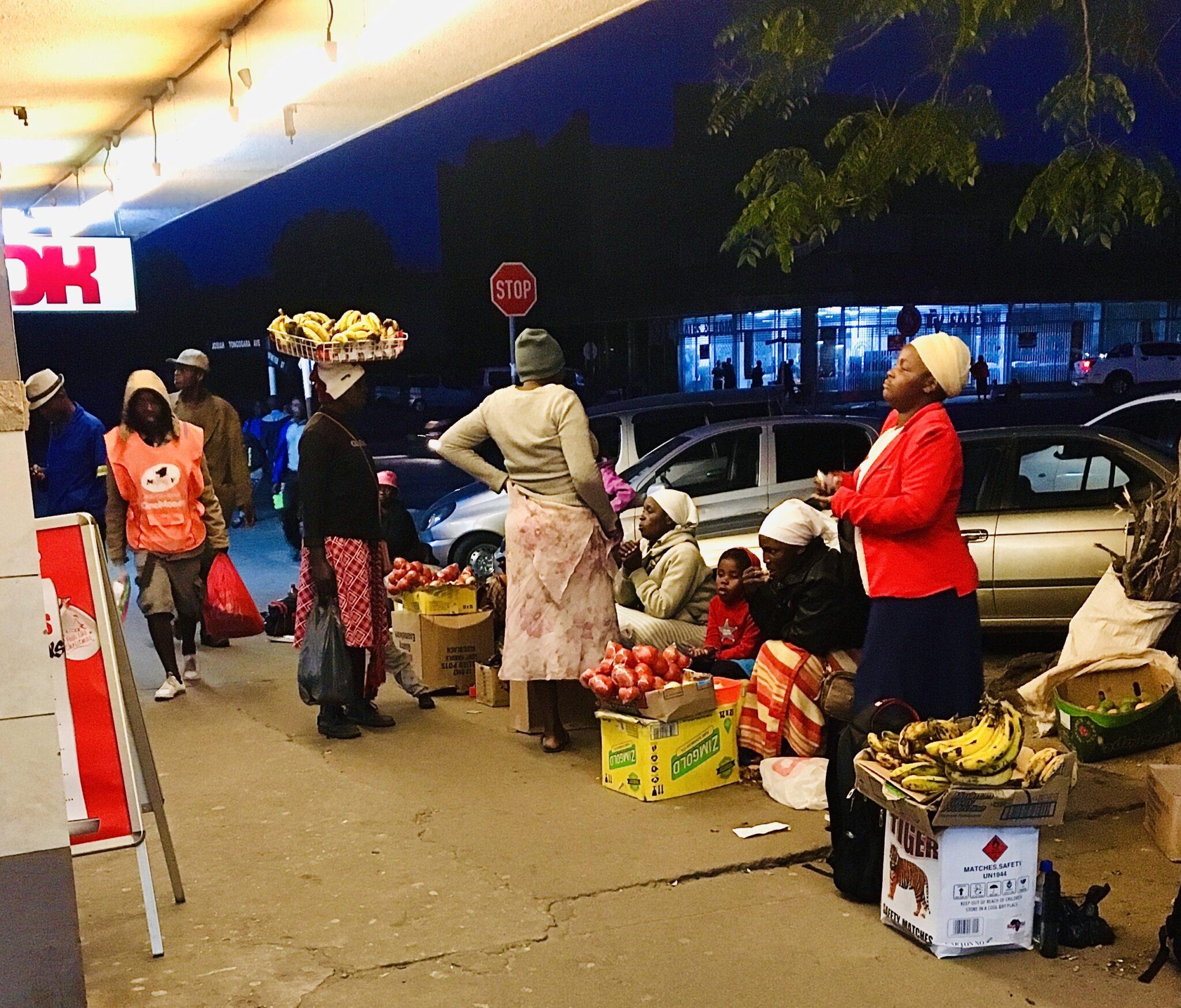 Zimbabwe had three confirmed casesand one recorded death of COVID-19 (coronavirus) as of 26 March, and a national disaster has been declared. So far suspected cases have been limited, but once the virus spreads through the population, it could be devastating.

In thinking about COVID-19 in Zimbabwe, and in Africa more broadly, three dimensions are important – fragility, resilience and inequality. It may be that obvious fragilities are counteracted to some extent by capacities to adapt and be resilient, but this depends on who you are and where you live.

The conditions for rapid spread of COVID-19, certainly in townships in urban centres, are all there – crowded housing, poor sanitation, lack of water, immune-compromised populations due to HIV and lack of services. For pandemic preparedness planners, this is a recipe for a major disaster.

As people get sick, the ability of the health services to respond is seriously limited. The one infectious disease hospital (Wilkins in Harare) has limited capacity, and apparently no intensive-care ventilation facilities. There are supposedly only 16 ventilator machinesin the country.

The medical profession is disillusioned and under-paid, and has recently been on a long strike, unheard of among committed doctors. Yesterday, nurses and some doctors walked out complaining of a lack of basic protective equipment. Many well-qualified doctors have left the country; even Cuban doctors, who have come to Zimbabwe’s aid in the past, may be fewer this time.

State neglect of the health service has been long-running, ever since the imposition of structural adjustment policies from 1991. In the past years it has got worse, and the public system has nearly collapsed. Private providers offer good services to the rich who can pay, but this is limited. And they are not geared up for a public health emergency.

The government’s response has been patchy so far. After ignoring warnings, an emergency declaration was made banning public gatherings and encouraging social distancing, but the President still proceeded with a rallythe next day. Meanwhile, the defence ministercaused an international sensation, and much opprobrium, by declaring that coronavirus had come from God to punish the West for imposing sanctions on Zimbabwe (see ‘Can there be a democratic health? From HIV/AIDS to Covid-19’ by Alex de Waal). The government distanced itself, but it rather highlights the dismal calibre of some at the highest level.

This current regime clearly doesn’t garner much trust. The political settlement has fallen apart. The state seems simply not to care. As Simukai Chigududescribes for the 2008 cholera outbreak a mixture of disdain and callous contempt is shown by the state. With the economy continuing to free-fall, Zimbabwe, by any indicator, is a ‘fragile state’ – and so one of the least able to respond to a pandemic.

Yet, indicators of fragility tend to focus on the functioning of the state, assuming that states must replicate those in the West or China. In a crisis, however, well-ordered, functioning states are often unable to cope. They are not used to responding to surprise, high variability, random shocks and an inability to plan and predict. They do not have systems of reliability at their core.

While the Zimbabwean state is clearly highly fragile, given years of neglect and a serious lack of resources, there are other aspects of the Zimbabwe setting that give hope. Resilience – the ability to respond to and bounce back from shocks, even transforming the situation along the way – is built by people in networks, embedded in social relations, with values and commitments that go beyond narrow individualism. We see a lot of these characteristics in Zimbabwe; and people have had to learn these skills and practices the hard way.

Over twenty years of economic and political chaos has ensured that food is supplied through informal means, across multiple social networks, even as food emergencies are declared at a central level. The informalisation of life – the sense of getting by and living with uncertainty (débrouillardisein the Congolese rendition) – has affected all relations. If there is nothing in the shops or no fuel at the pumps, then look elsewhere, ring someone up, find an alternative. Something will happen, always. It is these capacities that are essential for surviving in a pandemic, and that those in the West are learning fast, as shops empty, people panic buy and services cease.

The painful lessons of the HIV/AIDS pandemic are imprinted on Zimbabwe’s consciousness: first it was a blame game – gays, foreigners, sex workers, truck drivers; and then everyone realised this was affecting everyone, and many friends and family were dying. Leadership from Timothy Stamps, the health minister, the commitment of front-line health workers and community changes in behaviour (along with the supply of cheap anti-retrovirals) turned the tide, and Zimbabwe was one of the first in the region to show declines in the disease. These lessons will be important now; just as in West Africa where thelessons from Ebolawill be vital. Pointing the finger elsewhere doesn’t stop a virus, and everyone has to be committed to a collective response.

So now will be an important moment for rebuilding solidarities and forms of mutualism and moral economy that are at the heart of social resilience. With the UK Premier League cancelled, the WhatsApp groups dedicated to following Chelsea or Arsenal can be repurposed to helping each other, while churches will take on new meanings amongst congregations, even if not gathering physically. International connections are important too, althoughSouth Africa’s plan to build a fenceon the Zimbabwe border to prevent illegal, ‘diseased’ migrants entering sends out a dismal signal. Networks of kin across the world, connected though remittances flows and Western Union, will be vital, just as messages (and good Zimbabwean jokes and memes) via social media will be important.

Even in the UK, so subsumed in an individualistic culture for generations, the importance of community, connection and solidarity are being rediscoveredthrough ‘mutual aid’ groups. This will be much easier in Zimbabwe and, in the absent of a caring or competent state, will be essential.

Some of this is to do with biology – it is the elderly, for example, who seem to get the worst symptoms – but a lot is to do with deep structural inequalities. The colonial shape of cities is one aspect: crowded townships (for black African workers), distant from places of work and the suburbs originally reserved for whites, require daily travel on crowded transport networks. This is the perfect setting for contagion.

Add to this the crowded nature of such ‘high-density’ townships (yes it’s in the name – blacks were not deemed to need space), and the decline in services, mean that ‘social-distancing’ is impossible. This was ruled out in the colonial era, and has been made worse by economic decline, where travelling for precarious work and endless queuing are part of daily life.

Meanwhile, the edicts of ‘hand-washing’, good hygiene and healthy food are impossible to follow if tap water doesn’t run, people share boreholes and poverty restricts what food can be bought. This is what Paul Farmer refers to as ‘structural violence’– the violence of deep inequality that causes vulnerability and disease.

By contrast, those living in the low- or medium-density suburbs, and with resources, can distance themselves, and have resources to buy alternatives – privately pumped water, insurance for health care, money to buy things at inflated prices, or they’re even able skip the country if needs be.

Workers from the townships who service the city and offer labour in businesses and factories are those who are the most vulnerable to economic shutdown. They have experience of this, and many have already lost their formal jobs as the economy collapsed. They travel in to take up precarious, informal work, which can cease at a stroke without recompense.

Knee-jerk reactions by the state, in shallow attempts at asserting control, are often directed at the most vulnerable. Informal markets are closed because of notional hygiene concerns, for example. Those operating in recognised trading sites are taxed exorbitantly, even though this restricts access to toilets and washing facilities, especially for women. Extreme quarantine measures, in the context of a fragile state, may end up doing more harm than good, undermining social resilience.

It’s probably those in the rural areas who are the most resilient in the face of the COVID-19 crisis. Having food to eat or sell, and solid local networks to draw on, with limited expectations of the state anyway, many have successfully ridden out the roller-coaster ride that has been the Zimbabwean economy. Forms of collective action that can regrade roads in rural areascan surely also assist with pandemic response, in alliance with Zimbabwe’s many committed health care workers, community leaders and others.

Of course, as people become very critically ill, this is outside anyone’s ability to respond – and in Zimbabwe this includes the whole health system – so this is why enhancing the ability to stop the spread and building resilience is the essential challenge of the moment. As winter approaches, there is probably very little time.