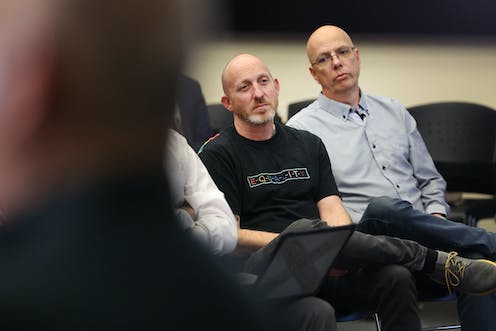 Suspect in the Colorado LGBTQ shootings faces hate crimes charges – what exactly are they?

Hate crimes are known as “bias-motivated” crimes in Colorado. The charges against the shooter are still preliminary, although Colorado Springs Mayor John Suthers said the attack “has all the trappings of a hate crime.”

The mass shooting rekindled memories of the 2016 massacre at Pulse nightclub in Orlando, Florida, that killed 49 people.

Hate crimes are rising across the U.S., but officials often resist the quick classification of incidents as a hate crime. Hate crimes have unique legal requirements. And even when police and prosecutors believe the elements of a hate crime are present, such crimes can be difficult to prove in court.

What is a hate crime?

I have studied hate crime and police for over 20 years.

Hate crimes are crimes motivated by bias on the basis of race, religion, sexual orientation or ethnicity. In some states, gender, age and gender identity are also included. Hate crime laws have been passed by 48 states and the federal government since the 1980s, when activists first began to press state legislatures to recognize the role of bias in violence against minority groups.

In order to be charged as a hate crime, attacks – whether assault, killings or vandalism – must be directed at individuals because of the prohibited biases. Hate crime laws, in other words, punish motive.

The prosecutor must convince the judge or jury that the victim was targeted because of their race, religion, sexual orientation or other protected characteristic.

If the defendant is found to have acted with bias motivation, hate crime charges often add an additional penalty to the underlying charge. Charging people with a hate crime, then, presents additional layers of complexity to what may otherwise be a straightforward case for prosecutors. Bias motivation can be hard to prove, and prosecutors can be reluctant to take cases that that they may not win in court.

It can and does happen, though. In June 2020, Indiana resident Shepherd Hoehn placed a burning cross and a sign with racial slurs and epithets facing the construction site where his new neighbor, who is Black, was building a house.

Hoehn was charged with and later pleaded guilty to federal hate crime charges in Indiana. A few months later, Maurice Diggins was convicted by a federal jury of a 2018 hate crime for breaking the jaw of a Sudanese man in Maine while shouting racial epithets.

How to charge a hate crime

The first use of the term “hate crime” in federal legislation was the Hate Crimes Statistics Act of 1990. This was not a criminal statute but rather a data-gathering requirement that mandated that the U.S. attorney general collect information on crimes that “evidenced prejudice based on race, religion, sexual orientation, or ethnicity.”

Soon, states began passing their own laws recognizing bias crimes. But hate crime legislation has not led to many charges and convictions.

Law enforcement officers struggle to identify hate crime and prosecute offenders. Even though 48 states have hate crime laws, 88% of law enforcement agencies, including local and state police departments, reported to the FBI that not a single hate crime had occurred in their jurisdictionin 2020.

In the late 1990s, I studied a specialized police hate crime unit in a city I called, for the purposes of anonymity, “Center City.” My book revealed that those detectives could distinguish non-hate crimes – for instance, when the perpetrator angrily used the n-word in a fight – from cases that are truly hate crimes, as when the perpetrator used it during a targeted attack on a Black person.

Without the right training and organizational structure, officers are unclear about common markers of bias motivation, and tend to assume that they must go to extraordinary lengths to figure out why suspects committed the crime.

Limits of the law

Advocates for hate crime victims maintain that police and prosecutors can do much more to identify and punish hate crimes.

Empirical evidence supports their claims. The FBI’s 2019 report contains 8,559 bias crimes reported by law enforcement agencies. But in the National Crime Victimization Survey, victims say that they experienced, on average, more than 200,000 hate crimes each year. This suggests that police are missing many hate crimes that have occurred.

Distrust of police, especially in Black communities, may dissuade minorities from even calling the police when they are victimized by a hate crime for fear they could also become victims of police violence.

All this means that perpetrators of hate crimes may not be caught and can re-offend, further victimizing communities that are meant to be protected by hate crime laws.

Editor’s note: This story incorporates material from an earlier story published on March 19, 2021.

Jeannine Bell does not work for, consult, own shares in or receive funding from any company or organization that would benefit from this article, and has disclosed no relevant affiliations beyond their academic appointment.

Suspect in the Colorado LGBTQ shootings faces hate crimes charges – what exactly are they?