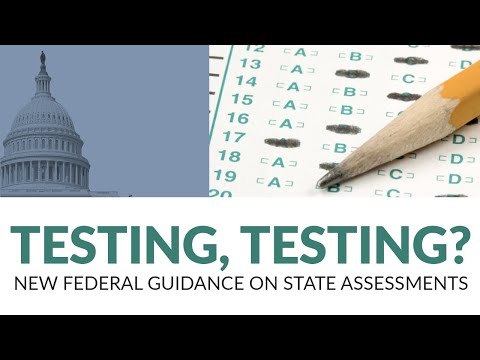 The U.S. Department of Education (ED) waives accountability requirements, but questions remain on whether state assessments will go forward as planned this year. Plus, the Federal Communications Commission (FCC) launches the biggest federal program ever to close the digital divide, the House advances President Biden’s plan for COVID-19 relief, and Dr. Miguel Cardona is officially the new Secretary of Education.

Last week, ED sent new guidance to chief state school officers on assessments, reporting, and accountability for the 2020–2021 school year. First, ED said it will waive all federal accountability requirements under the Every Student Succeeds Act (ESSA) for one year—going further than guidance issued by the Trump administration. This means states will not have to issue school ratings or identify schools for comprehensive or targeted support this summer and fall.

As a condition of receiving a waiver, states still will be required to publish school report cards, including data from the 2020–21 school year on chronic absenteeism, high school graduation rates, student achievement, test participation rates, and more. States also will be required to continue supporting schools that were identified for comprehensive or targeted support before the pandemic.

These waivers should sound familiar to viewers. That’s because it is the second consecutive year states can suspend their accountability systems due to the pandemic. However, we know that even before COVID-19, states were not always using ESSA’s accountability provisions to promote equity for historically underserved students. Our reporting, for example, finds that many of the lowest-performing schools were overlooked for support. Pausing accountability for another year further delays when additional students can benefit from these resources.

States will receive a template to apply for accountability waivers, which ED has not yet released.

The guidance also addressed ESSA’s requirement for annual, statewide assessments. ED waived this requirement last year given unexpected, widespread school closures at the onset of the pandemic, and several states now are asking for another reprieve. ED’s letter highlights flexibilities states can use to modify their assessment systems this year, but stops short of inviting “blanket waivers” of ESSA’s testing requirements. These flexibilities include extending the test window or even postponing administration to the fall, giving tests remotely, and shortening the test. Notably the guidance says that students should not be brought back into school buildings “for the sole purpose of taking a test.”

It is unclear, however, whether states would need a waiver to pursue some of these flexibilities—like postponing tests to the fall—or whether other flexibilities, like using local assessments instead of state tests, would also be permitted. Moreover, several states still are pursuing “blanket waivers” to forego all summative assessments this year.

Given these unanswered questions and pending waiver requests, last week’s letter probably is not the final word from ED on assessments. That’s why we joined more than forty organizations in calling on ED to maintain this critical civil rights requirement and not permit waivers that would allow states to substitute local assessments in place of statewide tests or to assess only a subset of students. Stay tuned to Federal Flash for further action and guidance, including the forthcoming waiver template.

In other agency news, the FCC established rules for a $3.2 billion Emergency Broadband Benefit Program—the largest federal program ever to help low-income households access affordable internet. The program, which was funded in last December’s coronavirus relief package, will provide $50 monthly discounts on broadband service for eligible households, plus a one-time $100 discount on a computer or tablet purchase. Households living on tribal lands will be eligible for $75 monthly discounts on their internet bills.

The program is expected to be up and running in sixty days and will be open to several groups, including households with children who receive free or reduced-price lunch and Pell grants. As the FCC’s Acting Chairperson Jessica Rosenworcel explained, the new program will make a meaningful difference in people’s lives, including “those lingering outside the library with a laptop just to get a wireless signal for remote learning.” More information on the program can be found on its website at https://www.fcc.gov/broadbandbenefit.

While the new program is a huge investment in closing the digital divide, even more could be done to ensure students have access to the broadband and devices they need to participate fully in school. We know that one in three students of color currently falls into the homework gap and lacks high-speed home internet. That’s why the Alliance for Excellent Education (All4Ed) and its Future Ready Schools® initiative are calling for further action. Specifically, we are urging Congress and President Biden to support $7.6 billion to close the homework gap for students, and the FCC to update the E-rate program so that existing funds can be used to support remote learning during the pandemic. You can join the campaign and sign the letter to support this critical funding at futureready.org/homeinternet.

COVID-19 Relief Advances in the House

Over on Capitol Hill, the House passed President Biden’s $1.9 trillion coronavirus relief package, the American Rescue Plan Act, over the weekend. The 219–212 vote broke down along party lines, with no Republicans voting for the bill and two Democrats joining the opposition. Democrats hope to get the bill passed and signed into law by March 14, when current expanded unemployment benefits are set to expire. As we covered in greater detail on a previous Federal Flash, the bill includes $130 billion for K–12 education and, unlike past relief packages, 20 percent of district funds would need to be spent on activities to address interrupted learning and the pandemic’s disproportionate impact on vulnerable groups of students.

Finally, a little good news. On a 64–33 vote, the Senate confirmed Dr. Miguel Cardona to be the next Secretary of Education. After sailing through a nomination hearing last month, Connecticut’s education commissioner received bipartisan support and a relatively drama-free confirmation process—in stark contrast to his predecessor. Secretary Cardona’s confirmation was received warmly by education and civil rights advocacy groups. In a statement, All4Ed CEO Deb Delisle said, “We look forward to working with Secretary Cardona to tackle long-standing inequities in education that have been exacerbated by the COVID-19 pandemic for our most vulnerable students.”

Anne Hyslop is assistant director for policy development and government relations at All4Ed and Ziyu Zhou is a policy analyst.