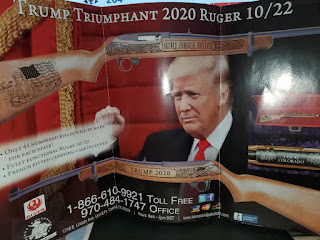 Thank God I Didn't Waste My Money on One of These!

For those of us sane Americans, it is astounding the level of cult like devotion that some of our fellow countrymen and women have for Donald Trump.  On Long Island, where I live, the days leading up to the election have seen Trump caravans consisting of cars and trucks festooned with Trump flags driving up and down our major roads.  For me, one of the more ironic manifestations of Trump support are Trump 2020 face masks, given that he consistently downplayed the severity of Coronavirus to the American people and generally eschewed the wearing of masks, only to himself end up being infected with the virus last month.

But one of the more bizarre offerings I have seen from the Trump Cult comes from this brochure that I received in the mail several months ago.  I have no idea how I ended up on their mailing list, but at any rate, I found it so hilarious I decided to hold on to it and revisit it after the election. 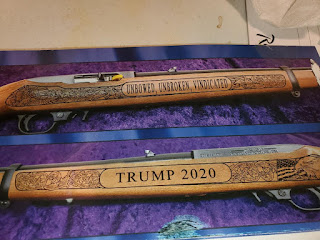 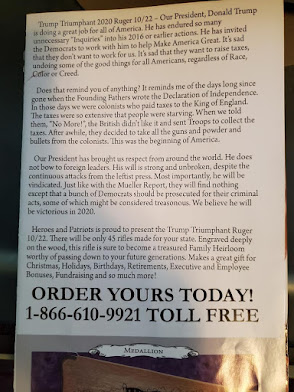 The part I find especially funny is the motto "Unbowed, Unbroken, Vindicated" etched into the rifle, as it is a shameless ripoff of the motto of House Martell from Game of Thrones, "Unbowed, Unbent, Unbroken."

While it is still too soon to call the race, it seems pretty clear that Trump has no chance to achieve the needed 270 Electoral College votes he will need to win.  In fact, it looks to be the reverse of the 2016 race, where he will end up with the 232 that Hillary Clinton got while Joe Biden will end up with the 306 attained by Trump in the previous election.  One wonders if Trump will agree that Biden will have achieved one of the greatest presidential wins ever, considering that Trump's 306 Electoral College votes in 2016 were not accompanied with a win in the popular vote, whereas Biden is currently on track to have approximately 5 million more votes than Trump.  Donald Trump is neither unbowed, unbroken, nor vindicated.

Thank God I Didn't Waste My Money on One of These!