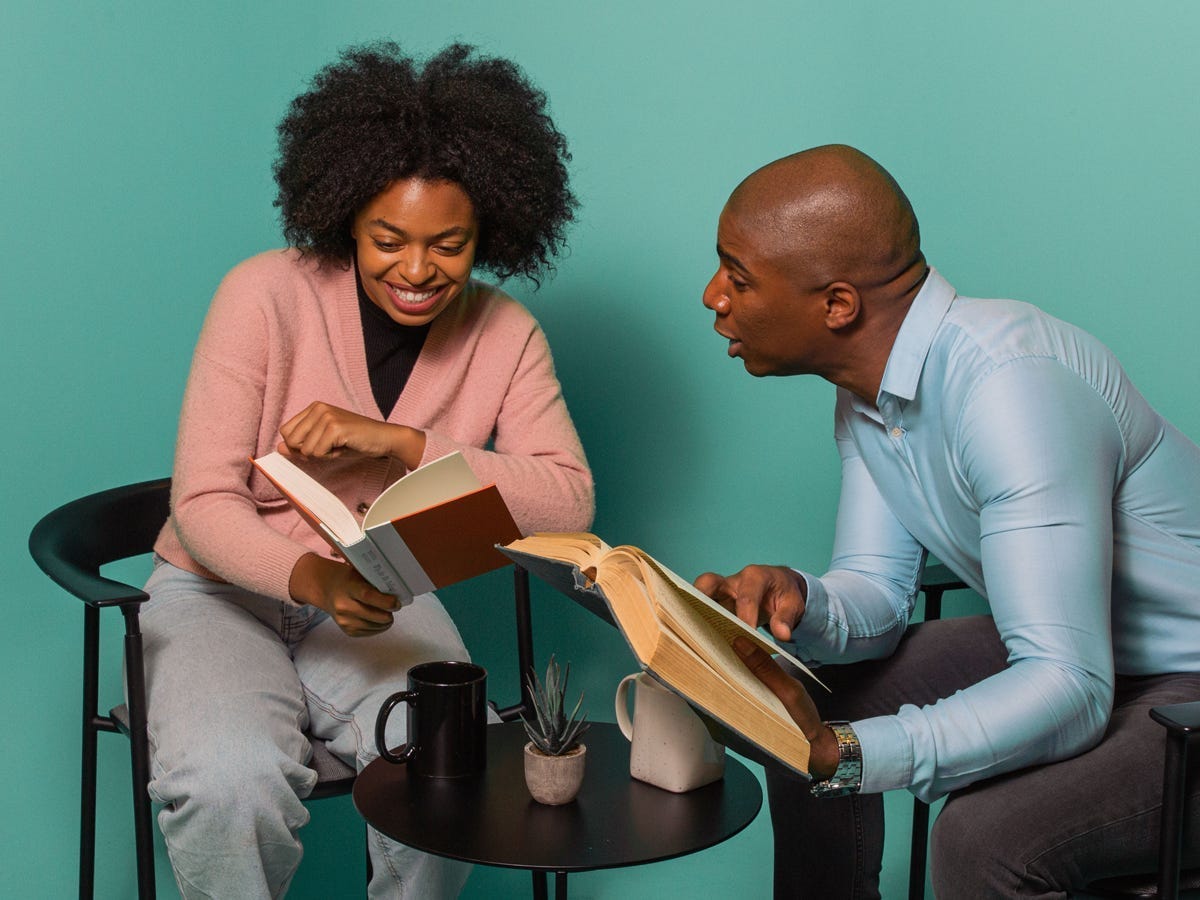 The 23 most popular books of the past year, according to Goodreads members

Because there are nearly infinite books in the world, it can be difficult to know which one to pick up next. When I don't know what to read, I turn to fellow readers for the books they've read and adored, gravitating towards the titles I hear my friends mention over and over again.

Similarly, the internet can provide plenty of word-of-mouth reviews and rankings. The books on this list come from the most popular Goodreads members picked up in the last year, according to the 2021 Goodreads Reading Challenge (where readers aim to read as many books as they can in one year). Goodreads is the world's largest platform for readers to rate, review, and discover new book recommendations, with over 125 million members sharing their favorite reads.

If you're looking to start off the new year right with a great new read, here are some of the most popular books readers are snagging right now.

The 23 most popular books right now, according to Goodreads members:

"The Midnight Library" by Matt Haig

Available at Amazon and Bookshop, from $13.29

Nora Seed feels stuck in her life, bound to the choices she made that she still isn't sure were right. When Nora is ready to leave it all behind, she finds herself in a peculiar library, where each of the infinite books offers a portal to a parallel world, showing her all the many ways her life could have been slightly or drastically different, had she made other decisions.

"The Invisible Life of Addie LaRue" by V.E. Schwab

Available at Amazon and Bookshop, from $16.19

"The Invisible Life of Addie LaRue" is a genre-bending fantasy book about a young woman named Addie who, in 1714, makes a bargain with a dark god and becomes cursed to be forgotten by everyone she meets. Addie's story spans three centuries and countless countries — until she meets a boy in New York City in 2014 who can finally remember her.

"The Seven Husbands of Evelyn Hugo" by Taylor Jenkins Reid

Available at Amazon and Bookshop, from $9.42

Evelyn Hugo was an iconic Hollywood actress, just as notoriously remembered for her seven marriages as she was for her movie performances. Finally ready to tell her story, Evelyn Hugo chooses a little-known journalist named Monique, who goes to Evelyn's luxurious apartment to hear the truth behind Evelyn's lifetime of friendships, ambitions, and many loves.

"To Kill a Mockingbird" by Harper Lee

Available at Amazon and Bookshop, from $7.19

Considered one of the greatest novels of all time, "To Kill a Mockingbird" is an unforgettable historical fiction novel from 1960 that follows young Jean Louise Finch during a time of great racial inequality in her community. Her father, Atticus Finch, is a lawyer defending a Black man wrongly accused of a terrible crime as he faces a community desperate for a guilty conviction.

Available at Amazon and Bookshop, from $12.44

"The Great Gatsby" is a classic about the wealthy Jay Gatsby, set during the Jazz Age in New York. When Nick Carraway moved to Long Island to find a job in New York City as a bond salesman, he meets his next-door neighbor, Jay Gatsby, who throws extravagant parties and is constantly in pursuit of the stunning Daisy Buchanan.

"Where the Crawdads Sing" by Delia Owens

Available at Amazon and Bookshop, from $9.98

Kya Clark is known to most as the "Marsh Girl," running barefoot and wild in her quiet fishing village, having attended only one day of school. When a popular young boy is murdered, Kya's story unravels as the town accuses her of causing his death.

Available at Amazon and Bookshop, from $7.48

"1984" is an iconic science fiction novel that imagines a dystopian future ruled by a totalitarian state, perpetually at war and at the mercy of strong propaganda. Winston Smith works at the Ministry of Truth, rewriting historical records to conform to the state's version of events while secretly dreaming of rebellion and imagining what life would be like without Big Brother.

"Pride and Prejudice" by Jane Austen

Available at Amazon and Bookshop, from $5.47

"Pride and Prejudice" is a cherished, classic Jane Austen romance between Elizabeth Bennet and Mr. Darcy. Loved for their unique relationship comprised of witty banter and flirting, Elizabeth and Mr. Darcy fall for each other in this story of class, wealth, and the duty of marriage.

"The Song of Achilles" by Madeline Miller

Available at Amazon and Bookshop, from $10.35

In this Greek mythology-inspired tale, Patroclus is an awkward young prince, exiled by his father because of a misunderstanding when he meets the legendary Achilles. As the two form a unique relationship, Helen of Sparta is kidnapped and Achilles, along with all the heroes in Greece, joins the cause against Troy as they face a choice between love and fate.

"The Vanishing Half" by Brit Bennett

Available at Amazon and Bookshop, from $15.70

Though the Vignes twin sisters grew up identical in their small, southern community, their lives split in young adulthood as one sister now lives in the same community with her Black daughter while the other passes for white in a white community. A beautiful story of influence and decisions emerges as their lives intersect over generations when their daughters finally meet.

Available at Amazon and Bookshop, from $13.09

Set on a remote island off the coast of Ireland, a fascinating group of friends and family converge to celebrate the marriage of a rising television star and an ambitious magazine publisher. When someone is found dead, everyone becomes a suspect with their own strange and mysterious potential motives.

"People We Meet on Vacation" by Emily Henry

Available at Amazon and Bookshop, from $9.98

Alex and Poppy became best friends on a happenstance summer road trip in college, spurring a tradition of summer trips together — until two years ago, when everything changed between them. Though they haven't spoken since, Poppy desperately needs her best friend back and reaches out to Alex to see if they can try to rekindle their friendship in this adorable romance.

"It Ends with Us" by Colleen Hoover

Available at Amazon and Bookshop, from $12.99

Ryle Kincaid is a stunning, assertive neurosurgeon with a soft spot for only Lily, who can't believe her luck that there's a spark between them. As the two fall into a passionate relationship, Lily can't help but think of her first love, Atlas. As her relationship with Ryle becomes more and more complicated, Atlas reappears and further complicates everything.

"The Four Winds" by Kristin Hannah

Available at Amazon and Bookshop, from $14

"The Four Winds" is an award-winning historical fiction novel that illuminates the Dust Bowl era of the Great Depression, where farmers faced deadly droughts that often forced them from their land. To learn more about why we love this book, you can check out our review here.

Available at Amazon and Bookshop, from $16.80

Famous surfer Nina Riva is preparing to host her iconic, annual party with her equally famous siblings, though she doesn't know the party will be literally up in flames by morning. As each sibling's story unravels, this historical fiction novel traverses from the party in 1983 to the Rivas' childhood, revealing long-buried secrets and spinning the present entirely out of control.

"The Silent Patient" by Alex Michaelides

Available at Amazon and Bookshop, from $12.99

Alicia Berenson had a seemingly perfect life with a painting career, a beautiful home, and a photographer husband until one night her husband returned home and Alicia shot him five times in the face and never spoke again. As Theo Faber, a criminal psychotherapist, attempts to work with Alicia to get her to talk, his own twisted motives emerge in this gripping psychological thriller with many versions of the truth.

Available at Amazon and Bookshop, from $13.12

When a bank robbery goes terribly wrong, eight strangers find themselves being held hostage in an apartment with more in common than they imagined. Each anxious for their own reasons, the tensions mount as the police surround the apartment in this thought-provoking story of compassion where all the pieces slowly fit together.

Available at Amazon and Bookshop, from $9.97

First Son Alex Claremont-Diaz has a long-running nemesis: Prince Henry. When the tabloids catch the two in a confrontation, the plan for damage control includes staging a fake friendship between the boys in this fun, fan-favorite Queer romance.

Available at Amazon and Bookshop, from $9.33

Connell and Marianne pretend not to know each other in school, dropping the facade when Connell picks his mother up from a housekeeping job at Marianne's house. The two form a peculiar connection, drifting apart and back together over the years in this story about class, friendship, and human nature.

"The Hobbit, or There and Back Again" by J.R.R. Tolkien

Available at Amazon and Bookshop, from $12.92

Originally written for the author's children, "The Hobbit" is a beloved prequel to the "Lord of the Rings" series where readers are introduced to the fantasy world of Middle-earth. When Bilbo Baggins is tricked into hosting a party, the wizard Gandalf convinces him to join him and a group of dwarves on an adventure to retrieve a treasure guarded by a dragon, igniting an epic tale adored by readers of all ages.

Available at Amazon and Bookshop, from $7.35

January Andrews is a bestselling romance author, plagued with writer's block and staying at a beach house to try and write a new novel by her editor's deadline. When she meets the next-door literary fiction writer named Augustus, they decide to switch genres in an attempt to escape their creative ruts.

"The Last Thing He Told Me" by Laura Dave

Available at Amazon and Bookshop, from $13.50

Before Hannah's new husband, Owen, disappears, he manages to slip her a note reading "protect her," which she knows refers to his 16-year-old daughter, Bailey. When the FBI arrests Owen's boss and comes to their home unannounced, Hannah and Bailey realize Owen isn't who they thought and must uncover the truth behind his disappearance while building a future together of their own.

"The Duke and I" by Julia Quinn

Available at Amazon and Bookshop, from $8.27

"The Duke and I" is the first Regency-era romance in the "Bridgerton" series, about Daphne Bridgerton who agrees to a fake courtship with Simon Basset, the Duke of Hastings. While Daphne needs her own prospects to soar and the Duke intends to avoid marriage altogether, their plan seems to be working perfectly — until the two can't deny the spark that seems to be igniting between them. If you love this book already, check out our list of other Julia Quinn novels to find your next great romance read.

The 23 most popular books of the past year, according to Goodreads members