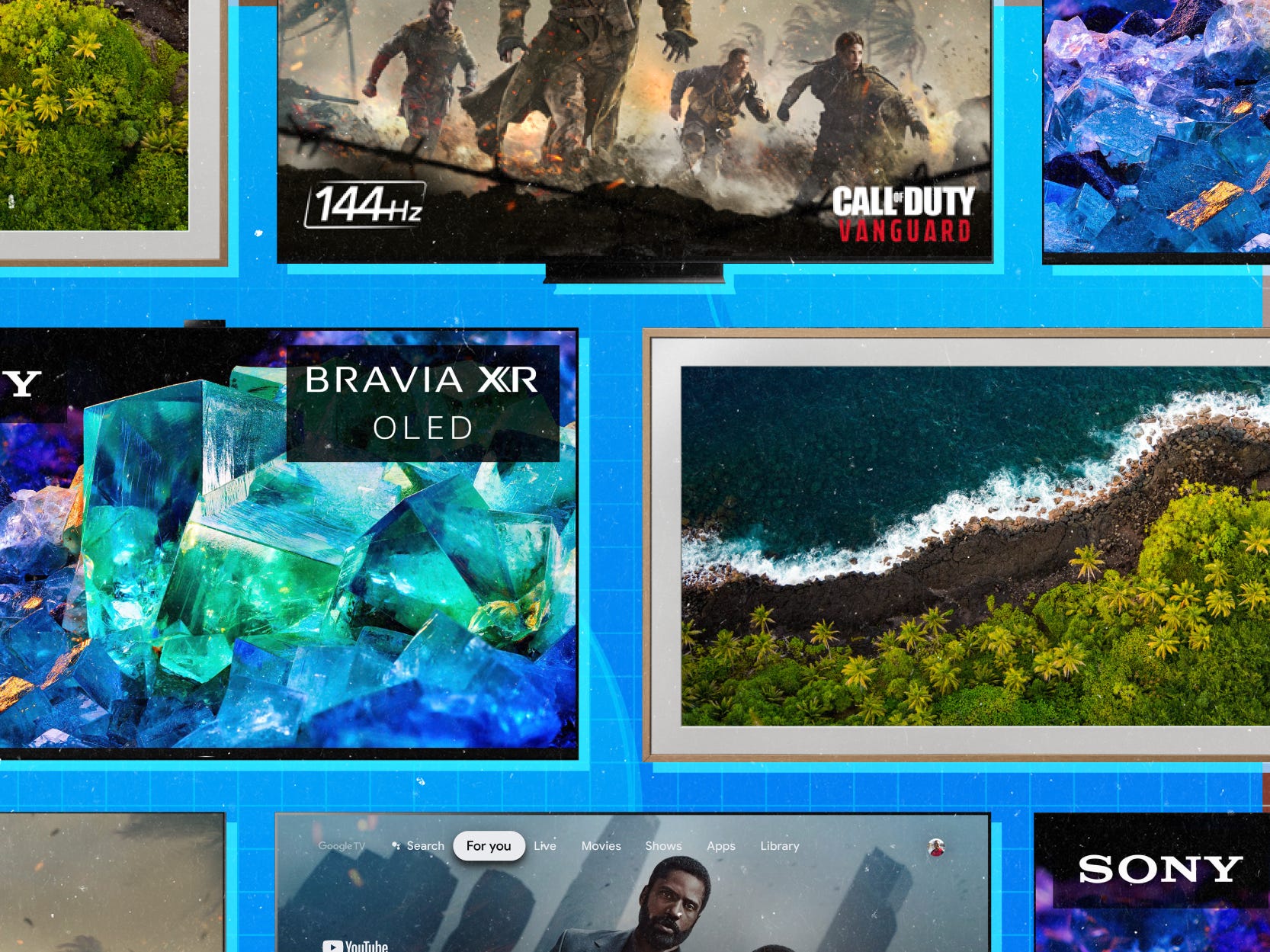 The 7 coolest TVs unveiled at CES, including vibrant displays with brighter screens and smoother gaming performance

Every year, TV manufacturers announce their newest displays at CES, the year's biggest tech show. For CES 2022, Sony, Samsung, Hisense, LG, and TCL all detailed their upcoming lineups, highlighting new 4K and 8K TVs that shoppers can expect to find later this year.

Though most of these new models are similar to their 2021 predecessors, there are some key upgrades on the way that have me excited. Most notably, Sony is set to release the world's first consumer OLED TV with quantum dots, a technology that should provide a nice boost in color performance.

New Mini LED TVs are also on the way, including an affordable model from Hisense that looks like it could be the 2022 mid-range TV to beat. Gamers also have some cool new displays to look forward to from TCL and Samsung.

Though I haven't had a chance to see these new displays in person just yet, there's a lot I can glean from the specifications detailed during CES, buoyed by my experience testing TVs for nearly a decade. Based on what we know so far, these are the displays that I'm most excited about in 2022.

Keep in mind, however, that pricing and exact release dates haven't been announced for most of our picks. That said, all of the TVs I selected are set to be available to buy this year.

What is it: The A95K is Sony's new flagship OLED for 2022. It carries over the best-in-class contrast and processing that made the company's 2021 models so impressive, and adds one important new feature: quantum dot color technology.

Why we think it's cool: The A95K is expected to be the first consumer OLED (a type of panel that can brighten and dim individual pixels) to use quantum dots. This advanced color tech enables the TV to deliver more vibrant colors than any other OLED on the market. On regular OLED TVs, colors can wash out in bright scenes, but Sony says quantum dots let the A95K maintain rich, bold saturation. As an added bonus, the TV even comes with Sony's new Bravia Cam for video chatting and gesture controls.

What's questionable: Though it's been speculated that QD OLED panels could enable higher brightness than regular OLEDs, Sony says we shouldn't expect a big increase in the A95K's peak brightness compared to last year's top OLEDs. In other words, QD OLED doesn't look like it will deliver the perfect combination of OLED contrast and LCD brightness that some have been hoping for.

When you can buy it and how much it costs: The A95K will launch this year and Sony says pricing and availability will be detailed in spring. If pricing for Sony's 2021 flagship OLED is any indication, we can expect the new 65-inch model to sell for at least $4,000.

What is it: LG's C Series is its most well-rounded 4K OLED option, and the 2022 C2 builds on last year's top-rated C1 with a brighter screen and an improved processor.

Why we think it's cool: The 2021 C1 was my pick for the best 4K TV of 2021, and the C2 is expected to carry over the same overall performance and value. There's also a new 42-inch screen size that should be great for gamers.

What's questionable: Though the C2's new "OLED Evo" panel should provide a slight increase in brightness over last year's C1, I don't expect a big jump. Based on what's been announced, the C1 and C2 will likely look similar.

When you can buy it and how much it costs: The C2 will be released later this year. LG is expected to announce pricing and exact availability in the spring. For reference, the 65-inch C1 currently sells for $1,900.

What is it: Sony's new Z9K is the company's top 8K TV model for 2022. In addition to offering four times the number of pixels as a 4K TV, the set uses Mini LEDs for enhanced contrast and brightness, which should deliver better picture performance than last year's Z9J model.

Why we think it's cool: The Z9K is one of the first Sony TV's to use Mini LEDs. LCD displays with Mini LEDs can have more precise control over contrast. I was impressed with what companies like Samsung did with Mini LEDs in 2021, so I'm excited to see what Sony does with the tech. Like Sony's flagship OLED, this model also comes with a Bravia Cam.

What's questionable: When it comes to what our eyes can actually see, the benefits of 8K versus 4K remain debatable, especially since there really isn't any 8K content to watch. 8K TVs still look undeniably gorgeous, though, especially on screen sizes of 75 inches and above.

When you can buy it and how much it costs: The Z9K will be released this year. Exact pricing and availability will be announced in spring. For reference, Sony's 2021 Z9J 8K TV currently starts at around $5,500.

What is it: Hisense's U8H is set to be the company's top mid-range 4K TV this year. It improves upon its 2021 counterpart, the U8G, through the addition of a Mini LED backlight for better contrast.

Why we think it's cool: The U8G was one of the best TVs in 2021, and the U8H looks like it could offer even better performance for a similar price. It's also great to see another Mini LED option join TCL's 6-Series in the mid-range TV market.

What's questionable: Mini LEDs are superior to regular LEDs in theory, but they have to be implemented in the right way to truly offer an upgrade. This will be the first time Hisense offers a Mini LED TV in this price range, so we're curious to see how it stacks up against TCL and Samsung.

What is it: TCL's 8-Series is its high-end 4K Mini LED TV designed to compete with other flagship models from brands like Samsung. We don't know a ton about the 2022 model just yet, but we do know that it will support a 144Hz refresh rate instead of the usual 120Hz we see on most TVs of this type.

Why we think it's cool: A 144Hz refresh rate is ideal for fast-paced gamers who hook up a PC to their TV. If you have the gaming hardware to support it, the higher refresh rate should enable smoother gameplay on-screen. TCL is also known for its competitive pricing, so we're hopeful this latest 8-Series model can maintain cutting-edge performance at an affordable price.

When you can buy it and how much it costs: TCL hasn't announced exact pricing or availability for its 2022 lineup, but new TVs usually start rolling out in the spring.

What is it: The Samsung QN90B is the successor to last year's QN90A, which was our favorite QLED TV of 2021. The TV features a Mini LED backlight and quantum dots for impressive contrast and colors.

Why we think it's cool: Samsung's Neo QLEDs get close to the black level performance of an OLED while delivering higher brightness. This new model also boasts some promising new processing features that could lead to noticeable improvements over last year's model. Samsung also says it will support 144Hz gaming on some 2022 Neo QLED TVs, but it hasn't specified if the QN90B is one of those models.

When you can buy it and how much it costs: The QN90B will launch in 2022. Samsung is expected to detail pricing and availability in the spring. The 2021 QN90A currently sells for $2,200 in a 65-inch screen size.

What is it: Samsung's premier lifestyle TV, The Frame, is designed to look like a piece of art hanging on your wall. It also boasts solid QLED picture quality to match its stylish aesthetic, giving design-conscious buyers the best of both worlds.

Why we think it's cool: Previous iterations of The Frame have lived up to their name, combining a QLED TV and a handsome living room display piece in one. This latest version uses a new matte, anti-reflective screen, which should make the TV look even more like an actual piece of canvas.

What's questionable: With the Frame, you're mostly paying for design. Though these sets still offer solid image quality, you can get better picture performance from Samsung's Neo QLED lineup.

When you can buy it and how much it costs: Pricing and availability have not been confirmed yet, but Samsung TVs typically launch in the spring. For reference, last year's 65-inch Frame TV currently sells for around $1,800.

The 7 coolest TVs unveiled at CES, including vibrant displays with brighter screens and smoother gaming performance