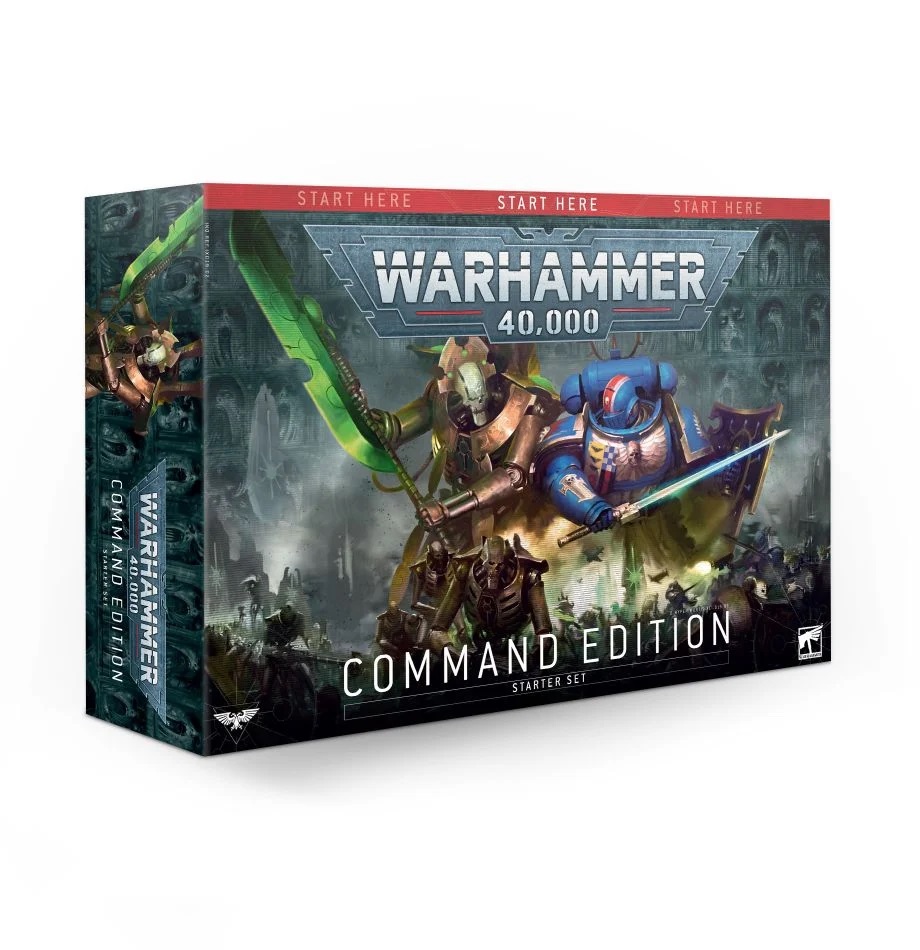 The Beginner’s Guide to Space Marines

Use this article as your beginner’s guide to Space Marines when it comes to creating your first army while saving a few bucks.

The most common thing a beginner Space Marine player grabs to get started is the Command Edition box set for Warhammer 40k. That’s the best-valued starter box with 2 armies, terrain, a core rule book, and some other accessories as well. The beginner’s guide that we’re going to lay out for you here is going to be based on that box set.

What’s in the box?

As a beginner the question you might ask next is, now what should I get?

If you want a deep strategic breakdown on how to build an army you can check out our 4 Pillars of Army Design Training. Watch the full series for free by clicking here!

The Beginner’s Guide to Space Marines – HQ and Troop choices

As the Beginner’s Guide to Space Marines we’re going to layout the best way to add units to that Command Edition starter box. The first thing you need to look at is what detachment you’re going to build. This box set already comes with a Patrol Detachment but if you’re going for a full 2,000 point army you’ll want to build a Battalion Detachment.

The requirements for a Battalion Detachment are two HQ choices and three troops. As a beginner, the first thing you’ll want to look at is what you already have. That Command Edition box gave you one HQ choice already with the Primaris Captain. You also have a troop choice with the Assault Intercessors. With those in your roster, we’ll begin to fill out those required slots.

If I was designing your army, the thing that I would suggest you add are two squads of Assault Intercessors. As an alternative, you could get the regular Primaris Intercessors for more long-range firepower. Both options are fine and will give you the required 3 troop choices needed to fill out the detachment. The good news is one box of regular Intercessors will give you two squads of five. Now you’ll only have to buy a single Intercessor box.

Now you’ll have to add another HQ choice. As a beginner we recommend the Primaris Librarian, or even better, the Librarian in Phobos Armour. Having a Librarian gives you psychic power abilities. With those, you can Deny the Witch to stop your opponent from casting powers and use your own psychic powers. By having the Phobos Librarian you can set up in the middle of the battlefield during deployment. Whichever you choose to go with will give you a second HQ choice and fill up that required spot.

The Beginner’s Guide to Space Marines – What models to add

What’s cool about your army is that you’ve already got a squad of Outriders which move fast on the battlefield. This gives you some pretty good momentum against your opponent with speed on your side. With that said, we’re going to recommend adding a second squad of Outriders. This will allow you to flank either side of the battlefield. If you want to get more aggressive you can pull a maneuver where you go on a hard left or hard right flank with both Outriders.

The Beginner’s Guide to Space Marines – Use this strategy

With all these pieces in place you can use your Intercessors to control the objectives in your deployment zone. It doesn’t stop there though. Next you can move your other squad of close combat troops to the middle objectives and fight for those. Since your Tactical Warsuits and Outriders are putting pressure on your opponent it shouldn’t be that difficult.

The Primaris Captain lets your Outriders and Intercessors within six inches of him re-roll their hit rolls of one. Make sure he’s in position to use that ability for maximum synergy with those units. The final piece to this synergy will be having that Phobos Librarian nearby to use his psychic powers for additional support.

The only thing missing for this would be long range fire power. So any additional points that you wanted to use to build up that army, I would use Gladiator Tanks. These tanks have a ton of fire power and they have good point value. They’ll give you that much needed artillery to help punch through your opponent’s army. The Gladiator Valiant has the big heavy weapons so that version makes the most sense for this army.

In conclusion, your initial force here is a Battalion Detachment consisting of the following:

With this army you have 1,370 points or a 66 Power Level before you add more to it. This is how I would start off as a beginner. Start with a very basic Space Marine army that gives you something effective and easy to build. The best part about this is you don’t need to buy a ton of miniatures.

In order to get more advanced list-building strategies and tactics for Space Marines then check out our 4 Pillars of Army Design Series! It’s a completely free training we’ve put together that gives an in-depth look at how we design tactical armies for Warhammer 40k. You can get access to the entire video series for free by clicking here.

Perhaps you’d like something with more of a personal touch? If that’s the case then book a complimentary army design session with us! There you’ll get to have a 1-on-1 call with someone from the Nights team to help you get started on building your new army list. Just click the link below to book a session now!

>> Click here to book your complimentary army design session with us!

The post The Beginner’s Guide to Space Marines appeared first on Nights At The Game Table.

The Beginner’s Guide to Space Marines