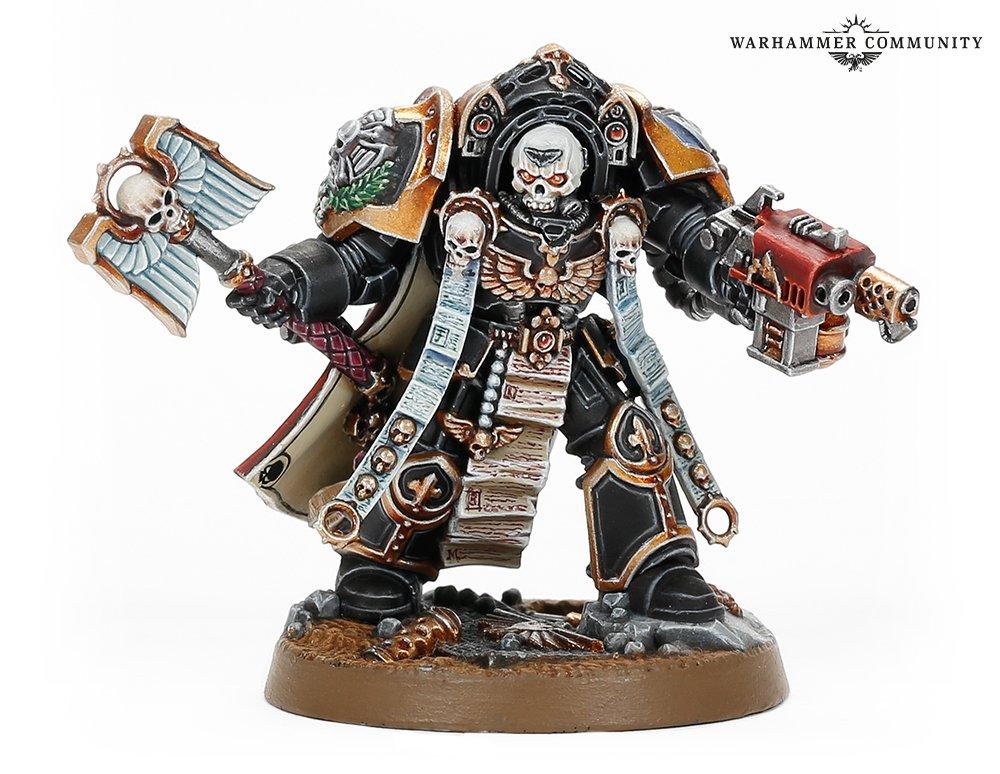 The Best Faction for the Terminator Chaplain in Warhammer 40K

In this article we are going to look at what Space Marine faction will best suit the new Terminator Chaplain in Warhammer 40K model, due for release on the 31st October. This fantastic new figure is being released in celebration of Warhammer day. It will be available across the world, both online and in Warhammer stores. I cannot wait for this model; it’s going to make a great addition to my Space Marine force! Previously the character we reviewed was the Primaris Techmarine.

Chaplains are their chapters spiritual authorities and indomitable warrior priests. Caring for the for the spiritual wellbeing of their fellow battle brothers in the chapter. They are also known for their faultless knowledge of their chapters rites, catechisms and liturgies. You will find chaplains leading from the front on the battlefield, reciting litanies of death while smiting the enemies of the imperium with their Crozius. Their actions inspiring the battle brothers fighting alongside them to righteous fury, laying waste to all in their path.

Why field a Chaplain on the Tabletop?

In the lore, chaplains are righteous warrior priests striking down all in their path. On the tabletop chaplains are excellent HQ choices from the new codex Space Marines. They are solid combat characters who can hold their own against some of the most vicious enemies in the game. They also bring with them solid buffing potential in the form of their litanies. Chaplains have access to seven litanies to pick from pre-game:

Each of these litanies offers a valuable ability to your army. Each chaplain can chose one pregame to use in the coming battle each command phase

We can’t talk about Chaplains without discussing the chapter command upgrade “Master of Sanctity”. This upgrade allows you to make one chaplain in your army take two litanies over one whilst also giving access to a good relic and an excellent warlord trait for Chaplains. If you are taking only one chaplain in your force, I would always upgrade them to your master of sanctity.

What is the best chapter for your Terminator Chaplain?

With 14 chapters to choose from, there is a lot to consider when choosing the best chapter for the new Terminator Chaplain in Warhammer 40K model. However, its safe to say there is a clear winner when considering the benefits of each chapter for this model, and our winner is……

The Dark Angels! The loyal sons of Caliban have two specific points which make them stand atop the competition for best chapter. First, their chaplains come with the “Inner Circle” keyword. This specific keyword, when applied to infantry models, means that the terminator chaplain cannot be wounded on anything less than a 4+. That’s right, your terminator chaplain is will spend the entire game walking around with the effects of transhuman physiology for free! This is an incredibly good rule and you get it for free! This effect in a stratagem would cost you 1cp per phase they take damage. That’s a potential 10cp in a 5-turn game, I cannot overstate how good this is!

This brings us to our second point. Dark Angels get access to a special type of chaplain known as Interrogator chaplains. These can also be equipped with terminator armour and you should 100% be using this new terminator chaplain model as an Interrogator chaplain. For only 5pts more base cost you gain +1 attack, +1 wound and an additional data sheet ability, Aura of Dread. This ability counts enemy units within 6” of the chaplain as under half starting strength. While not an obviously powerful ability, this can help remove casualties when enemy units fail morale within range. It pushes the attrition test to fail on a 1 or 2, increasing the number of dead models by 16.67%. For 5pts, you should never not take this model as an Interrogator chaplain.

Even though Dark Angels were the clear winner, this doesn’t mean that the chaplain would be a poor choice in other marine chapters. Space wolves with wolf guard terminators backed up by the terminator chaplain would be excellent. This combination could make use of the +1 to wound in shooting litany and combi-plasma spam. Grey knights really benefit from the inclusion of terminator chaplains in their forces. Their unique litanies are a real asset to a GK force and help shore up certain weaknesses in a GK army. Finally, white scars having one deep strike in turn 2 close to front lines and using the commanding oratory stratagem. Using their unique litany for reroll wounds in combat will really ramp up the damage output of your close combat units.

That’s it for now, let me know your thoughts on the best chapter for this model. If you don’t think its Dark Angels I’d love to hear which chapter you think it is and why!

The post The Best Faction for the Terminator Chaplain in Warhammer 40K appeared first on Nights At The Game Table.

The Best Faction for the Terminator Chaplain in Warhammer 40K