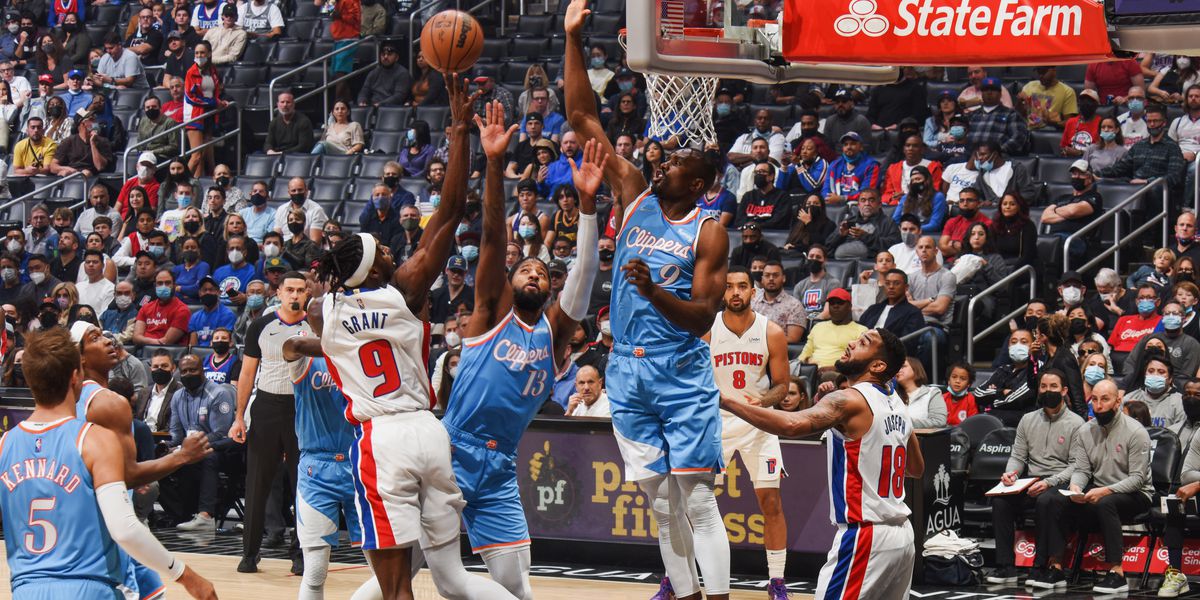 Make that 2-0 in the City Edition jerseys.

Ever since Serge Ibaka returned from his back injury, the question was always if the Clippers would opt for a two-center look, especially with their forward depth of Nicolas Batum, Kawhi Leonard, and Marcus Morris Sr. compromised with various ailments and injuries. To date, though, Ty Lue had been fairly adamant in his opposition to such a lineup.

However, against the shooting-challenged Detroit Pistons, Lue finally acquiesced, playing Ibaka and Isaiah Hartenstein together for sustained stretches. The debut of the two-center frontcourt was arguably the biggest draw in an otherwise dreary matinee game the day after Thanksgiving, when the Clippers put together a strong first half and then coasted to a 107-96 victory.

Lue got Ibaka and Hartenstein in together during the usual bench stretches rather than use Justise Winslow or Amir Coffey, as Nicolas Batum remains in the health and safety protocols. The pairing looked a little lost together. Defensively, they both instinctively protected the paint instead of rotating out to shooters. Offensively, both often tried to occupy the same spaces on offense — to be expected, since they presumably both play center during practices.

But Hartenstein’s passing and Ibaka’s shooting helped open up a couple of pockets of space, and lineups with the duo were only outscored by three points in their 11:22 together.

The Clippers were able to build up a big lead and experiment with that pairing in part thanks to a strong start from Eric Bledsoe. The point guard hit his first three 3-pointers and had 11 points in his first shift. He ended with 15, which equaled his total from the last four games.

Lue made a note pregame that he needed to get Bledsoe in more situations where he could be aggressive. Bledsoe got in an early pick-and-roll with Ivica Zubac, and also flared out of some high screens with Paul George and made himself available for catch-and-shoots.

The team didn’t get particularly efficient performances from any of the best shooters, as George shot 5-of-19 from the field, Reggie Jackson was 8-of-19, and Luke Kennard was 2-of-10. But Bledsoe had his 15 on nine shots, Terance Mann had his fifth career double-double with 16 points and 10 rebounds, and the centers tallied 29 points and 20 rebounds.

The defense carried the Clippers, as they limited the Pistons to 62 points on 32.8 percent shooting through three quarters. Detroit got on track in the fourth, scoring 34 and requiring the Clippers starters to come back in, but the Pistons couldn’t get within single digits after trailing by 24 at halftime.