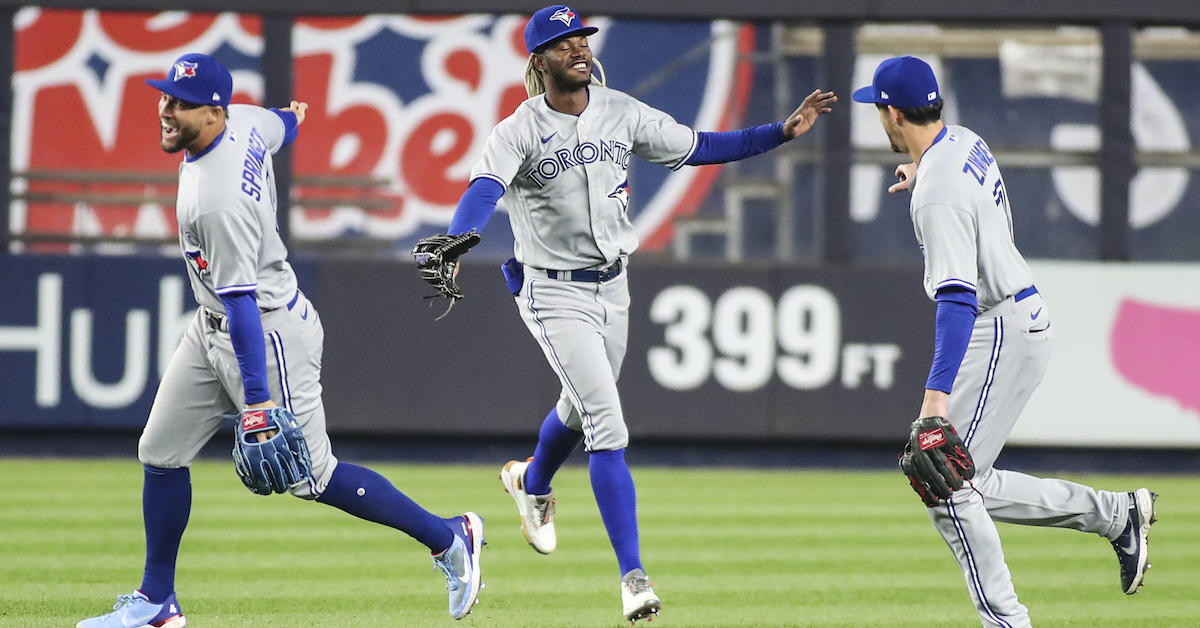 It’s a fun time to be a Blue Jays fan. (Well, Tuesday night’s loss to the Yankees notwithstanding.) Vladimir Guerrero Jr.’s titanic home runs are fun, George Springer’s diving catches are fun, and Kevin Gausman’s wicked splitters are fun. Basically, the entire team is a blast to watch. To a casual fan, Toronto must look like the best baseball has to offer. And to a serious nerd like myself, Toronto also looks like the best baseball has to offer — in one specific regard, that is.

Here at FanGraphs, I’ve written extensively about the shift. It’s a subject I’m passionate about not only because there’s a lot of room for analysis and debate, but also because teams seemingly never agree on how to use it, and dissent is entertaining. The Padres only shift against left-handed hitters. The Dodgers shift against everyone! Last season, it looked like teams started to cut down on shifts against right-handed hitters. This season, they’re more popular than ever. And if there’s a protagonist in the latest (and potentially last) story surrounding baseball’s grasp of the shift and all its variations, it’s none other than the Toronto Blue Jays.

I’m hardly the first to take note of this. Summarizing the season’s first weekend, Mike Petriello wrote about how the Blue Jays were shifting against everyone. Emma Baccellieri covered the continued rise of infield shifts and how Toronto has been leading the charge. In addition, what follows isn’t anything groundbreaking. These observations have been made before, but they bear repeating because they’re ridiculous. It’s as if the Blue Jays are participating in an entirely different game. But if we just look at the most common variety of shifts, the ones against lefties, there’s nothing all that special to be found: A quick note on this graph and those ahead: they display volume and not rate, making them inaccurate in judging which teams are the most and least shift-enthusiastic. For example, while the Yankees are 29th by number of shifts against lefties, they’re 23rd by shift rate, simply because their pitching has faced a league-trailing number of left-handed hitters. But for the purposes of this article, using each team’s total seemed like the best option. You’ll get to see why later on.

Getting back to the point, the Blue Jays are around the middle of the pack when it comes to shifting against lefties. They follow a rare shift-related consensus but not overly so, which is that most left-handed hitters are good shift candidates. Why? Compared to right-handed hitters, lefties pull a higher rate of groundballs and tend to strike out more often when faced with the shift. A standard lefty alignment also leaves considerably fewer holes in the infield. Even the most conservative teams are shifting way more against lefties than they did some three or four years ago.

In that sense, the Blue Jays are moderates. But not for long, because this is where things kick into overdrive. While all teams have shifted against a righty at least once this season, extremists are few and far between. That’s because those righties are a risky bunch; they don’t pull as many of their grounders and strike out less often against the shift. A standard righty alignment can cover the pull side, but any ball hit even slightly the other way has base hit potential. Most teams prefer to focus on the lefties. The Blue Jays, though? They simply do not care: What’s fascinating is just how fast the Blue Jays came around to the idea of targeting right-handed hitters. They shifted against righties in 11.3% of opportunities last season, a rate that has skyrocketed to 66.4% this year. Some time during the offseason, the Jays’ front office folks pondered the possibility of this, ran the numbers, and arrived at the conclusion that it is indeed viable. I have no idea what sort of revelations led to such a rapid shift in philosophy, and from the outside looking in, they seem bonkers. Public research suggests that shifting against so many righties is a bad idea. But evidently, certain teams are arguing otherwise. The Blue Jays, beyond joining them, are now spearheading their campaign.

Teams aren’t only paying attention to their infield defense, however. As both Rob Arthur and Russell Carleton have detailed, outfield positioning has had a far greater impact on hitter BABIP than infield shifts, which receive the bulk of the sports media spotlight. One method teams use to snag hard-hit line drives and fly balls is shading the centerfielder to the right (versus lefties) or the left (versus righties). Hitters also tend to pull their air balls, and it’s those pulled balls that are the most dangerous. Labeled as a “strategic” outfield on Baseball Savant, it’s subtle, effective, and has spread across the league. Let’s see where the Blue Jays stand in terms of usage: There’s not much to add here. The Jays are once again in first place, and this time by an even greater margin. They alone have accounted for 16% of all strategic outfields this season. Since these outfield shifts happen concurrently with infield ones, it’s pretty much never the case that Toronto’s defense is normal. Regardless of your feelings about the shift, you kind of have to applaud this dedication, right? Oh, and the Blue Jays are also connoisseurs of the four-man outfield, which few teams attempt due to the risk involved. It’s certainly an acquired taste, but the Blue Jays have a voracious appetite: This graph isn’t missing any values — there really are only six teams thus far who have dared to place four men in the outfield. Fittingly, the Blue Jays’ total is greater than that of the five other teams combined. It’s interesting how among the six, four of them are AL East teams. That’s partly because of Joey Gallo and Anthony Rizzo, two Yankees who rank first and second in most four-man outfields faced. But what separates the Blue Jays is their relentlessness. Rather than reserve four-man outfields for extremely specific situations, they’ve been keen on using them against select hitters without consideration for the opposing pitcher or count. They aren’t just dipping their toes in the water; they seem fully committed. A bunch of teams squished together, with one Toronto skyscraper towering over them. That graph perfectly encapsulates why the Blue Jays have been so unbelievable this season. The players are good, sure, but from a front office perspective, this is also what a desire to win looks like. Not that a maximalist approach is necessarily good, but the Blue Jays sure seem convinced that more than 4,000 shifts and counting are an integral part of their formula. They’re all in! That can’t be said about a lot of teams.

What I’m not going to do here is try and figure out what their reasoning is, and if it really is sensible. That’s maybe an article for later — no math this time. The Blue Jays’ aggressive ways do give us plenty of questions to consider, however. Did their acquisition of Matt Chapman encourage them to push the limits of what’s possible in the infield? Does the spacious outfield of Rogers Center give them an incentive to cover extra ground? Or have they somehow found a way to nullify the walk penalty? For now, though, I’m content with stepping back and admiring their efforts. If the shift does becomes a relic of baseball’s past, we’ll always have the 2022 Blue Jays to remind us how far it was taken.