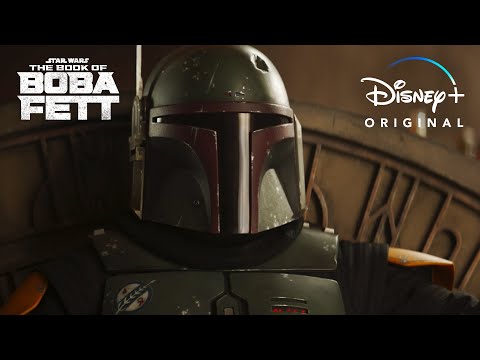 A brand new promo for The Book of Boba Fett hypes up the return of the iconic Star Wars Bounty Hunter.

After over a year off, Star Wars fans will return to the iconic galaxy far, far away in live-action form with the upcoming new series The Book of Boba Fett, the first official spinoff series from The Mandalorian. Now, we got a brand new promo building up the legendary character.

This new promo, titled “Reign” gives fans another glimpse at the criminal underworld of the Star Wars universe. Given that the season 2 finale of The Mandalorian concluded with Boba Fett taking the throne in Jabba’s Palace, it’s safe to say that he is going to be taking charge in more ways than one. You can check out the new promo for The Book of Boba Fett down below:

The Book of Boba Fett will be the beginning of what looks to be an exciting year for Star Wars on Disney Plus. In 2022, along with the release of this new series, Obi-Wan Kenobi, Andor and the third season of The Mandalorian will be available to stream on the service. It’s safe to say that the future for the franchise is quite bright in the television sphere.

Here is the synopsis for the upcoming Star Wars series, The Book of Boba Fett:

The Book of Boba Fett, a thrilling Star Wars adventure, finds legendary bounty hunter Boba Fett and mercenary Fennec Shand navigating the Galaxy’s underworld when they return to the sands of Tatooine to stake their claim on the territory once ruled by Jabba the Hutt and his crime syndicate.

The Book of Boba Fett will arrive on December 29 on Disney Plus. Stay tuned for all the latest news on the future of the Star Wars franchise on Disney Plus and the big screen. You can also subscribe to Heroic Hollywood’s YouTube channel for more original video content!

The post ‘The Book Of Boba Fett’ Promo Hypes Up The Return Of A ‘Star Wars’ Icon appeared first on Heroic Hollywood.