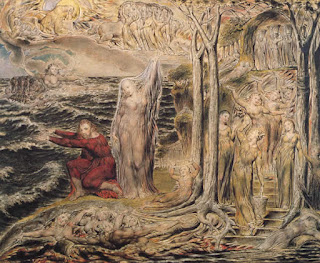 The Cave of the Nymphs

The Neoplatonist philosopher Porphyry wrote a commentary on a scene in Homer's Odyssey that offers a remarkable allegory of the soul's comings and goings from embodiment in this world. A translation of Porphyry's text, new to the English language at that time, inspired William Blake to paint a picture full of codes for the awakening spirit.

For  Porphyry the Cave of the Nymphs is a “harbor of the soul”, a waystation between the worlds. Porphyry insisted that nous (mind, spirit) is never contained in the body, but only “acts in it” through affinity or gravitation. An affinity for what is moist and humid brings souls back into incarnation; a tendency towards what is dry and light and fiery carries the soul into the realms of the immortals. In the Cave of the Nymphs, Naiads (spirits of fresh waters and fountains) weave “moist envelopes” – “purple tissues” – on stone, and bees deposit their honey in stone urns. Images of taking on flesh, of coming into generation.

The word-picture fascinated William Blake, who gave it visual form in a watercolor painting found only in 1947 in the clutter atop a cabinet in a stately home in . The first experts to examine the picture decided to give it a title from one of Blake’s letters: “The and Space”. Kathleen Raine explains in fine detail that the picture is an illustration of the Cave of the Nymphs. It seems that Mystery rituals dedicated to Odysseus and the Naiads – and the soul? – were actually held in a cave near the in where Odysseus is said to have returned to his homeland, dreaming.

Kathleen Raine discusses Blake's imagery in an essay in her book Blake and Antiquity. She finds ithat even with self-taught, self-driven Blake, it is true (as Yeats declared) that poetry is “the traditional expression of certain heroic and religious themes, passed on from age to age, modified by individual genius, but never abandoned.”

In 1947 a stately home in called was taken over by the National Trust. Among broken glass and junk on the top of a pantry cover was found a painting by Blake clearly dated 1821. The art experts provisionally titled it “The Sea of Time and Space”, after a phrase in one of Blake’s letters and in his poem “]. Its actual nature – as an illustration to Porphyry and Homer – was not recognized for a long time because of the tendency to regard Blake as an “untaught original” rather than an autodidact who devoured and integrated huge bodies of literature. The symbols appear again and again in Blake’s own work, yet we see that they also have deep roots in mythic experience and Neoplatonist tradition. For Raine,

Neoplatonism may be compared to an underground river that flows through European history, sending up, from time to time, springs and fountains; and wherever its fertilizing stream emerges, there imaginative thought revives, and we have a period of great art and poetry. [1]

Blake was a contemporary of Thomas Taylor, who brought the Neoplatonists into the English language (and was often ridiculed for it). was a crusader for the philosophy of Plotinus, calling on the young men of his time to take up its “weapons of truth”. He published the first English translation of Porphyry’s De antro nympharum.

Blake's picture gives s nymphs, weavers at a loom, a sea-god, souls entering incarnation, bright spirits reborn -  perpetual cycle of the descent and ascent of souls between an eternal and a temporal world.

In Mystery traditions, the  voyage of Odysseus in its entirety was read as the type of such a journey of soul. The sea, in constant flux, is the world. The watery is the world’s enchantments. The beggar’s rags in which Odysseus returns home are the body, which the soul discards when they are no longer needed. The sea crossing, as in many legends and myths, is the type of the soul’s journey to the Otherworld.

Blake incorporates the image of Odysseus throwing something out to sea, his face averted. This borrows an image from Book V of the Odyssey where the  hero is washed up on the Phaeacian shore. Odysseus is the soul survivor of the wreck of his ship; the goddess Ino takes pity on him and lends him her girdle, urging him to swim to shore. When he lands he must throw her girdle back to her, turning his face away. In Blake’s painting, the hero has thrown the girdle; the goddess has caught it, and she is dissolving back into a spiral of radiant cloud.

Athena stands behind Odysseus, a figure of Divine Wisdom, pointing to the shining realm of the sun.

Things to look for in Blake's painting:

The source of life in the underground river or spring.

The dry and the moist. Heraclitus sas “a dry soul is the wisest” although “moisture appears delightful to souls”.

Womb and tomb: Birth into the cave is a death from eternity. The Cave of the Nymphs is the womb through which humans are born into the physical world.

Bowls and urns: Blake shows them carried like water pots on the heads of winged nymphs in the depths of the cave.

Bees: These winged nymphs are Porphyry’s bees, winged souls about to descend into the cave of the world through womb-like vessels.

Weavers: Blake has borrowed from his own Daughters of Albion, who ply their shuttles to bind immortals into mortal bodies. In Homer, there are marble looms and purple garments. Porphyry’s gloss is that “the formation of the flesh is on or about the bones, which in the bodies of animals resemble stones.” There is a hint of cruelty in the faces of the weavers.

The child enmeshed: To the right of the looms, in Blake’s image, a little girl is enmeshed in what the nymphs are weaving – she is being woven into a body.

The tubs: borrowed from Porphyry (who in turn borrowed from the Gorgias and Hesiod): the tub or bucket of the evolved, temperate and “dry” soul that is intact and can hold its contents, and the one of the person ruled by passion that is pierced and spills everywhere. Seen in two figures in the right foreground of Blake’s painting: a resolute woman turns her back on the swirl and climbs the steps, holding a bucket in her right hand while her left is raised towards the heavenly world. She is opposed by the nymphs. Close to her, a “moist soul” lolls half-immersed in a tub which lies on its side, forever spilling and unfilled even as water streams into it; she looks happy but she disgusts Blake, because she is caught in the “deadly sleep” of physical life and is on her downward journey.

The river’s mouth: the lowest stage of descent into matter in Blake’s painting. Here he introduces Fates who control the entry of souls into the and Space. Savage and cruel, one unwinds the thread, a second measures it, a third waits with shears to cut it off. Phorcys (who Raine sees as a variant of Proteus) bears the phallic distaff from which the thread is unwound.

The sleeping sun god – when this world wakes, the other world sleeps.

1. Kathleen Raine, "The Cave of the Nymphs" in Raine, Blake and Antiquity: The A.E. Mellon Lectures in the Fine Arts (Princeton N.J.: Bollingen, 1977) 4

The Cave of the Nymphs