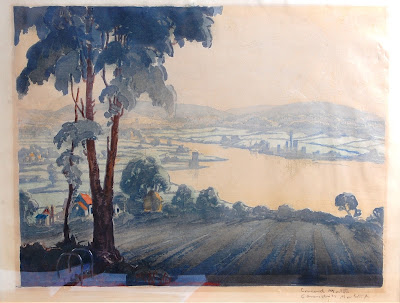 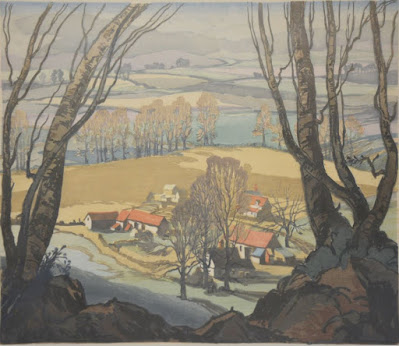 The colour woodcuts made together by the twin brothers, Concord and Cavendish Morton, in the early 1930s account for only a small part of their careers as artists but nevertheless were a diverting excursion into self-promotion master-minded (I assume) by their resourceful father. Cavendish senior had been an actor and set designer who had moved into the fashionable field of theatrical and portrait photography. Like so many people with artistic talent, he had firm but unusual views about education (at least so far as his two sons went) and instead of putting them through the usual rigmarole of private schools and famous universities, the boys were sent off to train with shipwrights, wheelwrights and colour grinders at the Royal Naval Dockyard and Camper & Nicholson shipyard at Portsmouth. 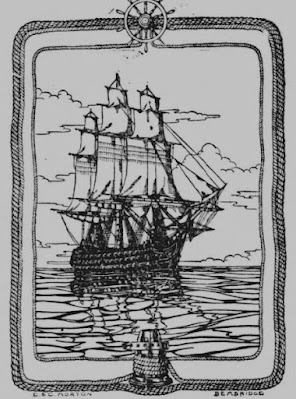 This had all been made possible after the family moved to Bembridge on the Isle of Wight in 1924 and following the stint at Portsmouth, the pair were sent off to help building a fishing boat on the foreshore at St. Ives. Nevertheless none of this helps to explain how the pair of then could produce a card of such originality as the one above made for Christmas 1929. At this point, they were both twenty-eight so Christmas cards could only have been a side-line but from what I can tell (and you must judge for yourself) the boys undertook a further period of apprenticeship. Below is what looks like their earliest colour woodcut. So far as I am aware there was no edition and the print may have only survived because it remained in the collection of Yoshijiro Urushibara and eventually came back to Britain from Japan when the collection was sold. 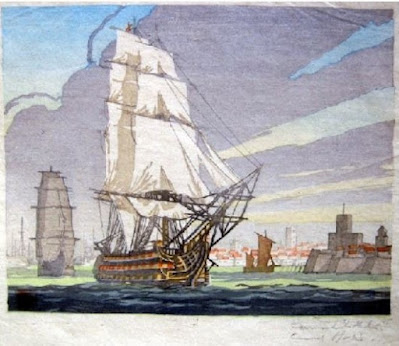 The woodcut depicts H.M.S. Victory off the fortified shore at Southsea with the great naval dockyard in the background to the left and Portsmouth to the right and so far as I am concerned this is the most telling of the half dozen or so colour woodcuts they produced. The Mortons went on to specialise in rhapsodies and although the later prints were all more competent than H.M.S. Victory, none had the same winning combination of elements. Seamanship, landscape and history together take this woodcut out of the commonplace and prove perhaps that father had been right when he had had his sons educated together in the way that he did. Readers will also understand that this neatly leads me into one of my pet topics, namely the extent of the effect Urushibara had on British colour print making. I think it was considerable and I strongly suspect the refined printing sense and sense of atmosphere depend largely on the Japanese artist.

Beyond that the trees in the foreground of Arreton Farm (top) have the broad muscularity we associate with Frank Brangwyn. More subtly, the partnership between Brangwyn and  Urushibara was repeated in the unique enterprise undertaken by the twins and unusually in 1932 the Graver Printers in Colour broke their own rules once again and allowed collaborative work to be exhibited at their annual show in London. Surprisingly, Catspaw, Cowes remains untraced to this day. The seafaring theme was continued with Scrapped. (The Emperor of India) which went into the collection at the British Museum. I have to been able to find an image of that print either so we are left with the landscapes they made between 1933 and 1938, including Medina valley (or Medina factory) (above) and Spring rhapsody (below). 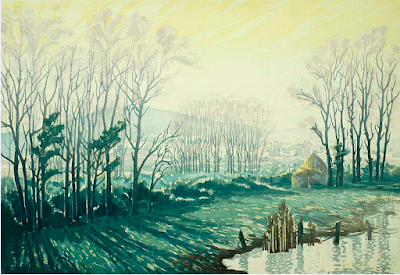 Both prints depend heavily on a loose watercolour style that again puts me in mind of Urushibara's translations of Brangwyn' work. With the Mortons we should never let the detail get in the way of appreciating the overall tone and luminosity. I regret not buying one of their woodcuts I found for sale at Bath antiques market many years ago. Probably the price of £50 might have put me off but it was probably more the overall impression. Despite the stunts they got up to and despite having such a theatrical father, the pale colours and lack of focus was wrong for colour woodcut. It needed something bolder. On the other hand, when the Commodore Cinema was built at Ryde on the Isle of Wight in 1936, our two boys were engaged to provide a nautical touch to the decoration, including disguising the box-office as the stern of an eighteenth century battleship. Frankly, this sounds more to my liking than rhapsodies and coupled with the chance to have tea at a place in Southsea decorated by the irrepressible twins, it sounds to me like the perfect day out. Predictably I have seen neither. I have never discovered the name of the tea shop though I have visited Southsea and the Commodore stayed open until not that long ago. Whether the box-office was still afloat I cannot say. When you are next down that way, please try and find out. I get the feeling that decoration was what they did best.