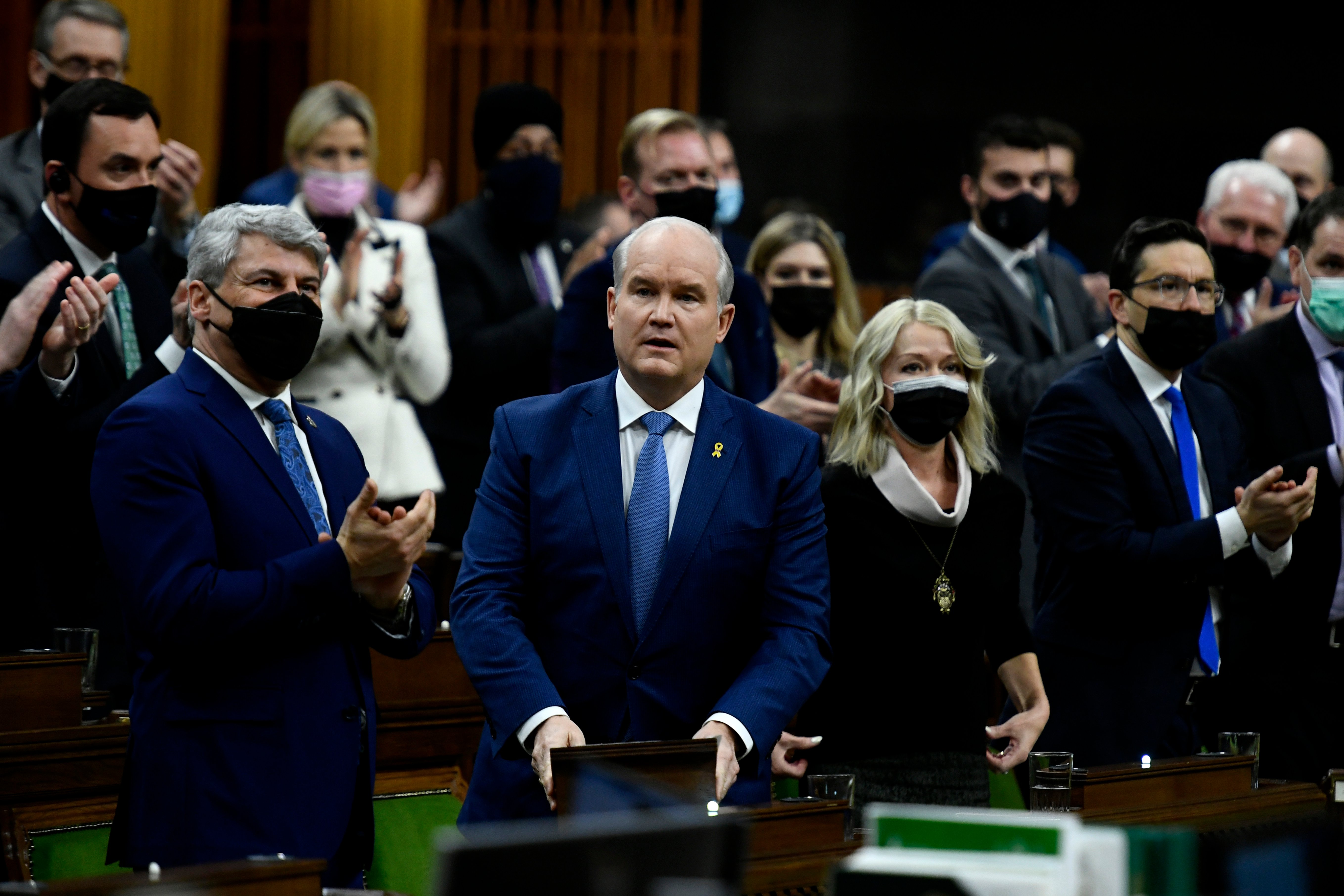 The Conservative revolt has begun

There is a Conservative caucus revolt underway, and Paul Wells has been talking to one of the MPs who wants Erin O’Toole out. That unnamed MP believes anyone would be better.

Replace O’Toole? With whom? “I don’t think it matters. To me it doesn’t. Anything would be better than this. I’m to the point of preferring a name drawn out of a hat.”

Why? The “straw that broke the camel’s back,” this MP said, was “the ham-fisted response to this trucker convoy.” The Conservative leader spent last week and the weekend looking for an attitude in response to the arrival of thousands of protesters in the nation’s capital: from studied incomprehensibility to assorted shades of support and concern.

Wells gives us a quick history lesson, reviewing the “east/west, insider/outsider shimmy” of Conservative politics in recent decades, although an infusion of Trumpism makes it hard to figure out what will happen this time.

35 names: The Globe broke the story Monday night. Thirty-five MPs have signed a letter seeking a caucus leadership review vote, which could happen as early as Wednesday’s caucus meeting. Sources tell the Globe that “at least 63 MPs of the elected 119 Conservative members” are ready to vote against O’Toole. An O’Toole supporter in caucus tells the Globe, though, that most MPs support him. There have apparently been a lot of phone calls.

Conservative Party Whip James Bezan made calls Sunday and Monday to dissident MPs, warning of repercussions if they tried to oust Mr. O’Toole, according to the sources.

In the open: Calgary MP Bob Benzen, who supported O’Toole in the 2017 and 2020 leadership races, tweeted a letter calling for a review, pointing to disagreements over a carbon tax, firearms laws, English language rights in Quebec and pandemic restrictions: “I believe a caucus leadership review is the only way to prevent a dangerous split in the Conservative Party that may not be repairable.”

Revolt: O’Toole’s camp responded by telling CBC’s Travis Dhanraj that Saskatchewan MP Garnett Genuis was organizing the caucus revolt over a conversion therapy vote, and that Andrew Scheer wants to be interim leader. Genuis took to Twitter to deny that and insist that O’Toole has to go.

Still walking: Tasha Kheiriddin, with a quick column in the Post, pronounces O’Toole a “dead man walking,” and she points to the role of the convoy.

After this weekend’s protests in Ottawa, one can’t say it’s a surprise. Conservative MPs Pierre Poilievre and Leslyn Lewis were working the crowd all weekend, giving coffee and sympathy to protesters and yammering about “freedom” until their vocal cords gave out. They were basically kickstarting their respective leadership campaigns, sticking the knives in O’Toole so fast it’s a wonder he hasn’t bled out on the floor.

On Sunday, the two even got an endorsement. Organizers of the protest said O’Toole should quit and be replaced by Poilievre or Lewis. “If they were smart, they would pull Erin now. Right now. Get him out of there,” said spokesman Benjamin Dichter. “We all think that Pierre resonates with the vast majority of Canadians in his opposition to Justin Trudeau.”

Convoy talks: Meanwhile, in Ottawa, Police Chief Peter Sloly said Monday that his force is talking to the anti-mandate protesters who have shut down much of downtown Ottawa, CTV reports: “All options are on the table, from negotiation through to enforcement.”

Afraid of violence: Earlier, Mayor Jim Watson said the threat of violence had been too great to force protesters to leave, CBC reports: “I asked … why you can’t start ticketing [on Queen Elizabeth Driveway], it’s far enough away. And they said they’d get on their CB [radio] and there would be another 20 truckers there smashing down the barricade.”

Fed up: Many downtown restaurants have closed their doors, the Citizen reports. “It’s chaos down there, wall-to-wall trucks, and the noise is unbearable,” Anthony Bailey, owner-operator of Toro Taqueria on Bank Street.

Please go: In a column in the Star, Robert Hiltz expressed his frustration with the situation: “How can you sympathize with the cause of people who will throw rocks at paramedics; who will impose their vision of maskless freedom on a mall full of people who just want to do their jobs?”

Social panic? In the Post, Jonathan Kay writes that people are overreacting: “The last few days have provided an instructive spectacle — a microcosm for the larger, profoundly off-putting phenomenon by which progressives lazily default to labelling anything they dislike or disagree with as a manifestation of bigotry.”

Stereotypes: The Post also has a sympathetic column from Rupa Subramanya, who found the protest more diverse than media coverage would have suggested:

One myth that was busted right away was the striking diversity of the protestors starting with the two main organizers, Benjamin Dichter, who is Jewish and Tamara Lich, who is Metis. Far from being a uniformly disgruntled group of white Canadians, not that there is anything wrong with being that, one saw Indo-Canadians, Arab Canadians, Chinese Canadians, Black Canadians and just about every other ethnic Canadian under the sun.

Won’t back down: Parliament resumed on Monday, and Justin Trudeau, who is isolating with COVID, had a news conference to say that he would not yield to the protests, CTV reports: “I want to be very clear, we are not intimidated by those who hurl insults and abuse at small business workers, and steal food from the homeless. We won’t give in to those who fly racist flags. We won’t cave to those who engage in vandalism or dishonor the memory of our veterans.”

Ford speaks: Doug Ford also spoke against the excesses of the protest, the Star reports: “I was extremely disturbed, however, to see some individuals desecrate our most sacred monuments and wave swastikas and other symbols of hate and intolerance this weekend. That has no place in Ontario or Canada. Not now. Not ever.”

Opinion shifts: Politicians are speaking against the protest, but there are indications that Canadians may agree that it is time to ease restrictions. The Toronto Sun has an Angus Reid poll showing “54% want restrictions to be lifted compared to just 39% who wanted restrictions lifted when the same question was asked two weeks earlier.”  And an Innovative Research poll finds 46 per cent opposed to the protest while 31 per cent support it, which would be significant, given the largely negative media coverage.

Northern tea? In the Globe, smart professors Amarnath Amarasingam and Stephanie Carvin wonder whether the convoy movement will morph into a Tea Party-style populist movement.

If many different actors claim success and seek to push the movement in competing directions, it will ultimately be unable to frame itself around a coherent narrative. Additionally, it may be abandoned by those who simply took the opportunity to express anger and frustrations as we enter year three of the pandemic.

Clear the road: Meanwhile, in Alberta, RCMP have decided that a border blockade is “no longer lawful and resources are in place to make arrests and tow away vehicles if they are unable to resolve the conflict,” CP reports.

Au bout de nos jours: Legendary Quebec singer-songwriter Gilles Vigneault, 93, announced Monday he is also removing his music from Spotify, joining Neil Young and Joni Mitchell, who recently denounced the firm for spreading misinformation, CP reports: “I find Neil Young and Joni Mitchell right to set this example and it is as honourable as it is relevant to follow them in their rejection of the dangerous falsehoods professed by theorists of rampant populism.”

The post The Conservative revolt has begun appeared first on Macleans.ca.

The Conservative revolt has begun