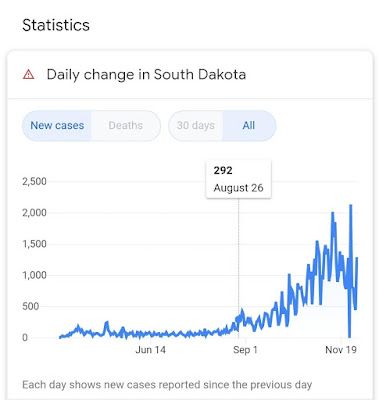 The Curious Contradictions of Trump Supporters on Coronavirus 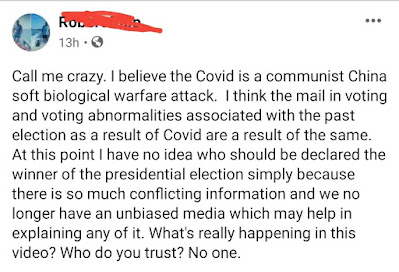 The guy who inspired my previous post about his desire to execute all Democrats for treason appeared in the comments section of the Facebook post above, which shares a sentiment I have heard expressed often, which is that the Coronavirus epidemic we have been experiencing is due to deliberate biological warfare waged by the People's Republic of China.

Let's pretend for the sake argument that it is true, China did this to us on purpose.  Then, if you are a die-hard America First Trump supporter, wouldn't it make absolute sense to do everything possible to limit the spread of virus so that it infects fewer Americans?   Like wear masks?  Engage in social distancing?

For example, for reasons not entirely clear to me, motorcyclists are often represented as stalwart patriots who love America more than the average America citizen.  I don't know why, maybe because they like to sport American flag patches or fly flags on their motorcycles?  Wouldn't it be expected then that they would want to be in the vanguard of combating the "Chinese Virus"?  One way they could do that would be to agree to cancel the annual motorcycle rally held in Sturgis, South Dakota, where tens of thousands of them converge every year from all across the country, so as to prevent the state from turning into a coronavirus hot spot and then carry the virus back with them to their hometowns.  Nah, who am I kidding?  Many thousands of them decided it was more important to celebrate their freedumb, excuse me, freedom, by attending the gathering this past August.  A look at the graph chart below illustrates better than words could what happened next.

If memory serves, the rally ran from August 9 to August 21, and as you can see, not long after that, South Dakota's daily new COVID cases exploded.  And it was all preventable if the so-called patriots of America had exercised some self-restraint to fight the Chinese Virus.
Another contradiction I see from Trump supporters on Facebook is that on the one hand, they argue that concerns about Coronavirus are overblown because only 1% of people who catch it die from it, or they latch onto the misinterpretation of the findings that 94% of COVID deaths were from people who were already in ill health from other diseases, etc., but on the other hand they claim that Trump's China travel ban saved the lives of millions of American citizens.  But wait a second, if the mortality rate is so low, then even in the absence of a travel ban, hardly any more people should have died from it then did so with the travel ban.
Apparently Trump being consistently wrong about Coronavirus hasn't shaken their faith in him either.  Here is a comment dating sometime late March or early April from a Trump supporter who frequently comments on one of my anti-Trump friends Facebook posts.  This guy clearly only believed it at the time because it echoed what Trump was saying at the time, and because this guy would often claim "I trust Trump."

And here are Trump's classic "it may not come back at all in the fall" comments from the April 22 White House Coronavirus briefing.
In the same briefing, Doctor Fauci insisted that it would come back in the fall.  As I like to say, one of them ended up being right and the other one ended up catching Coronavirus in the fall and having to go to the hospital for treatment.  Of course, Trump supporters still stand by their president and deride Fauci as an idiot.  Go figure.
Source: anexerciseinfutility

The Curious Contradictions of Trump Supporters on Coronavirus