There’s so much fear out there in the Market now—but fear, like euphoria, only lasts for awhile.  The Market gives and takes—it’s just hard to figure out how much time each swing will be.

I’ve made a lot of money over the last 15 years following Nathan Weiss of Unit Economics, out of Rhode Island.  It’s an independent research firm for a limited number of institutions (and me). Weiss’s ability to use hard data to back up his market thinking is somewhat unique.

Last week he laid out what he sees as a probable scenario for North American markets for the next 15 months.

Key to his thinking is understanding how and why The Fed reacts to the economy—and reacts is the key word.  Weiss is a big believer that investors have a bit of a mistaken view of how The Fed and the Market work.

He says the Fed prepares itself to be reactive—it is not proactive.  Interest rates were low for a long time so they could raise them when inflation got too hot—like now.  And the Fed will keep rates high as long as they can to have lots of ammunition to lower them when the economy cools off—which he doesn’t expect to happen in a big way until the second half of next year, 2023.

So while many investors may cheer The Fed lowering rates late next year and think that will be good for the Market, Weiss believes the opposite—it will be a sign that a potentially long recession is looming.  He put together this historical chart that outlines quite clearly that recessions happen (the grey bars in the chart) as the Fed LOWERS rates:

Of course, The Big Question everyone is asking is—well, when will The Fed stop raising and start lowering rates?

Weiss has looked at the history of the ups-and-downs of The Fed on interest rates, and says while there is no specific date in mind (though he has one!!), there is a good range to go by.

He says market history suggests The Fed ‘pauses’ are generally short-lived–since 1990, an average of 10 months from the final hike to the first cut with a range of 4 to 17 months. And again, investors should be careful what they ask for because this pause could ultimately be negative for equities.

So when does he think interest rate increases end and The Pause starts?

“My best guess is the January 31st  – February 1st Fed meeting will mark the last rate increase, making March 21-22 the first ‘unchanged’ meeting,” he told me this week.

And here is his back up:

Taken together, retail sales declined slightly in July+August.  See the far lefthand column—it is showing the beginnings of a come down in inflation. 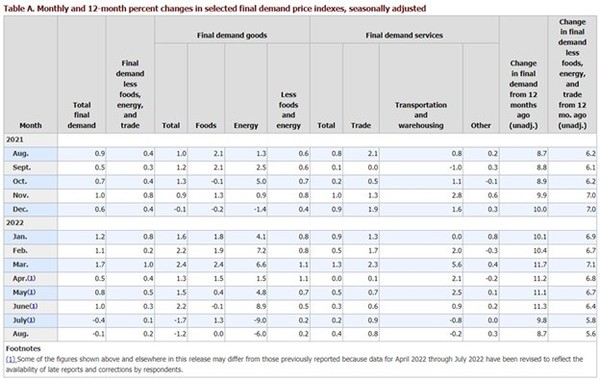 Those are hard numbers.  He points that rents are The Big Culprit in inflation, and everything else—energy and food in particular—is coming down.

Now, moving into extrapolating this data forward—and Weiss admits that is tough to do more than a couple months ahead at any time, much less a volatile one like this—he says if CPI comes in at +0.1% sequentially every month going forward, the monthly YoY CPI readings would be as follows: 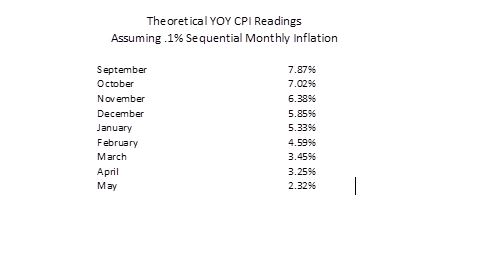 Now, if you bump that up to .3% sequential monthly increases after November, the trajectory of YOY CPI inflation would be as follows:

So he is thinking in the low 5% range for CPI readings, The Fed pauses its interest rate increases.

How do stocks respond to this, assuming this is what happens?

“But then a substantial rally comes in the first half of 2023, particularly for bonds. In the second half though, it will become apparent Fed policy is too restrictive, especially for housing, capital investment and exports, all due to the strong US dollar.  And I think labor markets will remain too tight for sustained economic growth above potential.”

Now, a strong labor market does not imply that the economy is OK—another big misconception, says Weiss..  First off, the highest unemployment usually happens at the END of a recession (much like the best business conditions happen immediately BEFORE a recession).

“The loss of consumer CONFIDENCE launches recessions, the loss of EMPLOYMENT comes later,” he  says. “And most people struggle to believe recessions START with very low unemployment and unemployment typically peaks 12 to 36 months after the END of the recessions.”

Ever humble given his small town Midwestern roots, Weiss admits this is just one possible scenario. But with me, he has had a track record that’s worth following.

EDITOR’S NOTE: I’m getting ready for a big rally in my portfolio. This coming week I’ll tell you about one of my favourites, with soaring revenue (they’re on a $60 million annualized run rate now), positive adjusted EBITDA and a crazy cheap valuation.