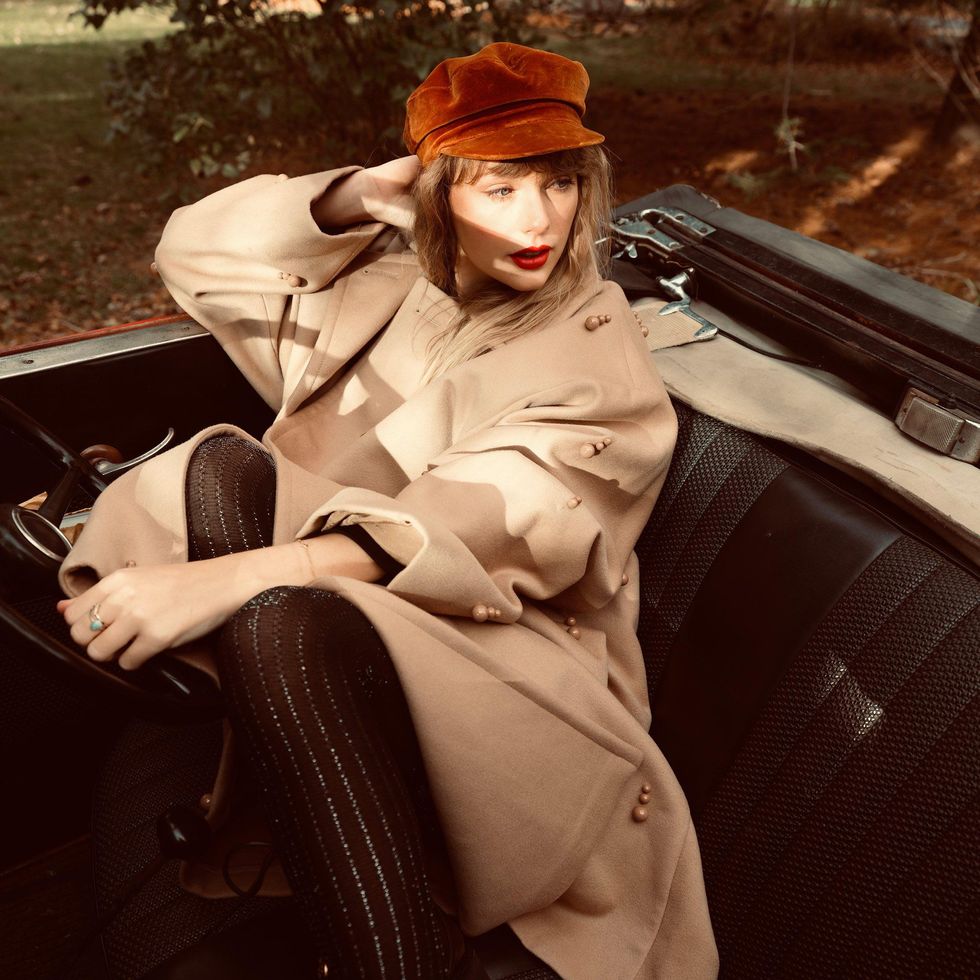 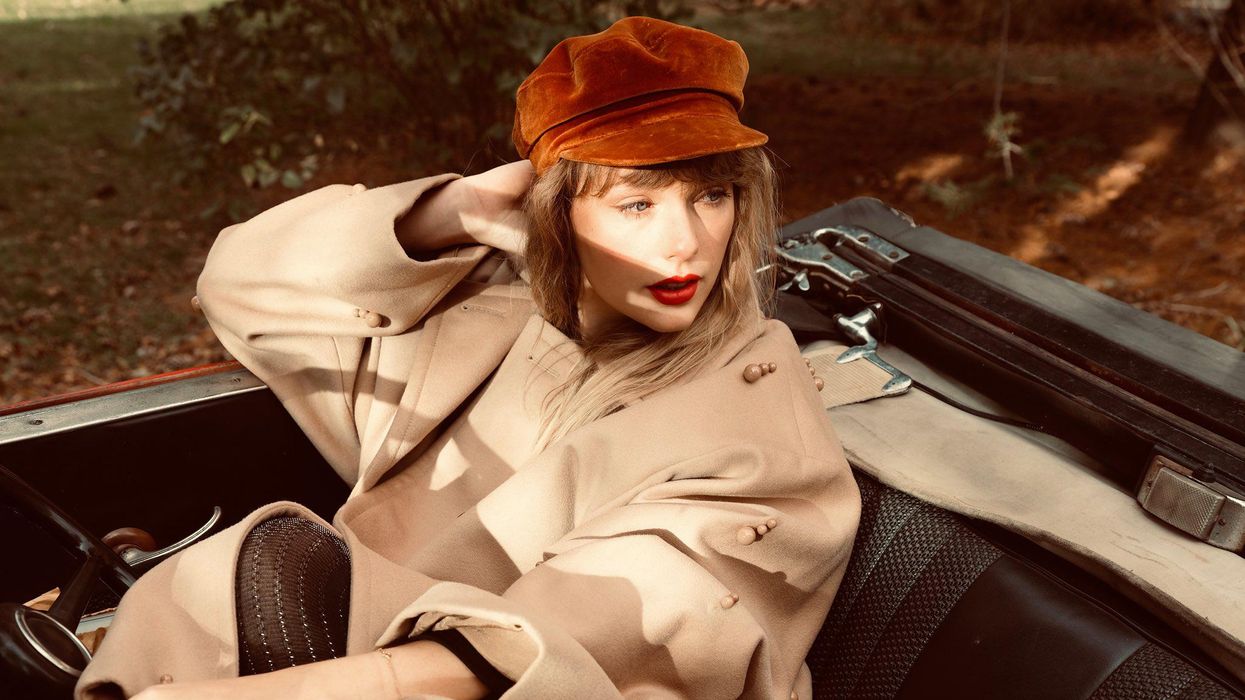 On November 12, Taylor Swift broke records (and possibly Spotify itself) when she dropped the latest of her re-recordings, Red (Taylor's Version). The album, which is Swift's fourth No. 1 album in 16 months, features 14 new songs (including a 10-minute version of the powerful ballad "All Too Well") in addition to 16 from the original album.

Related | The Swifties Who Think Taylor Has 'Voodoo' Powers

References to the Red (Taylor's Version) seemed to be everywhere –– most notably, on brand Twitter accounts. From candies like M&M and Skittles to sports teams like the Kansas City Chiefs (missed opportunity for the Cincinnati Reds), many companies have been using their social platforms to capitalize off Swift's latest endeavor.

Today might be Red's favorite day ever. Happy Red! #RedTaylorsVersion

Swift began rerecording her music to reclaim the rights to her previously released discography after Scooter Braun acquired the masters to her first six studio albums. Anytime someone presses play on an old Swift song, Braun directly profits. Money isn't the only thing Swift cares about when re-releasing her albums, though; it's also a clear act of self-empowerment and closure. So now, Swift — and all these companies — are undeniably benefiting.

Some of the companies tweeting for the re-release had explicit brand deals with Swift. Target, who has a history of selling exclusive Swift vinyl, shared a video encouraging people to buy the album at Target specifically. Starbucks also collaborated with Swift for the re-release, selling "Taylor's Version," a grande caramel nonfat latte that's supposedly the singer's favorite Starbucks drink, alongside a special playlist to boost streams and direct fans to merch.

If we see you sobbing in the parking lot to the 10-minute All Too Well, we’ll look away 🧣 Pick up your Target exclusive vinyl of Red (Taylor’s Version) in stores or online today! https://t.co/EfUEB8SEsw #TaylorSwift #RedTaylorsVersion ❤️ pic.twitter.com/dGJqZfwdr8

More interesting, though, is how brand Twitters often promote something in an attempt to follow current trends without having any clear financial partnership. Although they originated as cringy attempts to sell products, corporate accounts have become popular in the past few years by humanizing themselves. This way, faceless companies can appear relatable and promote products online, usually without the audience realizing they're doing so.

Knowing “All Too Well” what Po will be listening to all day… ❤️#RedTaylorsVersion pic.twitter.com/3ceXdasqif

Q: What comes out tomorrow?
A: #RedTaylorsVersion @taylornation13 @taylorswift13 pic.twitter.com/1brT7xHDnj

Some brands renamed their accounts to "[insert brand name] (Taylor's Version)" in anticipation of the album. Olive Garden tweeted a picture of someone listening to "Red (Taylor's Version)" next to breadsticks and marinara, with the text, "We're all f̶a̶m̶i̶l̶y̶ fans here. #RedTaylorsVersion," as a play on their slogan. The Teletubbies Twitter also joined in, following previous parodies of Ariana Grande and James Bond. A day before Swift's Red re-release, they posted a tweet that read, " Q: What comes out tomorrow?," with a clip of Po dancing to a voice repeating, "Red, red, red."

Other brands were a bit more niche with their references to Swift. Many used the red scarf emoji, a clear reference to the scarf Swift lost in "All Too Well." Panera, Taco Bell and Oreo all tweeted parodies of Swift song lyrics. Domino's also tweeted for the album release: "I AM ALL TOO UNWELL SO I WILL BE SOBBING AND EATING PIZZA IN BED TODAY," a clear attempt to empathize with fans while also promoting their pizza business.

Loving you was bread.

PLEASE DON'T FALL IN LOVE WITH SOMEONE who doesn't eat Taco Bell.

Nobody:
Us to milk: PLEASE DON'T BE IN LOVE WITH 😭 SOMEONE ELSE 😭

The best came from Sour Patch Kids, who tweeted, "Good morning to everyone except Jake Gyllenhaal... actually where is he I just wanna talk," paired with a photo of their red Sour Patch Kid. Gyllenhal and his short-lived relationship with Swift is supposedly the impetus for many of the songs on Red, including "All Too Well," and the re-release has reignited fans' (and apparently Sour Patch Kids') hatred of the movie star.

Good morning to everyone except Jake Gyllenhaal… actually where is he I just wanna talk pic.twitter.com/3IoxffKRbH

Brands aren't the only ones who have been taking advantage of Swift's re-release, though. On November 16, Massachusetts Senator Ed Markey tweeted, "We must pass the Build Back Better Act and take transformative action to address climate change. We cannot allow this moment to be 2009 again. I was there, I remember it all too well." His post was accompanied by the title picture of "All Too Well: A Short Film," only "Build Back Better" replaced "All Too Well," and ultimately prompted an investigation into whether or not he's a real Swiftie.

We must pass the Build Back Better Act and take transformative action to address climate change. We cannot allow this moment to be 2009 again. I was there, I remember it all too well. pic.twitter.com/KF7Yq0hLVP

Swift's impact was clearly felt across social media, much like how Drake's Certified Lover Boy saw a similar fate. And while brands certainly profited off her re-release, some partnering with Swift and others capitalizing on her momentum, Swift ultimately came out victorious. In its first week, Red (Taylor's Version) earned 605,000 equivalent album units, including both streams and copies sold, and 26 of the songs from the album appeared on Billboard's Hot 100.