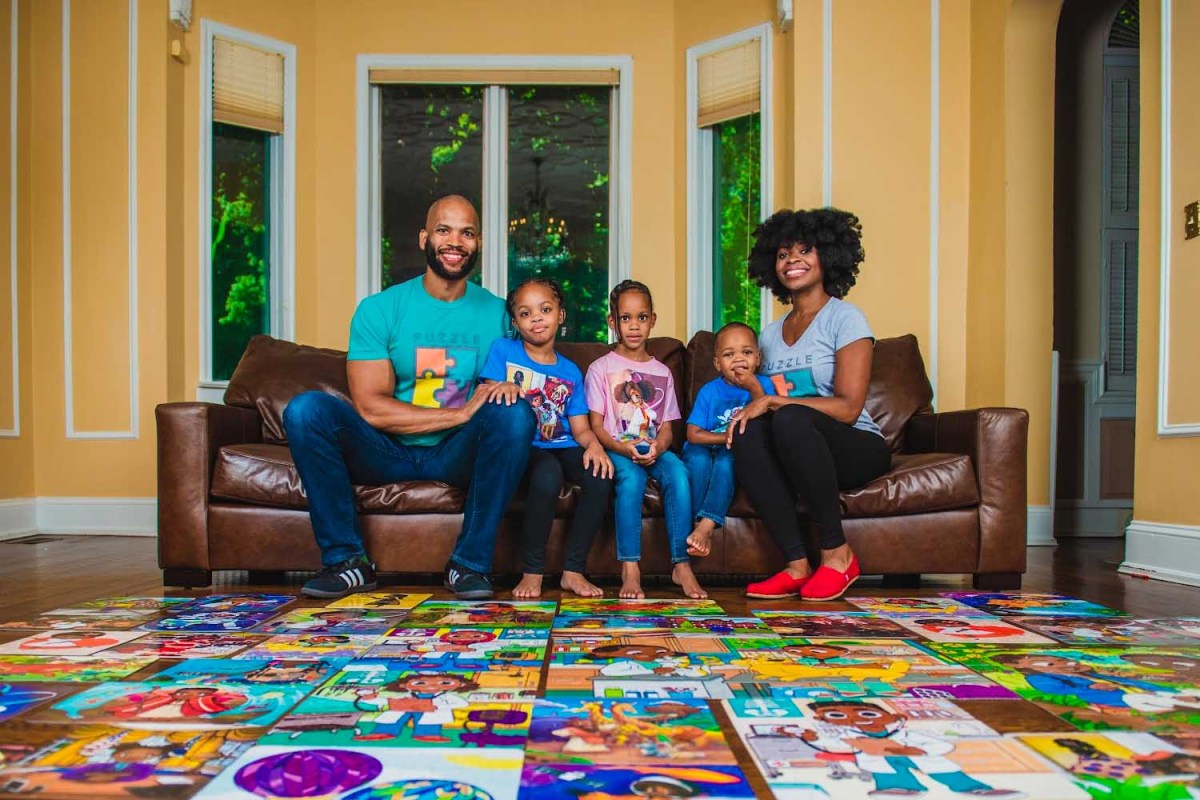 Puzzle maker Matthew Goins has a dream that someday, maybe 15 or 20 years from now, he’s going to meet a young Black woman who tells him that she was inspired to become a doctor because of the “Future Doctor” puzzles he created. Maybe it’s a young Black man who became a chef, also because of his puzzles.

Goins’s Puzzle Huddle, which launched in 2018, was born out of frustration. When his three children — now four, six, and eight — were old enough to start doing puzzles, Goins says he and his wife were dismayed by the lack of representation in existing children’s puzzles. “You get majority children, you get dinosaurs and farm animals, and flowers,” Goins says. “What I wanted was, first, diversity but then also representation in different environments [and professions].” No matter how hard he looked, he couldn’t find puzzles with images of children whose skin tone, hair texture, and eye color matched his family’s. “They just did not exist. I shopped on every platform to the last page of image libraries. They weren’t there. It was a bit surprising.”

So, Goins set about making his own puzzles for his kids, printing out images he’d found online of scientists and doctors and other professionals and spray-gluing them to cardboard, which he then cut into puzzle-sized pieces. The final product, he says, was poor at best. He took it up a notch, running to the craft store for cork board, foam board, chipboard, press board, an X-Acto knife, and better scissors. Still, his rudimentary puzzles weren’t good enough. “It was taking me too long to cut them and print them, and my kids were too heavy handed on them — they were ruined too quickly,” he says. “To spend six hours cutting the puzzle … was not a solution that was going to really solve the problem in the right way.”

Goins says he simply “wanted to buy some puzzles, spend some quality time with my family, and go to work in the morning. But this idea wouldn’t let me sleep. I have an undergraduate degree in business, and I have an MBA. I have a business-minded brain. And that part of my brain is always on,” he says. “We thought, Well, if our kids need diverse puzzles, gosh, our friends may, too. That’s why I started to look for a better way to scale a product solution, instead of finding more time to cut more puzzles in my kitchen.”

In 2016, Goins was working for a technology company. While three kids, diapers, daycare costs, and more made it a bad time for a new venture, Goins says he couldn’t un-glue himself from solving the puzzle of producing puzzles. “My background provided the conviction,” he says. Raised in Detroit, his mother is a retired elementary school principal; his wife, who grew up in Philadelphia, was a college professor and is now a college dean.

Goins says he didn’t know anything about the toy industry, and puzzle manufacturers in particular, so he simply began studying — ultimately discovering a gift card company that was printing postcard-sized puzzles as invitations for events like weddings and baby showers. He hired the company to print a small run of 4” x 6” puzzles, built a website, and announced his new venture on Facebook. “‘Hey, surprise, I sell puzzles now!” he says he posted.

People started buying “our delightfully small puzzles,” Goins says, remembering how quickly his living room transformed into a distribution facility. The puzzles were shipped from the manufacturer to his home, and one by one, Goins stuffed puzzles into a sleeve and then an envelope and mailed them off to his brand-new customers.

Goins says there were some pretty funny reactions to that first generation of puzzles he produced, like the buyer who emailed asking, “Do you know that puzzles normally come in a box?” Goins says, laughing at the memory. “Yes, but I was just cutting puzzles a few weeks ago with a pair of scissors, so I’m a mile away from where I was!” Goins recalls thinking, celebrating that he’d come as far as he had in such a short time.

Puzzle Huddle had already become a player in the puzzle industry when the company’s puzzles landed on Oprah’s Favorite Things list during the 2020 holiday season. The pandemic had been an accelerant for the small company. “Everybody was at home scrambling for something for their kids to do in the home environment. So we sold a lot of puzzles in the wake of the schools closing.” Then, George Floyd’s murder and the media’s attention on Black Lives Matter and Black-owned businesses helped boost sales, too; Goins says he turned much of his success into donations, giving away hundreds of puzzles to those who wanted a puzzle but couldn’t afford to buy his products.

By 2021, Puzzle Huddle had tripled in size and was now, indeed, selling puzzles in boxes. “We focus on minorities and professional images all designed to affirm and inspire children of color,” Goins says. Celebrating its fourth anniversary this month, Puzzle Huddle now also sells pillows, blankets, and T-shirts branded with images from his puzzle collection. In June 2021, Goins moved the company from his DC home into a warehouse facility in Rockville, Maryland, where he distributes to Macy’s, as well as two DC stores, Nubian Hueman and Mahogany Books. He also continues to sell online.

All this comes after Goins had simply wanted to make a difference for his three, small children. “Now, hopefully,” he says, “a few years and a lot of puzzles later, we will have made a difference for a whole generation of children.”

This article was featured in the InsideHook DC newsletter. Sign up now for more from the Beltway.

The post The DC Dad Who Built a Puzzle Empire From His Living Room appeared first on InsideHook.