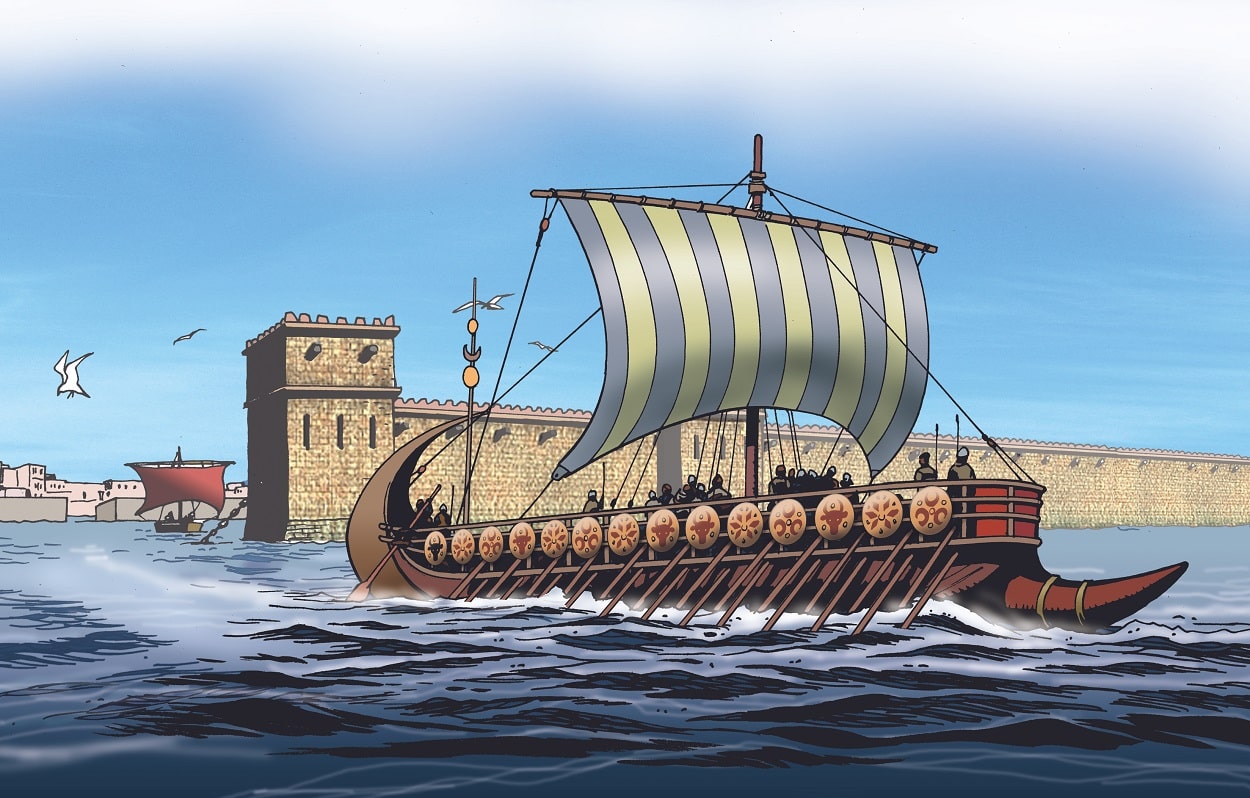 The fall of Carthage

The Carthaginian Empire was one of the great superpowers of the ancient world, centred on the city of Carthage on the eastern side of Lake Tunis in Tunisia.

According to the Greek historian Timaeus of Taormina, the city was founded around the 9th century BC by Phoenicians from Tyre, that gradually expanded its economic and political hegemony across the western Mediterranean by establishing a network of vassals and satellite states.

The strategic position along several major maritime trade routes provided an extensive mercantile system, supported by a powerful navy and army composed of heavy foreign mercenaries and auxiliaries that made Carthage a dominant power in the Mediterranean.

This expansion inevitably brought Carthage into conflict with many neighbours, such as the indigenous Berbers of North Africa and the Greek city-states such as the Greeks of Syracuse.

With the death of Agathocles of Syracuse in 288 BC, the Mamertines (“Sons of Mars”) seized the city of Messana in Sicily, resulting in the Carthaginians sending a fleet to the Messana strait. The Mamertines were divided into two factions, one advocating their surrender to Carthage, whilst the other sought assistance from the Roman Republic.

The Romans believed that the Carthaginian presence threatened Rome and her interests, and sent an expeditionary force to return control of Messana to the Mamertines, sparking the start of ongoing hostilities between the two great powers and the start of the Punic Wars.

The First Punic War was in the mid-3rd century BC, where the Romans landed in Africa and were ultimately repelled. Aware of the superiority of Carthaginian naval power, the Romans built a navy and using novel tactics inflicted several defeats at sea.

The most notable engagement was the Battle of Cape Ecnomus in 256 BC, in which 330 Roman warships engaged 350 Carthaginian vessels (considered one of the largest naval battles in recorded history), but ultimately the Romans sunk or captured 94 Carthaginian vessels.

After several years of stalemate, a divisive defeat at the Battle of the Aegates Islands in 241 BC forced the Carthaginians to sue for peace and make reparations under the terms of the Roman-dictated Treaty of Lutatius, including the surrender of part of Sicily which was annexed into the Roman province of Sicilia.

In 237 BC, Hamilcar Barca carved out a quasi-monarchical, autonomous Carthaginian state in southern and eastern Iberia. This gave Carthage the silver mines, agricultural wealth and manpower to stand against Rome on an equal footing once more.

Rome agreed new terms in 226 BC under the Ebro Treaty, specifying that all territories south of the Ebro River in Iberia was the boundary of Carthaginian rule. But Rome also sided with the city of Saguntum in Carthaginian lands, ultimately leading to Hannibal (son of Hamicar) sacking the city and starting the Second Punic War.

There were three main military theatres in the war: Italy (with occasional subsidiary campaigns in Sicily, Sardinia and Greece) where Hannibal crossed the Alps and almost reached the gates of Rome; Iberia, where Hasdrubal, a younger brother of Hannibal, defended the Carthaginian colonial cities; and Africa, which ended in the decisive Battle of Zama and the defeat of Carthage.

The treaty the Romans imposed essentially stripped Carthage of all its overseas territories leaving the Carthaginian Empire a mere city state, and forced an indemnity of 10,000 silver talents to be paid to Rome over 50 years. Carthage now also required Rome’s permission to wage war, and the Carthaginian military machine was dismantled, leaving a fleet of only 10 warships.

Taking advantage of the weakened position, King Masinissa of Numidia, exploited the prohibition on Carthage and continuously raided or annexed land. Carthage sent a force to defend its territory without Rome’s approval, and anti-Carthaginian factions in Rome used the illicit military action as a pretext to prepare a punitive expedition, starting the Third Punic War in 149 BC.

The Romans launched their final assault and over six days systematically destroyed the city and killed its inhabitants; only on the last day did they take prisoners, 50,000 of them who were sold into slavery.

In 120 – 130 BC Rome founded a new colony on the ruins of Carthage called Colonia Iunonia, but the Senate later abolished the colony. A new Roman city of Carthage was built by Julius Caesar called Colonia Julia Carthago, growing into one of the largest cities in the western half of the Roman empire and the centre of the Roman province of Africa.

The fall of Carthage