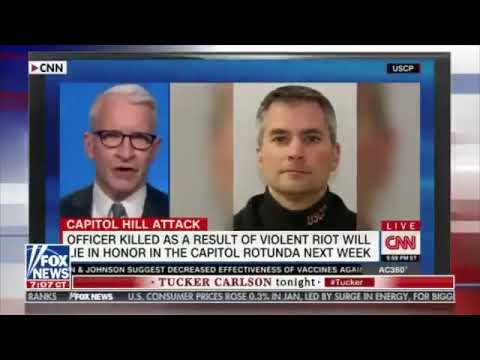 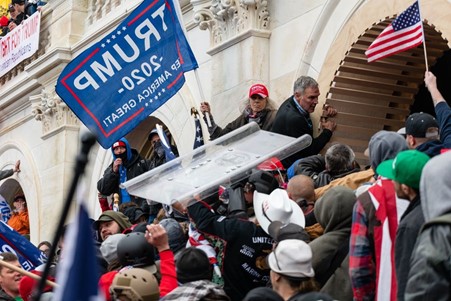 What took place at the Capitol on January 6 was undoubtedly a politically motivated riot. As such, it should not be controversial to regard it as a dangerous episode. Any time force or violence is introduced into what ought to be the peaceful resolution of political conflicts, it should be lamented and condemned.

But none of that justifies lying about what happened that day, especially by the news media. Condemning that riot does not allow, let alone require, echoing false claims in order to render the event more menacing and serious than it actually was. There is no circumstance or motive that justifies the dissemination of false claims by journalists. The more consequential the event, the less justified, and more harmful, serial journalistic falsehoods are.

Yet this is exactly what has happened, and continues to happen, since that riot almost seven weeks ago. And anyone who tries to correct these falsehoods is instantly attacked with the cynical accusation that if you want only truthful reporting about what happened, then you’re trying to “minimize” what happened and are likely an apologist for if not a full-fledged supporter of the protesters themselves.

One of the most significant of these falsehoods was the tale — endorsed over and over without any caveats by the media for more than a month — that Capitol Police officer Brian Sicknick was murdered by the pro-Trump mob when they beat him to death with a fire extinguisher. That claim was first published by The New York Times on January 8 in an article headlined “Capitol Police Officer Dies From Injuries in Pro-Trump Rampage.” It cited “two [anonymous] law enforcement officials” to claim that Sicknick died “with the mob rampaging through the halls of Congress” and after he “was struck with a fire extinguisher.”

A second New York Times article from later that day — bearing the more dramatic headline: “He Dreamed of Being a Police Officer, Then Was Killed by a Pro-Trump Mob” — elaborated on that story: 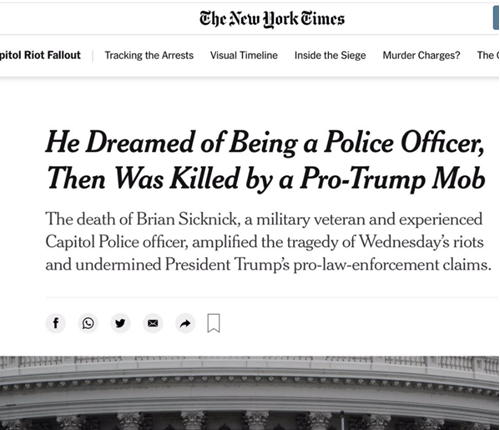 After publication of these two articles, this horrifying story about a pro-Trump mob beating a police officer to death with a fire extinguisher was repeated over and over, by multiple journalists on television, in print, and on social media. It became arguably the single most-emphasized and known story of this event, and understandably so — it was a savage and barbaric act that resulted in the harrowing killing by a pro-Trump mob of a young Capitol police officer.

It took on such importance for a clear reason: Sicknick’s death was the only example the media had of the pro-Trump mob deliberately killing anyone. In a January 11 article detailing the five people who died on the day of the Capitol protest, the New York Times again told the Sicknick story: “Law enforcement officials said he had been ‘physically engaging with protesters’ and was struck in the head with a fire extinguisher.”

But none of the other four deaths were at the hands of the protesters: the only other person killed with deliberate violence was a pro-Trump protester, Ashli Babbitt, unarmed when shot in the neck by a police officer at close range. The other three deaths were all pro-Trump protesters: Kevin Greeson, who died of a heart attack outside the Capitol; Benjamin Philips, 50, “the founder of a pro-Trump website called Trumparoo,” who died of a stroke that day; and Rosanne Boyland, a fanatical Trump supporter whom the Times says was inadvertently “killed in a crush of fellow rioters during their attempt to fight through a police line.”

This is why the fire extinguisher story became so vital to those intent on depicting these events in the most violent and menacing light possible. Without Sicknick having his skull bashed in with a fire extinguisher, there were no deaths that day that could be attributed to deliberate violence by pro-Trump protesters. Three weeks later, The Washington Post said dozens of officers (a total of 140) had various degrees of injuries, but none reported as life-threatening, and at least two police officers committed suicide after the riot. So Sicknick was the only person killed who was not a pro-Trump protester, and the only one deliberately killed by the mob itself.

It is hard to overstate how pervasive this fire extinguisher story became. Over and over, major media outlets and mainstream journalists used this story to dramatize what happened:

Television hosts gravely intoned when telling this story, manipulating viewers’ emotions by making them believe the mob had done something unspeakably barbaric:

After the media bombarded Americans with this story for a full month without pause, it took center stage at Trump’s impeachment process. As former federal prosecutor Andrew McCarthy noted, the article of impeachment itself stated that “Trump supporters ‘injured and killed law enforcement personnel.’” The House impeachment managers explicitly claimed on page 28 of their pretrial memorandum that “the insurrectionists killed a Capitol Police officer by striking him in the head with a fire extinguisher.”

Once the impeachment trial ended in an acquittal, President Joe Biden issued a statement and referenced this claim in the very first paragraph. Sicknick, said the President, lost “his life while protecting the Capitol from a violent, riotous mob on January 6, 2021.”

The problem with this story is that it is false in all respects. From the start, there was almost no evidence to substantiate it. The only basis were the two original New York Times articles asserting that this happened based on the claim of anonymous law enforcement officials.

Despite this alleged brutal murder taking place in one of the most surveilled buildings on the planet, filled that day with hundreds of cellphones taping the events, nobody saw video of it. No photographs depicted it. To this day, no autopsy report has been released. No details from any official source have been provided.

Not only was there no reason to believe this happened from the start, the little that was known should have caused doubt. On the same day the Times published its two articles with the “fire extinguisher” story, ProPublica published one that should have raised serious doubts about it.

The outlet interviewed Sicknick’s brother, who said that “Sicknick had texted [the family] Wednesday night to say that while he had been pepper-sprayed, he was in good spirits.” That obviously conflicted with the Times’ story that the mob “overpowered Sicknick” and “struck him in the head with a fire extinguisher,” after which, “with a bloody gash in his head, Mr. Sicknick was rushed to the hospital and placed on life support.”

Read the rest - and support the author - here.
Source: ronpaulinstitute.org