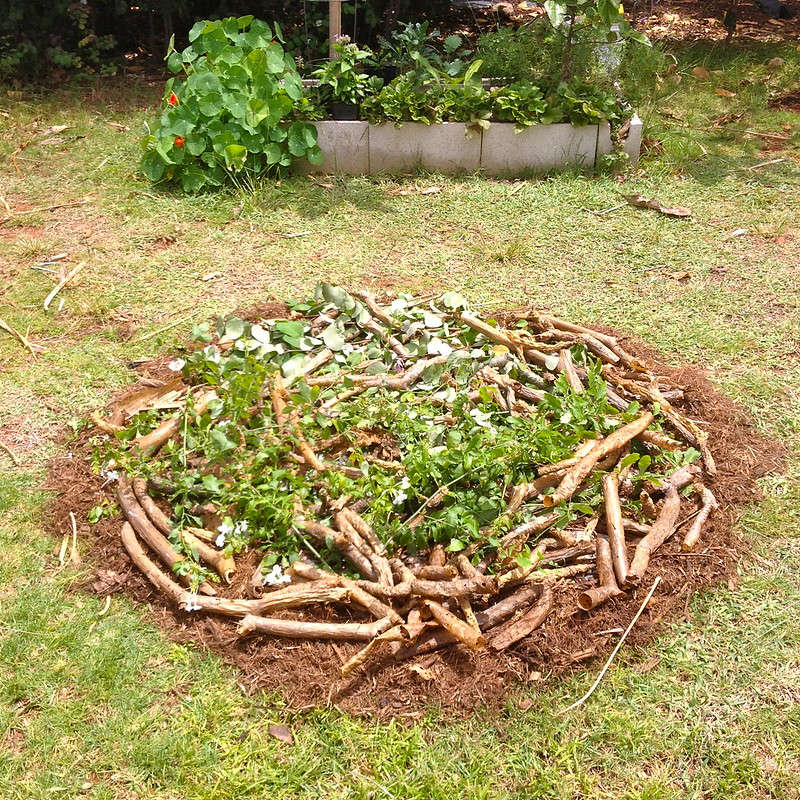 The Garden Decoder: What Is ‘Hugelkultur’?

Perhaps, like me, you grow herbs and vegetables in traditional garden beds made from lumber, nails, and bolts, and filled with organic soil and compost. There’s another way to build garden beds, though, that has been around for hundreds of years and is way more sustainable.

Hugelkulture, pronounced HEW-gul-kul-TOOr, is German for “hill mound” or “hill culture.” It’s a no-dig, drought-tolerant, raised-bed technique that relies on decomposing wood and garden debris to create what is essentially a compost pile-cum-garden bed. Now that I know about this resourceful method, I’ll never be able to look at my pedestrian garden beds the same way again.

What are the benefits of hugelkultur? 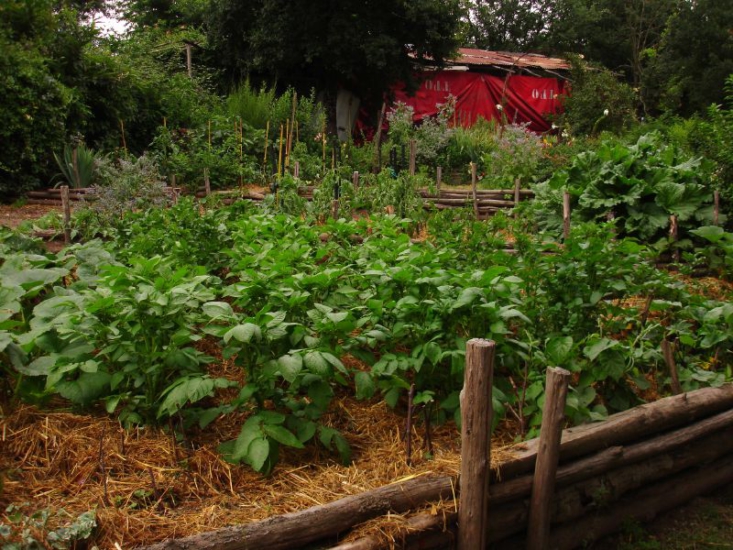 Above: Potatoes growing in a hugelkultur bed, topped with a layer of straw mulch. Photograph by hardworkinghippy via Flickr.

Hugelkultur was coined by German horticulturists in the late 1970s but is a technique that quite possible has been around for centuries. At its most basic, hugelkultur simply means creating a layered raised garden bed from natural materials you already have. Instead of disposing all your excess logs, fallen branches and leaves, and grass clippings as garden waste, you use them to build a mound that will, within months, turn into rich garden soil for your plantings.

This type of permaculture-based planting bed has numerous positives. One is that hugelkultur beds hold on to moisture longer as the logs and branches act like living sponges that store rainwater. In fact, your hugelkultur bed can be quite drought-tolerant after the first year and may not require watering at all. 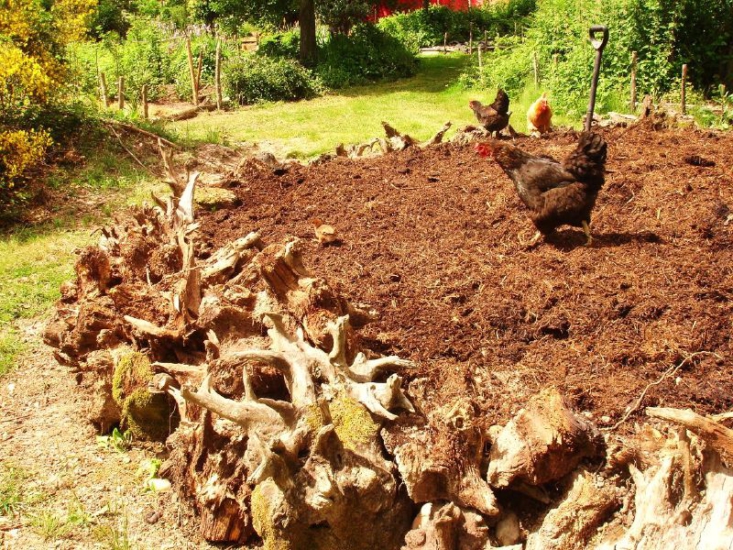 Above: A raised hugelkultur bed ready for planting. Photograph by hardworkinghippy via Flickr.

Your hugel bed also builds up fertile soil, increases soil aeration, generates heat which extends the growing season, and uses the natural and gradual decay of wood and garden debris to boost plant growth with its slow release of important nutrients; this means fertilizing is not needed. In addition, hugelkultur encourages an environment teeming with beneficial worms, fungi and mycorrhizae. Last, by not burning your excess wood (which adds carbon to the air), you are locking carbon into the soil instead.

How do you build a huglekultur bed? 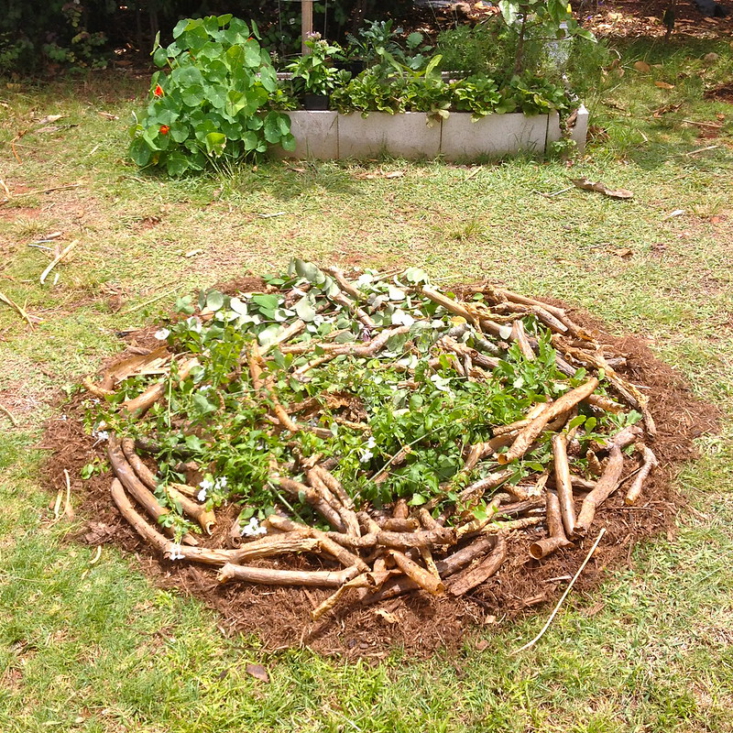 Above: A hugelkultur bed ready for a top layer of compost and soil. Photograph by Rosa Say via Flickr.

Like composting, the key to hugelkultur is its mix of brown and green materials. Here are the basics: first pile up cut logs, old firewood, or thick branches as your woody base layer. If you have to, you can always call your local power company and ask them to drop off free wood. Next, cover the woody base with about 12 inches of dead leaves and dry straw. You can also add other items like cardboard and newspaper into the middle layers. 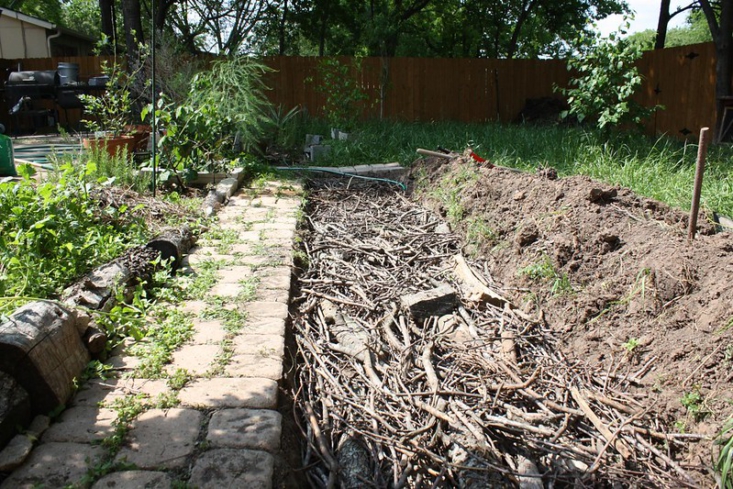 Above: If you don’t like the mound look, you could always dig down to create a trough first before adding your layers. Photograph by Jon Roberts via Flickr.

Then layer on some green leaves and lawn clippings and top with organic well-rotted compost. Finally your organic cake receives an icing of topsoil. Once built up, your raised bed is ready to be planted. Excellent edibles to grow are potatoes, sweet potatoes, pumpkins, tomatoes, lettuce, and berry bushes.

Any tips for a successful hugelkultur? 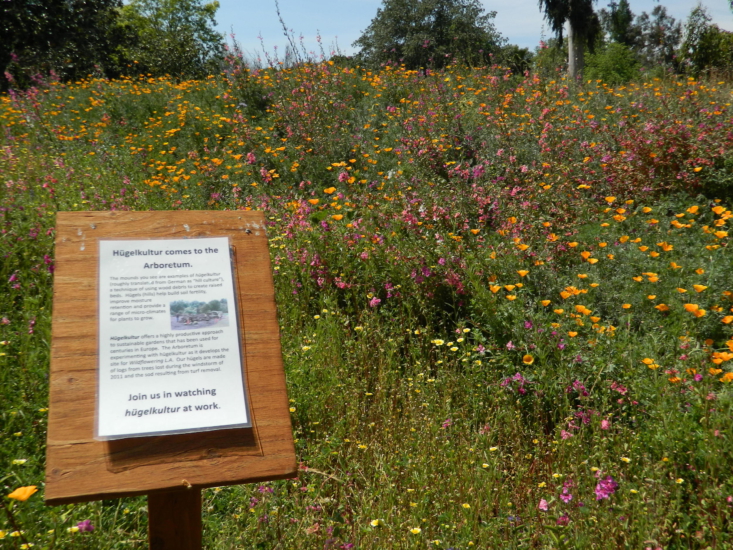 Above: Wildflowers thriving on a hugelkultur mound at the Los Angeles County Arboretum in Arcadia, CA. Photograph by Jengod via Wikimedia.

For more organic ways to boost your soil, see:

The Garden Decoder: What Is ‘Hugelkultur’?