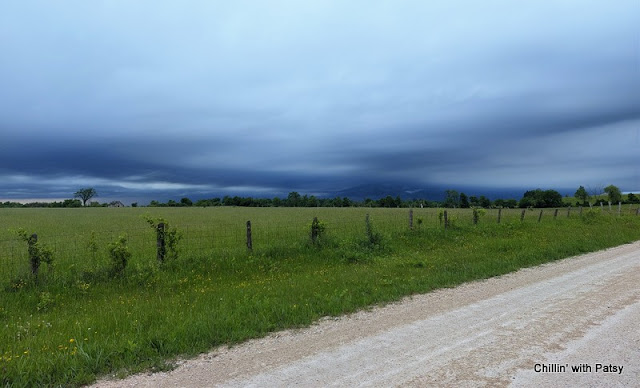 The Heat is On and So is the A/C

On Wednesday, June 15th Bill was up with Gibbs at 6:15 and I got up with him later minutes before 7. I wasted no time and while I knew Bill didn’t have to leave until 7:45 for work, I left right away. The Mat was empty but there was evidence of some vagrants again. Darn, I’d hoped that had stopped. Silly me.

There were clothes on the floor, two washers filled with dry clothing and an empty ‘purse’ in a dryer. Graffiti in the form of “I’ll be back soon” was written in permanent marker on the table for folding. I had nothing to remove it but rubbing alcohol at least diffused it a bit. The Lost & Found box is almost full again. 😌 I did my cleaning, loaded some of the small pieces of wood in the storage room in Ptooties and drove home. 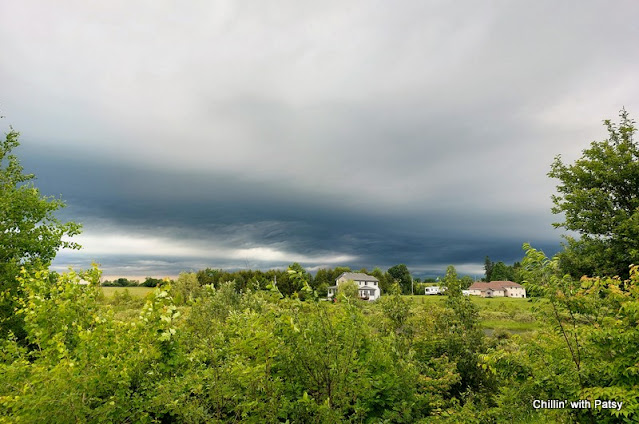 When I returned home, Gibbs played around while I turned the pump on and watered my plants. I praise Bill every time I turn it on ♥, we’ve wanted this for a long time.

With that done, I found myself pulling weeds out of the flower garden. It’s a full-time job but I got a lot pulled before I saw Gibbs playing with a painted turtle. Oh, my goodness! He’s sniffed at them before but this time he was pawing at it and flipped it over. He wanted to play with it!

I carried Mrs. Yertle down to the edge of the lane, facing the pond and Gibbs got put on his leash near the Bunky. I finished the puzzle, there was a nice breeze in there. At 12 noon, we came inside and sat together for half hour. I had to leave at 12:30 to take Ptooties for her oil change. I arrived at Grey Bruce Fleet a few minutes early so chatted with Kate in the air-conditioned waiting room.

She has their two dogs with her and one, in particular, just wanted to be near someone. Timber sat with me for most of the hour. Look at those eyes! Things were okay with the Rav, just wipers needing replacing (which Bill can do) and a heads up for tires in the spring. We ask for a check up while she is in the shop. 😊  On my way through Durham, I stopped at FS Co-op.

Since my spinach and Swiss chard is not growing, I wanted to see what vegetables they had already started and if there was anything I’d be interested in. The only thing I found was eggplant. Since I love eggplant and read that one of my fellow bloggers is growing it, I thought it was worth a shot. I also found a potted ‘bush’ plant that flowers between August to October and is good for full sun. It was $16 so very reasonable.

After sitting in the a/c room at the shop and in the Rav, I closed things up and turned our a/c on in the Suite. Aaah, that’s better. It was just too hot to be sitting outside, even in the Bunky. The thermometer was reading 19C/66F this morning so already warm but at 2 pm, it was 29C/84F and higher with the humidity looming. We didn’t get the storms or the rain that was forecast overnight so that is why I had to water the gardens.

For supper, I had liver, bacon and onions and Bill had leftover ghoulash. We had corn on the cob and the last 4 biscuits from the other night. No dessert required but we did have a few slices of pineapple. 😊 Bill went to the Hangar after dishes and he’d made his lunch of egg salad, which I made today for him. I wanted a few boiled eggs for my lunches too so it made sense.

I worked on my blog and did nothing for the remainder of the evening aside from watching some tv. This was a good day with just a few obligations. Maybe tomorrow after work I will find a place to plant some mint and my new bush.

Thank you for stopping in.

The Heat is On and So is the A/C