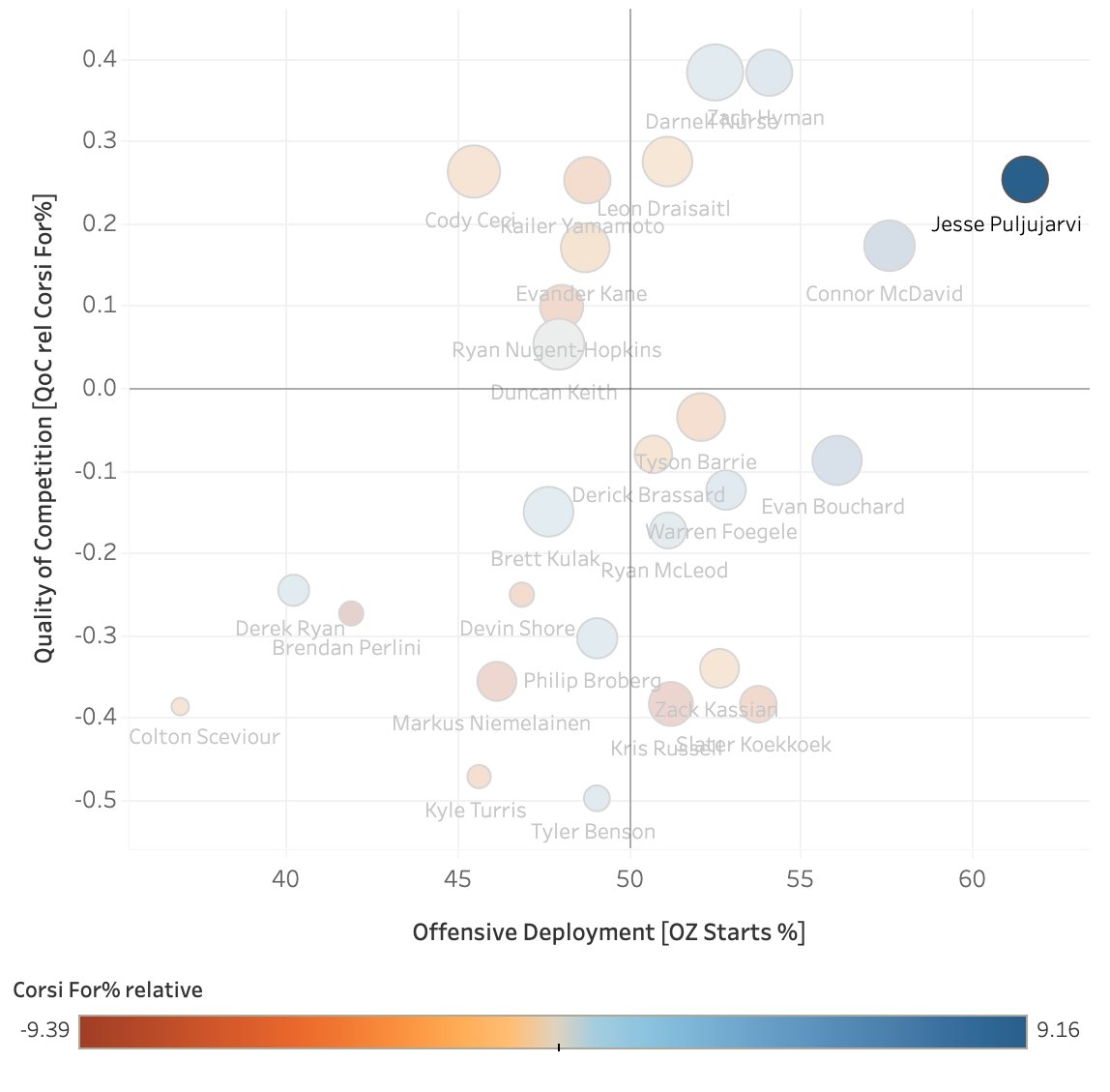 Welcome back to The Journey, where we follow hockey prospects and their paths to the NHL, providing fantasy predictions and analysis along the way. This week, we'll examine the trajectories of three young players who are establishing a concerning pattern of crashing production-wise mid-season and attempt to ascertain what we can expect from them moving forward.

The young speedy Senator went nearly a point per game (15 in 17) in the second quarter of the season but has only managed 13 points in the other 50 games. The strangest part is that from the second to the third quarter his ice time went up by over two minutes, his power-play time increased by almost a minute, and his shot rate rose slightly (2.2 to 2.3). But his points plummeted from a 72-point pace to a 28-point pace.

Formenton joined Connor Brown and Tim Stutzle in Q2, and the three clearly discovered lightning in a bottle. During that stretch, Brown scored nine points in 11 games and Stutzle scored 12 in 16. Although one might think that the dynamic Stutzle was the driver on that line, Formenton had a higher IPP (78) than both Stutzle (68) and Brown (69). Notably, however, all three are heavily involved in goals scored while they're on the ice regardless of linemates—which have been shuffled fairly regularly throughout the season by coach D.J. Smith. Although the three were reunited eight games ago, Formenton has been unable to rediscover his scoring touch (one point) and has stopped shooting the puck (nine shots), as has Brown, while Stutzle is having the best run of his year so far (6 points in 7 games).

At the end of the day, Formenton is a 22-year-old rookie on a similar season-long scoring pace as more-hyped prospects like Alex Newhook and Philip Tomasino. But he's also contributing more in multi-cat formats than either of those comparables with his two shots and 1.3 hits per game. Further, while both Newhook and Tomasino have more or less chugged along at a similar pace all year, Formenton had this incredible point-per-game spurt mid-year—which shows that he's at least capable of elite production if he can keep consistent linemates and figure out how to sustain his high-level play.

The real Formenton likely isn't a point-per-game player. His profile to this point has been an elite speedster with middle-six skill. He scored at only a half-point-per-game pace in his OHL draft year, which isn't great, and peaked in his D+2 year in the AHL when he scored 53 points in 61 games as part of a stacked Belleville squad featuring players like Josh Norris, Drake Batherson, Logan Brown, Vitaly Abramov, and Erik Brannstrom—several of whom have since graduated to the NHL. He then struggled in his D+3 year, scoring only four goals in 13 games, before graduating to Ottawa full-time this year.

Inconsistency isn't surprising at all for young players at the highest level; expect Formenton to continue having hot and cold stretches until he gets closer to approaching his 200-game Breakout Threshold. At that point, he'll likely settle in as a 45-55-point player in the mould of Alex Iafallo or Carl Hagelin who can play up and down the lineup and produce in spurts.

Here's an example of his speed and skill; he jumps on a loose puck, swoops in alone, and roofs it.

His early success came alongside Connor McDavid and Zach Hyman. Coach Tippett kept that line together for the first half of the season until he was replaced in February by Jay Woodcroft. Since then, Puljujarvi has played first with Leon Draisaitl and Warren Foegele and then with McDavid and Evander Kane. As pointed out in a feature piece on the Oilers' system back in February, Puljujarvi's low IPP (49) suggests he's more of a passenger than a driver offensively—apparently regardless of his world-class linemates. His other metrics all seem normal apart from his secondary assist rate, which is quite low. But even when that corrects, it'll only add a few extra points to his total.

He's still likely another couple seasons away from hitting his 400-game Breakout Threshold as a bigger player (6-4, 200 lbs) but it's beginning to look like Puljuarvi's ceiling might be similar to Formenton's: a 45-55-point player who adds a couple shots and 1.5 hits per game and can be a reliable player in his team's top six. The good news for Oilers fans is that he's driving play very well against tough competition (dark blue circle). Even if he doesn't end up hitting that extra gear offensively that would establish him as a high-end fantasy asset, he can still be a useful player for fantasy squads—especially in multi-cat formats.

Cirelli's production has now plummeted at the halfway point two years in a row. In 2020-21, he crashed from a 70-point pace to a lowly 14. This year, he fell from a 56-point pace to 35. His power play and ice time have also fallen accordingly to the point that he's seeing almost two minutes less on the man advantage and almost three and a half minutes less at even strength. So again, what is behind this concerning pattern and what can fantasy managers expect from the 24-year-old moving forward?

If Formenton is known for his speed and Puljujarvi for his proficiency as a power forward, Cirelli has been billed for years now as one of the game's best two-way forwards—like a Sean Couturier type. The data backs up that assessment: Cirelli drives play against other team's best players without seeing many offensive zone starts. Along with Erik Cernak, Cirelli has been playing a key role in Tampa's success this year, essentially replacing the Barclay Goodrow – Blake Coleman – Yanni Gourde line that helped fuel the team to their second consecutive Cup.

Couturier didn't break out offensively until his seventh season, just past his 400th NHL game. He has three inches and twenty pounds on Cirelli, so while that trajectory seems long, it actually fits the Breakout Threshold theory. The bad news for Cirelli owners is that he should have passed his own 200-game BT over 80 games ago, and yet we haven't seen the same jump to point-per-game status that we saw from Couturier in 2017-18.

Looking back to his junior days, Cirelli never displayed the high-end production in his Draft or D+1 years that is expected from players who end up becoming NHL stars. He fell just shy of a point-per-game in his D+1 year and just above ppg in his D+2. So statistically it never looked like Cirelli was going to become a star at the NHL level. But still, his dramatic drops in production are threatening to make him unrosterable in fantasy.

His most consistent linemate for the last couple years has been Alex Killorn, and interestingly Killorn's production has followed a similar pattern of crashing mid-year. Killorn is still clinging to the best scoring pace of his career this year, and he's seeing a lot more power play time than Cirelli. Perhaps the decline is team-related: over the Lightning's last 20 games, they've only won nine of them. However, they've averaged over three goals a game during that stretch—Cirelli and Killorn just haven't played much of a role in that scoring, even though Stamkos, the team's leading point-getter, has been added to their line.

Even though he's still young, Cirelli is running out of time to salvage his reputation as a reliable, mid-tier producer in fantasy. Like the other two players profiled here, Cirelli adds decent contributions in multi-cat formats with almost two shots and a hit per game. And he's generally at least a reliable source of plus-minus as a member of a dominant Lightning squad. But it's still unclear for now whether he'll settle in at his 40-point floor or 55-point ceiling. The former is barely above replacement level, even with his decent plus-minus and peripherals, so his owners better hope he rediscovers his extra gear offensively and stays there.