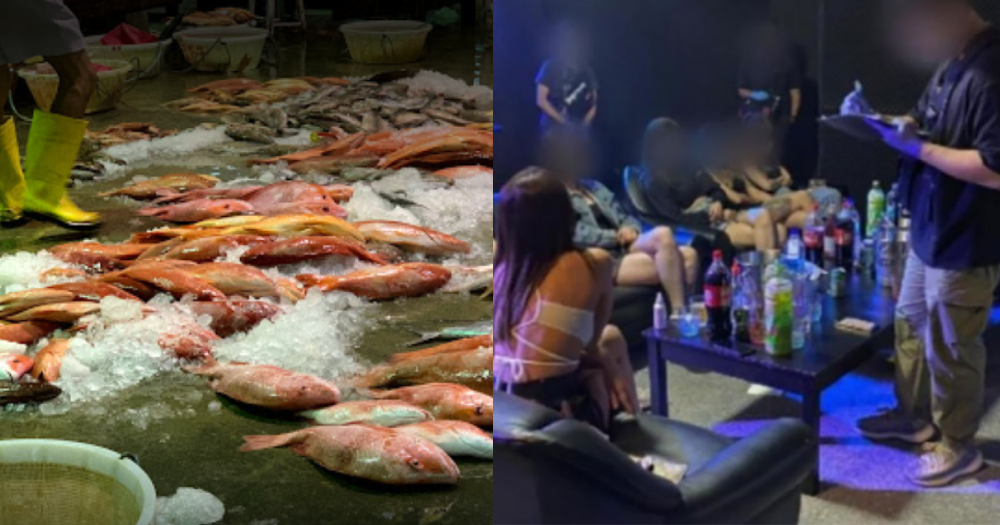 The KTV & Jurong Fishery Port clusters have exploded. Could this have been avoided?

COMMENTARY: The explosion of the Covid-19 clusters linked to KTV lounges in Singapore, as well as Jurong Fishery Port, may seem unsurprising on hindsight given the locations involved.

But could it have been avoided?

That was when the Ministry of Health (MOH) first said that they are investigating cases of Covid-19 infection among Vietnamese social hostesses who had frequented KTV lounges.

Fishmongers who had visited the port had mingled with other market stallholders after returning to their wet market stalls, resulting in even more cases at markets all over the island.

In a span of slightly over a week, the KTV lounge cluster swelled to over 200, while the Jurong Fishery Port cluster has grown to a total of over 300 cases, as of July 20.

Clusters believed to be linked. But how?

The explosion of both clusters within the same timeframe seem to be no coincidence.

Health minister Ong Ye Kung said on July 19 that unlike the Tan Tock Seng Hospital and Changi Airport clusters involving the Delta variant, the cases in the new clusters are closer to what was detected in imported cases from Indonesia, he said.

While a Shin Min Daily News report on July 18 claimed that a Jurong Fishery Port worker allegedly moonlighted at KTV after dark, there has been no official confirmation offering details on how these two clusters are linked exactly.

Director of Medical Services Kenneth Mak revealed during a Multi-Ministry Taskforce press conference on July 20 that there has been at least one Jurong Fishery Port worker who frequented a KTV lounge within his infectious period.

However, it's not possible to verify whether that individual did transmit an infection, and they are unable to identify a specific case that led to transmission from the boats to the fishery port, and then to wet markets across the island.

Many things are unsurprising on hindsight

In any case, what is pertinent is not so much how the clusters are linked, but rather, how the number of cases in these cluster exploded.

On hindsight (which is always 20/20), this may seem somewhat unsurprising considering the locations involved.

Both instances involve exposure to different groups of people and to a certain extent, mask-off activities, which may have contributed to even greater transmissibility.

KTV lounges are a confined, indoor space — often with poor ventilation — where patrons engage in unmasked activities, such as eating and drinking with others.

"Groping and fondling" were also common in such settings, with the Straits Times reporting on how hostesses would split themselves up between different patrons, going from group to group in what was described to be a "butterfly" phenomenon.

Similarly (but in slightly different ways), seafood wholesale markets might also be particularly susceptible to virus transmission based on the way it operates.

Fishmonger Xavier Ng shared with Mothership that there's a lot of shouting going on at Jurong Fishery Port given the size of the place. During peak hours, many fishmongers are also walking around to buy and sell their goods.

Given how "physically demanding" the work is, Ng said that the fishmongers sometimes remove their masks to catch a breather when they are "tired".

In such an environment, it can be challenging to maintain safe distancing — something that Mak also acknowledged during the press conference.

The number of community cases, both linked and unlinked, have continued to escalate worryingly in the past month.

In fact, between July 12-18, an average of 46 community cases was detected per day -- the highest amount of cases since April 2020.

In order to reduce the risk of transmission, it was announced that tightened measures will kick in from July 22 to Aug. 18 with social gathering sizes down to two.

On July 21, the health minister addressed queries on the "reversion" to Phase 2 (Heightened Alert), saying that it was not due to the KTVs, but rather, the Jurong Fishery Port cluster. These markets, being frequented by seniors who may not be vaccinated, pose a "risk of an uncontrollable risk in cases".

This scaling back of social activities isn't completely new to us as we've seen multiple cycles of tightening and loosening of restrictions in the past year. But what the KTV and Jurong Fishery Port clusters have exposed are certain vulnerabilities that we could pay closer attention to.

Well-intentioned policies that end up being misused

For every policy that allows for a certain group of people to benefit, there is also the risk that it may be misused or exploited, putting the wider community at risk.

Granted, no policy comes risk-free, but one might argue that checks and appropriate verification processes should be implemented to minimise the risks of loopholes being exploited.

On July 16, more information on the KTV cluster's "index cases", or the first reported case, was revealed by the Immigration and Checkpoints Authority (ICA) and the Ministry of Manpower (MOM).

The Vietnamese woman, who was the first reported Covid-19 case in the KTV cluster, entered Singapore in February 2021 via the familial ties lane, sponsored by a Singaporean who is supposedly her boyfriend.

This scheme is for the purpose of reuniting locals with foreign family members or partners. However, some have pointed out that this could be a potential "loophole" that allows for vice activities to be carried out under the ruse of 'familial reconciliation'.

Despite the risk, such immigration policies were allowed on "compassionate grounds".

ICA has since removed this category in March 2021.

The same goes for nightlife operators, which were allowed to pivot temporarily to F&B from October 2020.

While this was targeted at offering such operators a lifeline, a number of errant establishments continued to operate nightlife activities and employing hostesses to serve and mingle with customers.

Which brings us to the issue of enforcement action taken.

Following the news of the KTV cluster, 29 women were arrested by the Singapore police during an island-wide anti-crime operation from July 13 to 15.  The operation covered 27 KTV lounges that pivoted into food and beverage (F&B) outlets.

For the first time since the enhanced penalty framework kicked in in May 2021, F&B licenses of three pivoted nightlife operators were revoked, after they were found to have breached Safe Management Measures (SMMs).

Frustration and disappointment have been directed towards the black sheep of pivoted nightlife operators, with some asking if anything could have been done to clamp down on errant F&B operators earlier.

Alan John, former deputy editor of the Straits Times and editorial consultant with the South China Morning Post, asked about the huge costs that a small group of "selfish KTV owners, their employees and patrons" has imposed on other Singaporeans.

He observed how this recent tightening measures will be a toll on the "mental well-being, a cost to the spirit" of Singaporeans.

In a subsequent post, John noted that "from all that has been reported so far, the KTV crowd - owners, employees and patrons - remain the biggest group of the most irresponsible, reckless individuals we have seen through 18 months of the pandemic".

A Straits Times article also pointed out some "red flags" in these KTV outlets, asking why such places were not monitored more closely.

For instance, many of these operators do not have full-fledged kitchens, and would likely only serve drinks and snacks. Hence, it doesn't seem likely that most patrons would leave after a short period of time, as compared to a restaurant or cafe.

Given the increased risk associated with mask-off activities in these establishments, questions remain: Could the policy on pivoted nightlife establishments be improved? Did the policy take into account the implementation or unintended outcomes? Were there sufficient checks carried out by safe distancing ambassadors (SDAs) at such establishments? What about enforcement at KTV lounges carrying out vice activities?

Recently, a Straits Times report revealed that there were nearly 600 breaches in Covid-19 requirements among nightlife establishment operators in Singapore since Oct. last year.

If pivoted nightlife venues are to reopen for F&B after two weeks, it is even more crucial that we get this right the second time round.

Where does individual responsibility come in?

Perhaps relying on enforcement alone is not the best way to go.

A Lianhe Zaobao commentary emphasised the importance of responsibility, with a poignant line ("多一点责任感，少一点私利欲望") expressing a hope that everybody can be a "little more responsible, and a little less selfish".

While many were quick to lambast the lounge patrons following the KTV cluster, the Zaobao article highlighted that it takes businesses and individuals to do their part in following the rules, alluding to the importance of everybody doing their part.

It's easy to point fingers, but most clusters do not actually involve one or two irresponsible super spreaders who go on to infect an entire community. Even if this really was the case, it is sometimes impossible to verify.

We have seen how easy it is for a single cluster to derail our progress.

But as 20-year-old Ng highlighted, perhaps we sometimes need "bad things need to happen for people to be afraid of the consequences". "That fear then leads to an improvement in preventing virus spread," he said.

While it seems like one step forward, two steps back right now, perhaps this is what the trajectory of progress is supposed to look like.

The KTV & Jurong Fishery Port clusters have exploded. Could this have been avoided?