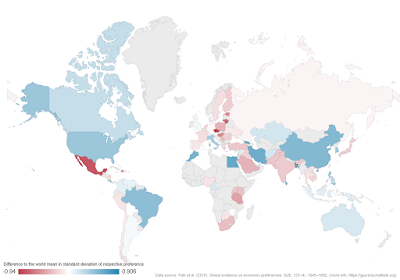 The mental qualities that make a society workable

A questionnaire survey found very low levels of altruism in Czechs and very high levels in Moroccans, Egyptians, and Bangladeshis. Do these results show differences in actual behavior or differences in socially desired response? (GPS 2020)

Emil Kirkegaard and Anatoly Karlin have written a paper on the relative importance of intelligence versus other mental traits in determining national well-being. Their conclusion? Intelligence contributes a lot more to national well-being than do time preference, reciprocity, altruism, and trust.

We find that overall, national IQ is a better predictor of outcomes than (low) time preference as well as the five other non-cognitive traits measured by the Global Preference Survey (risk-taking, positive reciprocity, negative reciprocity, altruism, and trust). We find this result across hundreds of regression models that include variation in the inclusion of controls, different measures of time preference, and different outcomes. Thus, our results appear quite robust. Our results do show some evidence of time preference's positive validity, but it is fairly marginal, sometimes having a small p value in one model but not in the next. (Kirkegaard and Karlin 2020)

If true, this is a significant finding. But is it true?

I see one big problem: the paper compares datasets with very different levels of error. Intelligence was measured by IQ tests under controlled conditions. On an IQ test you cannot make yourself seem more intelligent than you really are, unless someone has provided you with the right answers.

This is not the case with the method for measuring the other mental traits: a questionnaire, on which the "right answer" is whatever the respondent chooses to write down. The difference between the two methods is thus the difference between direct measurement and self-report. The level of error is much higher with the latter, and this difference can explain the findings by Kirkegaard and Karlin, specifically why national well-being correlates more with intelligence than with time preference:

The problems with questionnaire data are especially apparent if we look at the results of the Global Preference Survey for altruism (see map at the top of this post). We see considerable differences even between neighboring countries that are culturally similar. For some reason, Czechs are at the low end of human variation in altruism, whereas Moroccans, Egyptians, and Bangladeshis are at the high end.

What’s going on here? The results are based on the following two questions of the Global Preference Survey:

1. (Hypothetical situation:) Imagine the following situation: Today you unexpectedly received 1,000 Euro. How much of this amount would you donate to a good cause? (Values between 0 and 1000 are allowed.)

The first problem is that the respondents will answer the above questions in a way that is viewed favorably by others and by their own conscience. This is called “social desirability bias,” and it’s stronger in a society with a high level of religious belief, like Morocco, than in one with a low level, like the Czech Republic.

Second problem: the term “good cause” has different connotations in different places. In the Western world, it generally refers to a non-religious organization that may endorse controversial views on political or social issues. As a result, many Westerners have mixed feelings about donating to “good” causes. This is not the case in the Muslim world, where “good causes” are explicitly Islamic or at least compliant with Islamic teachings. There is a similar problem with the term “donate.” It usually means the act of giving money to an organization, whereas the corresponding word in another language may simply mean “give.”

I wrote to Emil Kirkegaard about my criticisms:

In my opinion, you're comparing apples and oranges. Cognitive ability is difficult to fake on an IQ test - unless somebody has provided the participant with the right answers. On a questionnaire, anyone can give the "right" answer. It's entirely self-report. It's like measuring intelligence by asking people how smart they think they are.

Your stance on this seems to imply you are unhappy with any kind of comparison of self-rated data vs. objectively scored cognitive data. One difficulty for you here is that people can also cheat on cognitive tests, namely by scoring low on purpose. Furthermore, while you may disapprove, such comparisons are the norm everywhere. I don't know any other person who refuses to do this comparison. There are also other-rated personality data, and these show even more validity than self-rate ones. https://emilkirkegaard.dk/en/?p=6457 There is a lot of research on faking good on personality tests, generally showing that subjects are not very good at this, presumably owing to lack of understanding of how the tests work.

I checked out the link he provided. This is what I found:

Self-rating measures of personality suffer from not just regular, random measurement error, but also have systematic measurement error (bias): people are not able to rate their own personality as well as other people who know them can. They introduce self-rating method variance into the data, and this variance is not so heritable. There is a twin study that used other-ratings of personality and when they used them or combined them with self-ratings, the heritabilities went up:

Emil and Anatoly are right when they argue that intelligence is confounded with other mental traits. If, on average, a human population is high in intelligence, it is almost always low in time preference and high in altruism. This doesn't mean, however, that the latter are secondary expressions of intelligence. Many individuals are high in intelligence but low in altruism, sometimes pathologically low. They're called "sociopaths."

Not for a while. First, because these traits correlate with each other at the population level, it would be difficult to separate them and measure the relative importance of each one. They’re confounded. Second, they probably interact with each other. Altruism, for instance, is not a successful group strategy unless other mental or behavioral mechanisms are in place, in particular mechanisms to exclude non-altruists, i.e., the “free rider problem.” Intelligence, likewise, does not exist in a vacuum.

The mental qualities that make a society workable