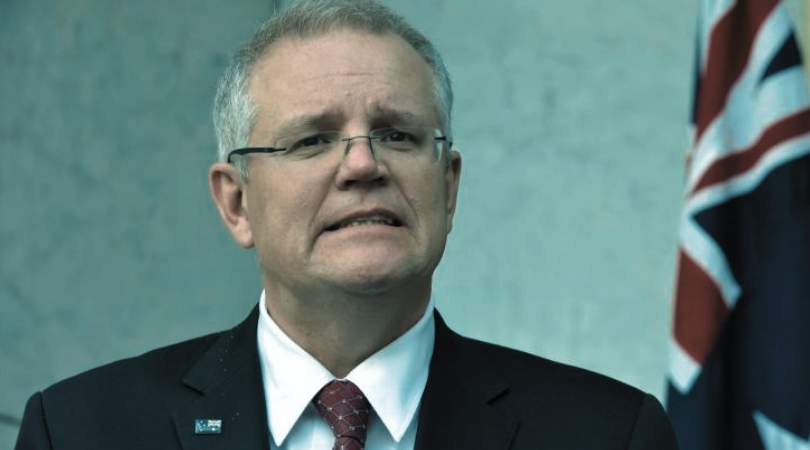 The never-ending contradictions of Scott Morrison

After his performance at Glasgow, the many contradictions of Scott Morrison have been laid bare. Let’s unpack them, shall we?

Scott Morrison truly is a man who contains multitudes. By which I mean he is a PM for whom things like “consistency” and “not contradicting himself on a minute by minute basis” are things for lesser mortals not possessed of his dazzling strategic mind, even though it looks less like six-dimensional chess and more like Connect Four while angrily insisting the discs are all the same colour.

And it would be funnier if it wasn’t so horribly consequential. For example:

Contradiction #1: “Technology Will Save Us!” versus “Technology Is For Nerds What Think They’re So Smart!”

Haters of a habitable Earth rejoiced when Morrison unveiled his government’s Net Zero By 2050 plan, which was broken down into a series of unsubstantiated alternatives to things like, say, carbon taxes or legislated emissions targets or not actively increasing gas and coal extraction.

Indeed, an impressive 15 per cent of Australia’s emissions reductions was ascribed to future technological improvements, presumably because “through magic!” seemed a bit too hippie-friendly.

“The rate of technological advance is a given, it is actually a given in the modern world,” Morrison defensively insisted when questioned about this egregious bit of hand-waving. “To not think that is going to play a role over the next 30 years, that would be the more surprising assumption.”

Of course, despite Scotty’s snide assurances, no one was actually making the assumption that technology has peaked – not least the CSIRO, the government body tasked with the job of being the nation’s peak science organisation and incubator of much of Australia’s biggest technological breakthroughs.

But of course, Morrison didn’t even want to bother the CSIRO with collecting any of that useless “data” stuff when he was putting together his climate plan, choosing instead to use a Liberal-aligned consultancy firm and then not releasing the modelling in any case.

To be fair, that rejection of expertise by actual experts is entirely in keeping with the CSIRO funding cuts of successive Liberal-National governments, and the decision to specifically deny universities access to JobKeeper for no stated reason.

But you know, technology! Don’t need science for that, right?

When you arrive back home after tarnishing Australia’s reputation at a global climate summit, and need to check if the coast is clear: pic.twitter.com/2MNpCIb1DQ

Contradiction #2: “Social Media Must Be Transparent!” versus “…Except When We Use It”

Leaving aside the fact that the PM’s strong words about laying down the law at the G20 about how social media companies be held to account seem to have been totally forgotten once he actually got there, Morrison has been fuming about mean people using fake or anonymous accounts online to spread lies – or, worse still, unflattering truths.

“Social media has become a coward’s palace, where people can just go on there, not say who they are, destroy people’s lives and say the most foul and offensive things to people, and do so with impunity,” he railed in October after cruel allegations about Barnaby Joyce’s daughter were circulated and amplified by Barnaby Joyce.

Strong words, although they presumably, don’t apply to such Coalition superstars as Amanda Stoker, Andrew Laming and – perhaps most famously – Angus Taylor, all of whom used alternative Facebook accounts to say things that they didn’t want to have directly attributed to themselves. Almost like they were in a palace of some type?

Of course, you have to remember to change accounts before praising your own announcement, right Angy?

Contradiction #3: “We Need More Women In Parliament” versus “As Long As I Don’t Have To Help A Bunch Of Girls”

On several occasions, Morrison has bemoaned the relative lack of women in his party and in his government, while simultaneously making clear that it’s really up to women to just stop being so lazy.

Quotas are not the answer, he has made clear, and neither are clearly dumb ideas like “not just handing safe seats to blokes all the time”. And memorably he chose International Women’s Day to inspire Australia’s penisless by assuring ladies that “We want to see women rise. But we don’t want to see women rise only on the basis of others doing worse.”

And there are those who have pointed out that if you insist that success is about merit and then notice that men are disproportionately achieving it then it’s possible that you might have accideliberately mistaken “merit” for “wangsmanship”.

After all, when the former deputy leader of the party suggests she was undermined by a group that called themselves the Big Swinging Dicks, just to have it dismissed by the PM with the argument that if that was true then how did she get to be deputy leader then you’re maybe not taking your own argument too seriously.

But let’s be clear, ladies: if you want to enjoy meritorious success in the Morrison government, it’s very straightforward. You women just need to pull on your big boy pants, stop pussying out and being a Debbie Downer, and have the balls to really man up.

You know, if you want to be one of the guys.

The post The never-ending contradictions of Scott Morrison appeared first on The Big Smoke.

The never-ending contradictions of Scott Morrison